HAWAII (BIVN) - Conditions will be conducive for additional development of a system 1,000 miles south of the Baja California peninsula, as forecasters expect a average to above-average storm season.

HAWAII – Today marks the beginning of the official 2016 hurricane season, and already there is a disturbance out over the Pacific Ocean.

The National weather Service says no tropical cyclones are expected through Friday morning in Central North Pacific, while out over the Eastern North Pacific there is a storm that has a good chance of developing into a tropical depression later this week.

Weather forecasters are predicting a near-normal or above-normal hurricane season with 4-7 tropical cyclones likely. There is only a 20 percent chance of a below-normal season.

A normal season is 4 to 5 tropical cyclones. That includes tropical depressions, tropical storms and hurricanes.

From the National Oceanic and Atmospheric Administration:

This outlook is based on the expectation that El Niño conditions will likely be transitioning to La Niña during the hurricane season. La Niña typically suppresses central Pacific hurricane activity by increasing the wind shear and causing an irregular sinking motion in the atmosphere, both of which suppress storms from forming and intensifying.

However, the central Pacific basin might be shifting toward a more active decadal cycle, in response to changing global sea surface temperatures patterns in both the Atlantic and Pacific Ocean. This combination of competing climate factors, along with model predictions for weaker vertical wind shear and warmer sea surface temperatures in the central Pacific hurricane region, suggest that the hurricane season will likely be near- or above-normal.

This outlook is a general guide to the overall seasonal hurricane activity in the central Pacific basin and does not predict whether, or how many, of these systems will affect Hawaii.

NOAA issued its Central Pacific hurricane outlook at a news conference in Honolulu on May 26th, and urged Hawaii residents to be fully prepared before the hurricane season, which begins June 1 and runs until November 30th.

“Preparation is the key. We all need to engage in planning and preparing right now for the upcoming hurricane season,” said Gerry Bell, Ph.D., NOAA’s lead seasonal hurricane forecaster at the Climate Prediction Center. “Assess the structure in which you live, and take any steps necessary to strengthen it so that it will withstand the tremendous force of a hurricane. Have a plan of where you will go and what you will take with you should an evacuation be necessary. Practice your plan, ensure you have a way to get the latest official forecast and emergency information, and assemble the supplies you might need. Doing these things now will ensure we will all be weather-ready and disaster resilient well before the storms threaten.”

The Central Pacific Hurricane Center continuously monitors weather conditions, employing a network of satellites, land- and ocean-based sensors and aircraft reconnaissance missions operated by NOAA and its partners. This data array of supplies the information for complex computer modeling and human expertise that serves as the basis for the hurricane center’s track and intensity forecasts that extend out five days. The seasonal hurricane outlook is produced in collaboration with NOAA’s Climate Prediction Center – a division of the National Weather Service.NOAA Media Release 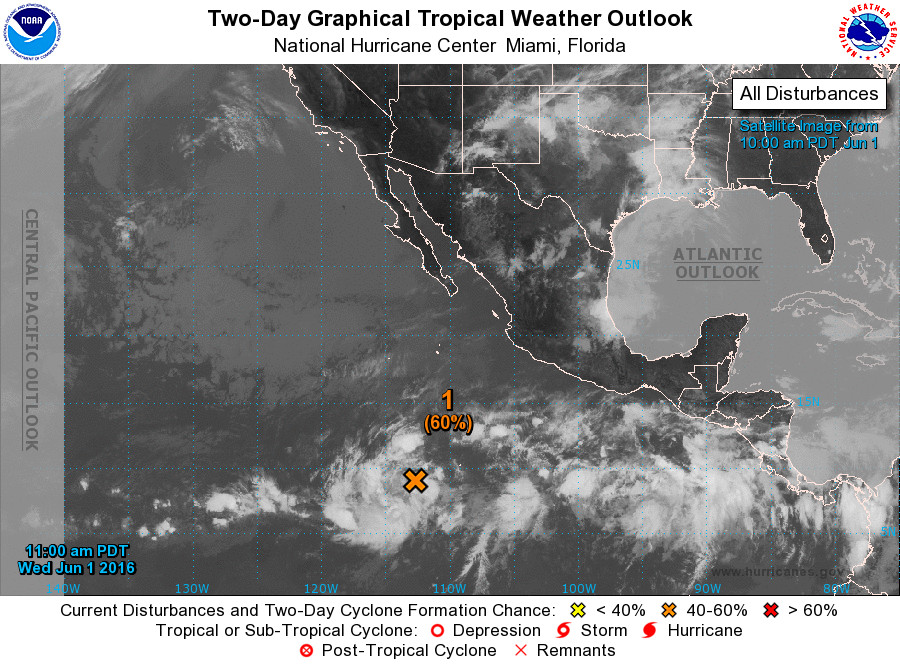 Meanwhile, out over the Eastern North Pacific, the National Weather Service says “showers and thunderstorms associated with a broad area of low pressure located about 1000 miles south of the southern tip of the Baja California peninsula have become a little better organized over the past day or so, but the low does not have a well-defined center of circulation. Environmental conditions are expected to be conducive for additional development of this system during the next several days, and a tropical depression is likely to form later this
week as the disturbance moves west-northwestward at about 15 mph.”