KALAPANA (BIVN) - As the 61g lava flow advances on the coastal plain below the pali, the National Park Service and County of Hawaii share some safety recommendations for volcano enthusiasts.

KALAPANA, Hawaii – At the end of the three mile trek along the Hawaii County-side of the Highway 130 emergency route, lava enthusiasts can get a good look at the 61g lava flow as it slides down the Pulama pali. The flow is hugging the western boundary of the abandoned Royal Gardens subdivision, and part of the active flow is within Hawaii Volcanoes National Park, which borders Royal Gardens to the west.

The county emergency route ends at the border of the National Park. There sits a gate that remains closed and locked.

National Park officials say the gravel route beyond the gate is designated for emergency access only and the park does not encourage its use. The Park Service says the closest viewing of the current flows is from the Hawaii County Lava Viewing Area in Kalapana.

The county lava viewing area is open daily from 3 p.m. to 9 p.m., so if viewers are determined to use the National Park – which is open 24 hours – the park service is offering some warnings and recommendations.

First, the easiest vantage point from the park side is at the end of Chain of Craters Road, past the Holei Sea Arch, where the pavement ends and before the gravel emergency access route begins. Staff and visitors have reported good views of lava streaming down the pali in the evening, but there has been poor air quality at times due to volcanic gas.

Also, overnight camping on the flow field is prohibited.

No matter what side of the park boundary you are on, Park rangers do not encourage visitors to hike out to the flows. From the park side of Chain of Craters Road, it’s a grueling, 10-mile roundtrip hike over sharp, uneven lava rock terrain, rangers say.

All who attempt to reach the lava flows are urged to prepare ahead and bring plenty of water.

The Hawaiian Volcano Observatory (HVO) reports the active lava flow southeast of Puʻu ʻŌʻō continues to advance across the coastal plain on the southern flank of Kīlauea. The flow has spread about 400 yards beyond the base of the pali (cliff) of the abandoned Royal Gardens subdivision; and is about 1.8 miles from the ocean. Bright incandescence is visible from the active lava flow field, and the lava flow does not pose a threat to any community.

Visitors need to be aware of the following reminders:

Our goal is to maintain public safety, protect the interests of Kalapana residents, and protection of the emergency road or Highway 130. We ask for your patience and kokua (help). 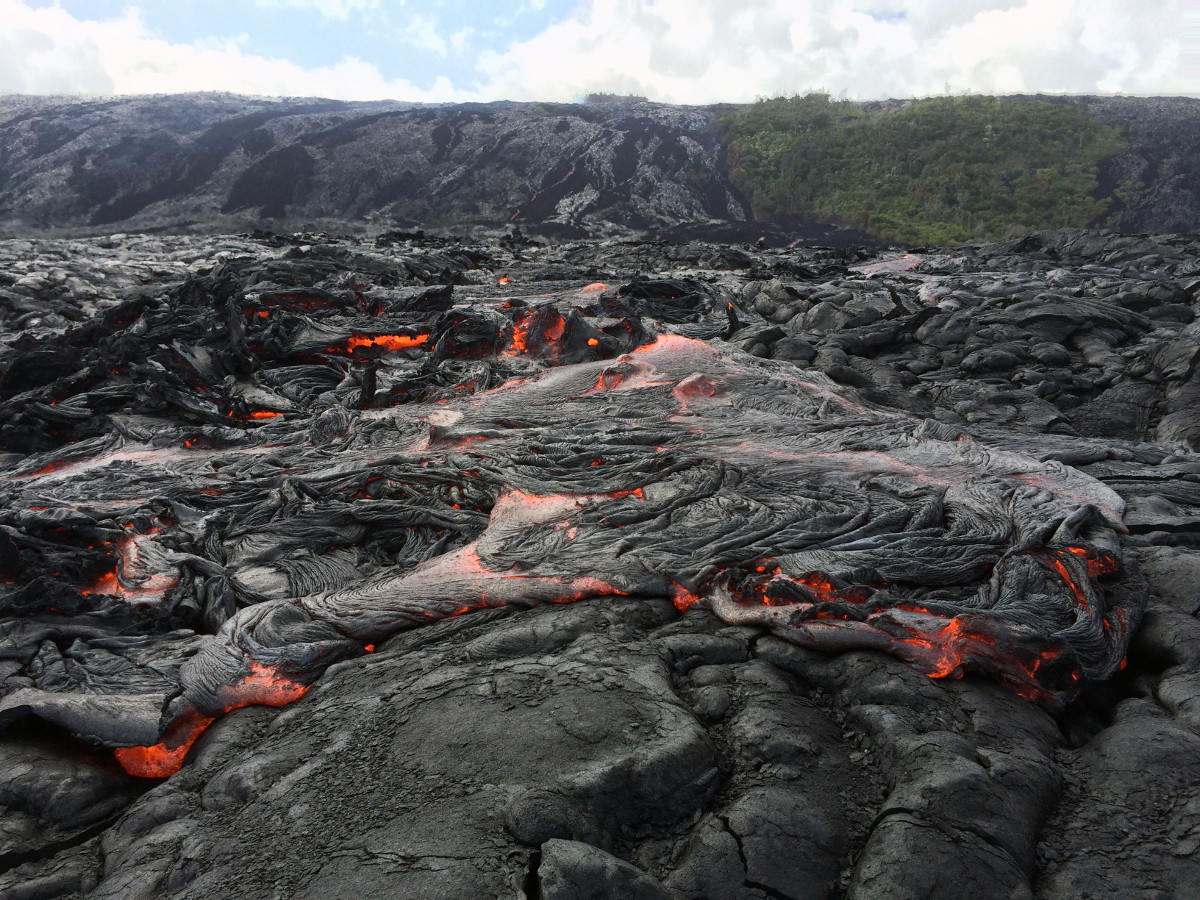