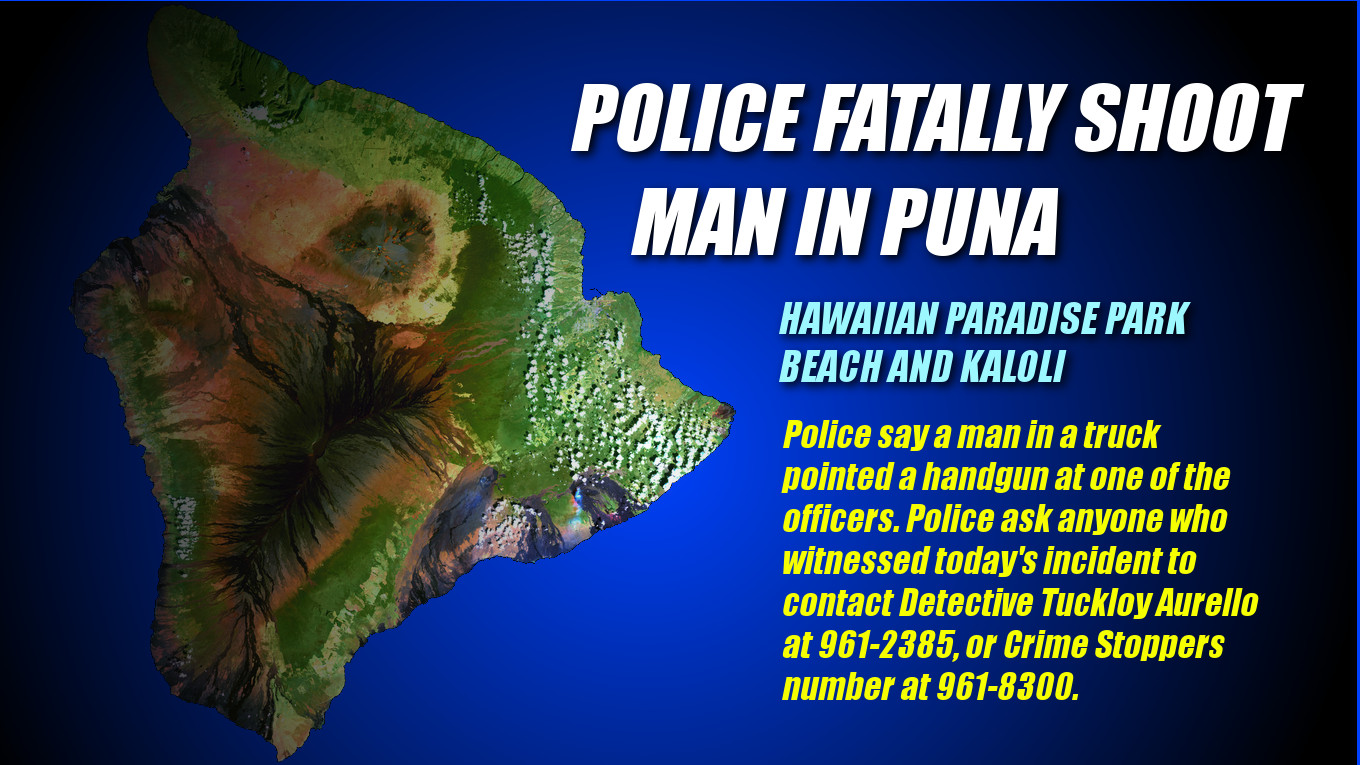 HAWAIIAN PARADISE PARK (BIVN) - Police say they struggled with a man on Beach Road off Kaloli Drive who pointed a handgun at one of the officers before he was fatally shot.

HAWAIIAN PARADISE PARK, Hawaii – Hawaii County Police shot and killed a man who allegedly pointed a handgun at an officer in a Puna subdivision on Thursday.

At 1:20 p.m. police were called to Hawaiian Paradise Park where a man was reported as “possibly armed with a weapon”. Puna District officers combed the subdivision and located the man on Beach Road off Kaloli Drive seated in a pickup truck.

“Two officers approached the vehicle,” police report. “They made contact with the man and a struggle ensued. During the struggle, the man in the truck pointed a handgun at one of the officers. In response, that officer fired his duty weapon, fatally injuring the gunman.”

Police say the man’s name is being withheld pending positive identification and notification of his family. An autopsy will be ordered to determine the exact cause of death.

The officer who fired his weapon has been with the Hawaii Police Department for nine years, police say. The other officer, who has five years’ experience, was taken to Hilo Medical Center for treatment of minor injuries. No officers were injured by gunfire.

“As is standard practice in any police-involved shooting,” police say, “the Police Department’s Area I Criminal Investigations Section will conduct a criminal investigation into the shooting and the Office of Professional Standards will conduct an administrative investigation.”

This is the forth police-involved shooting death on Hawaii Island this year.

On February 9, police shot and killed 38 year-old Ronald Barawis at the Puainako Center McDonald’s drive-through in Hilo, after Barawis reportedly drove his car at officers.

On February 9, police shot and killed 28 year-old Scottie Yanagawa at a Hilo gas station, after Yanagawa reportedly fired a gun at officers.

On June 6, police shot and killed 25 year-old Kalyp Allen Rapoza at a Hilo home, after Rapoza reportedly brandished a knife.

Police ask anyone who witnessed today’s incident to contact Detective Tuckloy Aurello at 961-2385. Tipsters who prefer to remain anonymous may call the island wide Crime Stoppers number at 961-8300 and may be eligible for a reward of up to $1,000. Crime Stoppers is a volunteer program run by ordinary citizens who want to keep their community safe. Crime Stoppers doesn’t record calls or subscribe to caller ID. All Crime Stoppers information is kept confidential.