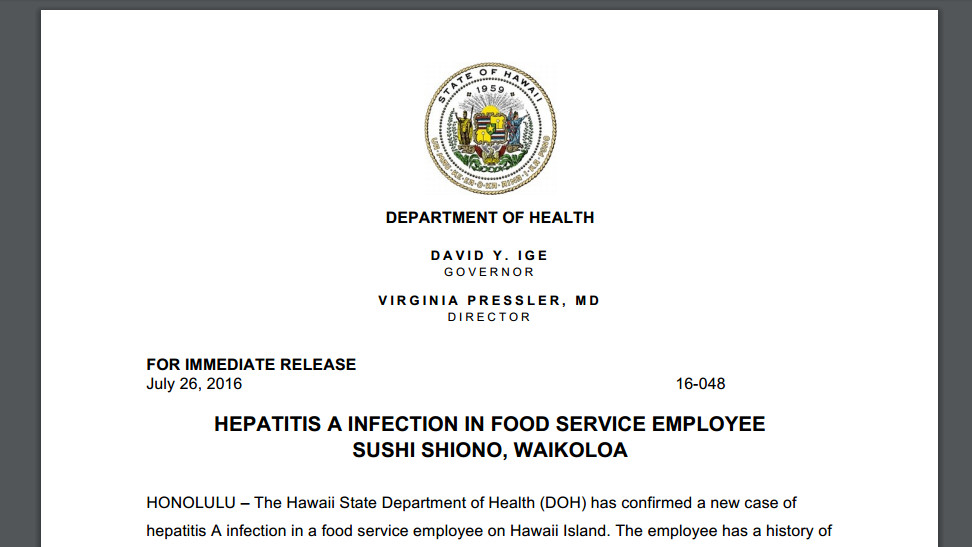 WAIKOLOA (BIVN) - The Hawaii State Department of Health confirmed the new case of hepatitis A infection in a food service employee working at a Waikoloa resort restaurant. The employee has a history of exposure on Oahu.

WAIKOLOA RESORT, Hawaii – A new case of hepatitis A infection has been confirmed in a food service employee on Hawaii Island.

According to the Hawaii State Department of Health, the employee has a history of exposure on Oahu and worked at the fast food and catering restaurant, Sushi Shiono Waikoloa – located at the Queen’s MarketPlace in the Waikoloa Beach Resort – from July 5 through July 21, 2016

“The department is advising persons who consumed any food products from this store during this period that they may have been exposed to the disease,” reads a media release issued Tuesday. “The likelihood that patrons of this business will become infected is very low. However, as a precaution, unvaccinated individuals should contact their healthcare providers about the possibility of receiving hepatitis A vaccine or immune globulin, which may provide some protection against the disease if administered within the first two weeks after exposure.”

There have been 93 confirmed cases of hepatitis A in the State of Hawaii since the outbreak began in mid-June. 29 of those cases have required hospitalization. All cases have been in adults who were on Oahu during their exposure periods.

The source of infection for this outbreak is not yet known. The health department is working to identify it.

“Preventing exposure from infected food handlers is difficult because patients with hepatitis A are most contagious one to two weeks before symptoms start,” said State Epidemiologist Dr. Sarah Park. “It is possible that other food service establishments will be affected with additional new cases.”

All unvaccinated food handlers – persons who directly prepare, serve, or handle food – who have come in contact with confirmed cases of hepatitis A must be tested for infection before returning to work, according to Hawaii State law.

Additional information about hepatitis A can be found on the DOH website.