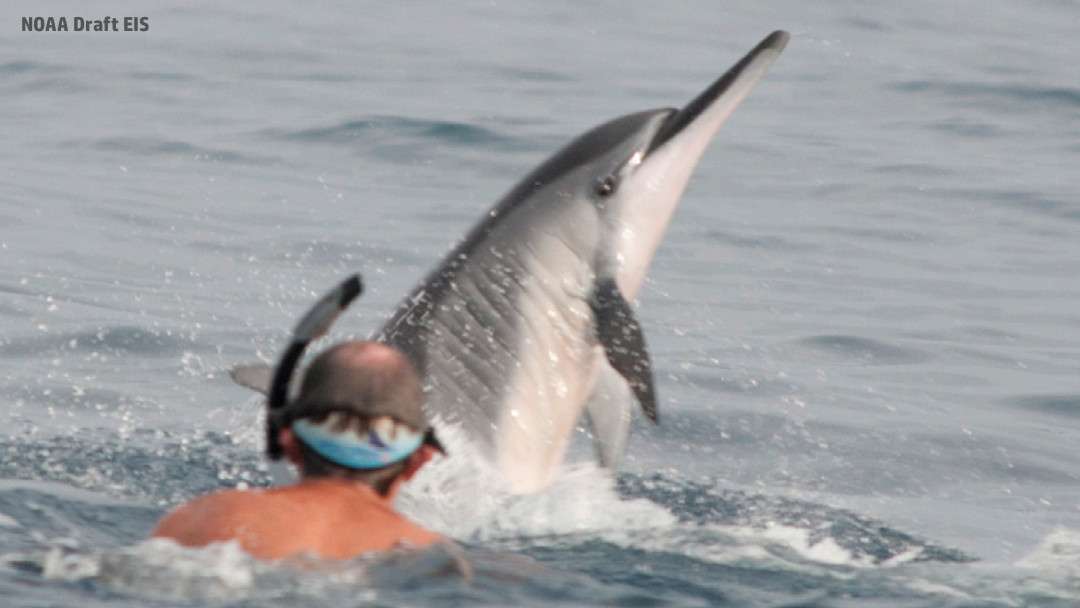 HAWAII ISLAND (BIVN) - The NOAA rules would prohibit swimming with and approaching a Hawaiian spinner dolphin within 50 yards by any means - be it "by vessel, person, or other object".

HAWAII ISLAND – New rules to prevent disturbance and harassment of Hawaiian spinner dolphins are being proposed by the federal government.

The National Oceanic and Atmospheric Administration has announced a series of public meetings scheduled throughout September to collect comments on “dolphin-directed human activities”. The rules would prohibit swimming with and approaching a Hawaiian spinner dolphin within 50 yards by any means – be it “by vessel, person, or other object”.

If implemented, the rules would go into effect “within two nautical miles from shore of the Main Hawaiian Islands and in designated waters between Maui, Lanai, and Kahoolawe where spinner dolphins are found throughout the day,” NOAA says.

NOAA characterizes these regulations as an attempt to stop the “take” of spinner dolphins.

Not everyone who gets to within 50 yards of a spinner dolphin will necessarily be in trouble. NOAA Fisheries identified six situations that would count as exceptions to the rule:

2. Vessels that are underway and approached by a Hawaiian spinner dolphin provided they continue normal navigation and make no effort to engage or pursue the animals.

3. Vessels transiting to and from a port, harbor, or in a restricted channel when a 50-yard distance will not allow the vessel to maintain safe navigation.

4. Vessel operations necessary to avoid an imminent and serious threat.

5. Activities authorized through a permit or authorization issued by the National Marine Fisheries Service to take Hawaiian spinner dolphins.

6. Federal, State, and local government vessels when necessary in the course of performing official duties.

Down the road, NOAA says there could be future rulemaking to enact closures at certain bays at certain times of day.

On Hawaii Island those locations would likely include Kealakekua Bay, Honaunau Bay, Kauhako Bay, and Makako Bay. La Perouse Bay on Maui has also been identified as a candidate for time-area closure.

We expect the Final Rule to publish in the Federal Register in August 2017. The final EIS and Record of Decision is expected to be published in July 2017. A 30-day public review will follow that publication. The prohibitions would go into effect in September 2017. NOAA will continue to work with communities to help them understand how the agency’s proposal may affect them.

Public meetings are scheduled for:

The Department of Land and Natural Resources (DLNR) is supporting the proposed rule.

In a media release, DLNR’s Division of Aquatic Resources administrator Bruce Anderson said “We believe NOAA’s preferred option is reasonable. Two of the five initial alternatives involved closing off entire areas designated as essential daytime habitats. We felt that was going a little too far, but we can support approach rules and eliminating swim-with-dolphins activities.”

Anderson noted that the public comment period for the proposed rule ends October 23, 2016. “We intend to comment,” he said. “The proposed regulations would be in effect within two nautical miles of the main Hawaiian Islands, and within certain designated waters between Maui, Lanai, and Kahoolawe. We will recommend NOAA expand that beyond two miles, all the way out to the limit of the Exclusive Economic Zone, which is 200 miles from shore. We don’t see a rationale for a two-mile limit.”

DLNR says Anderson also hopes NOAA will develop a plan to monitor the effectiveness of the proposed rule, once it goes into effect.