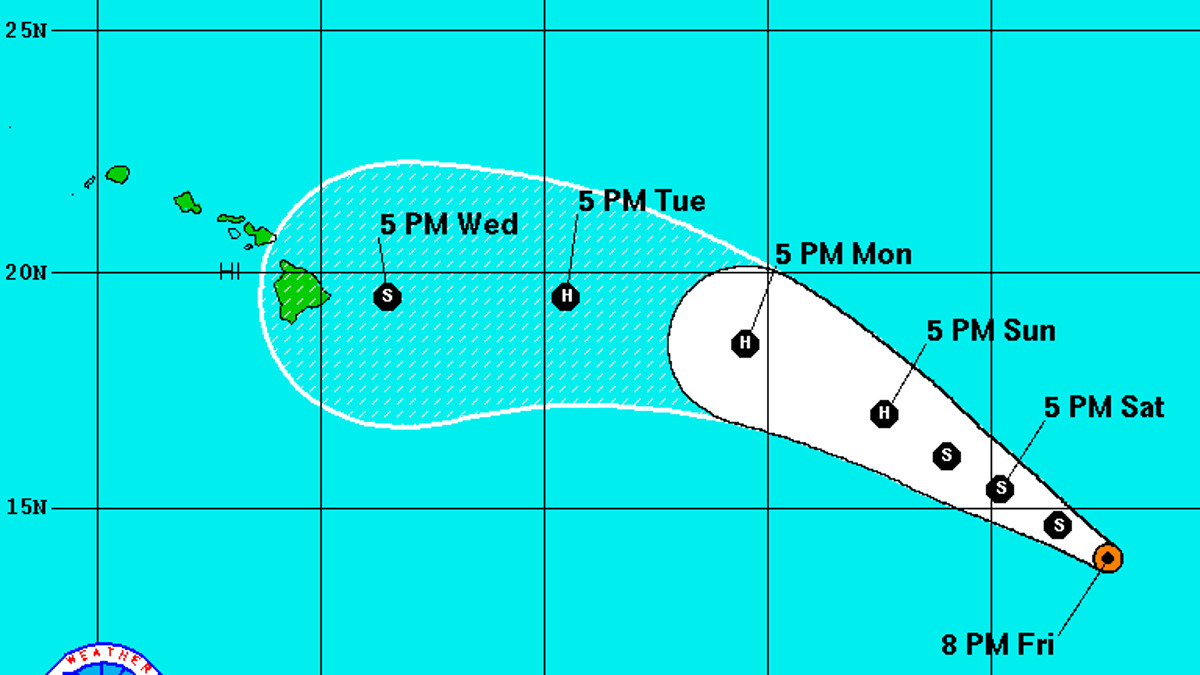 HAWAII ISLAND (BIVN) - Maximum sustained winds have increased to near 40 mph with higher gusts. Some strengthening is forecast, and Madeline could become a hurricane on Monday, the National Weather Service says. 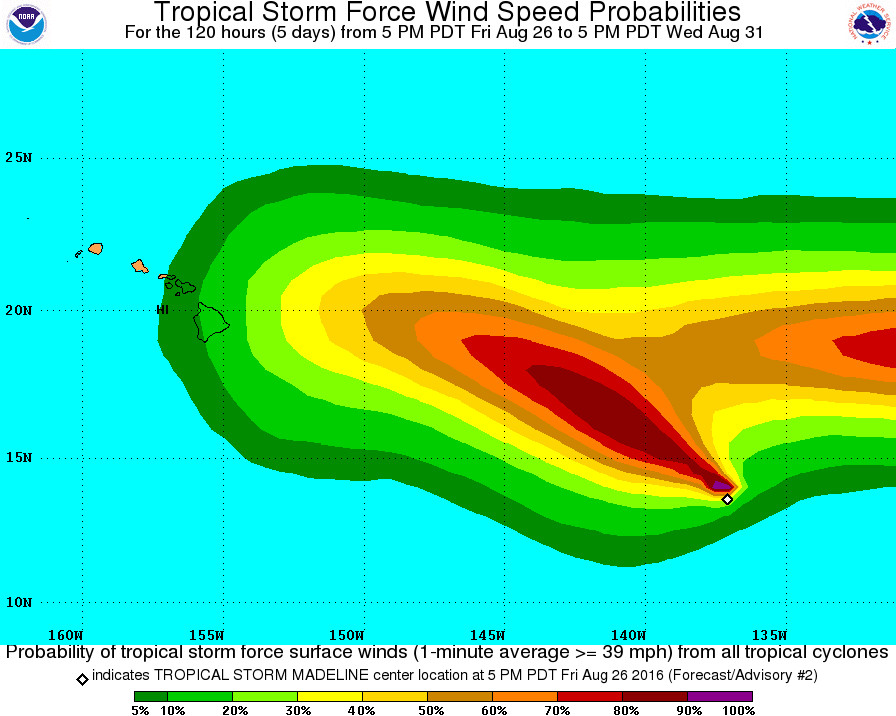 Maximum sustained winds have increased to near 40 mph with higher gusts. Some strengthening is forecast, and Madeline could become a hurricane on Monday, the National Weather Service says.

The early forecast track puts Madeline on a course for Hawaii Island next week. 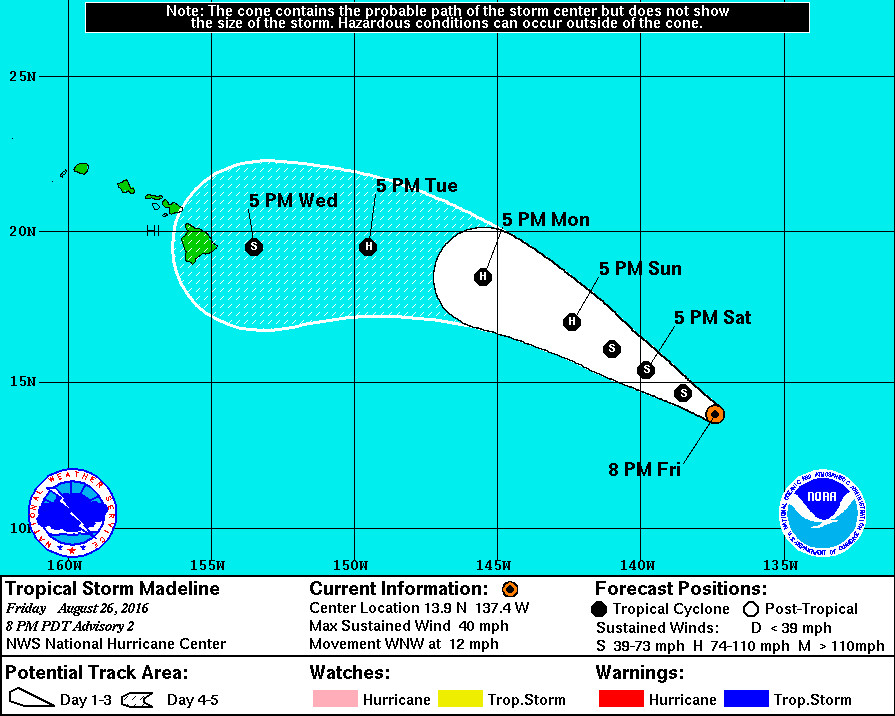 However, forecasters again stress it is “too early to determine what, if any, impacts this cyclone could have on the Hawaiian Islands near the end of the forecast period.”

“It is important to remind users that the average 5-day track forecast error for eastern Pacific tropical cyclones is about 170 miles,” the NWS said at 5 p.m. HST.

Madeline will be moving over SSTs above 27C and in a low-to-moderate easterly shear environment for the next 2 to 3 days. This should allow for steady intensification, and the NHC forecast shows the cyclone becoming a hurricane in about 2 days. Later in the forecast period the SSTs cool and the mid-level atmosphere dries out somewhat, which should induce a weakening trend. The guidance is a little higher than 6 hours ago, and the latest NHC intensity forecast follows the trend, remaining close to or a little below the IVCN consensus through the period.

Satellite fixes continue to show an initial motion of 295/10. Madeline should move generally west-northwestward for the next few days around a subtropical ridge over the eastern Pacific. The cyclone is expected to take a westward turn at long range due to a new ridge building in over the Central Pacific. Models are not in great agreement on exactly when that turn will take place, and the details of the motion appear to be related to exactly how strong Madeline becomes. Overall, the model guidance has shifted a little bit to the north on this forecast cycle, and the latest NHC prediction is adjusted in that direction at days 4 and 5.

Right behind Madeline is Hurricane Lester, which now has an eye and a convective ring.

“Additional intensification is anticipated during the next 2 to 3 days,” weather forecasters say, “while the cyclone continues to move over warm waters and is embedded within light shear. By the end of the forecast period, Lester will probably begin to weaken due to entrainment of drier air. The (National Hurricane Center) forecast follows very closely the model consensus, and shows Lester as a hurricane moving into the Central Pacific in about 5 days.” 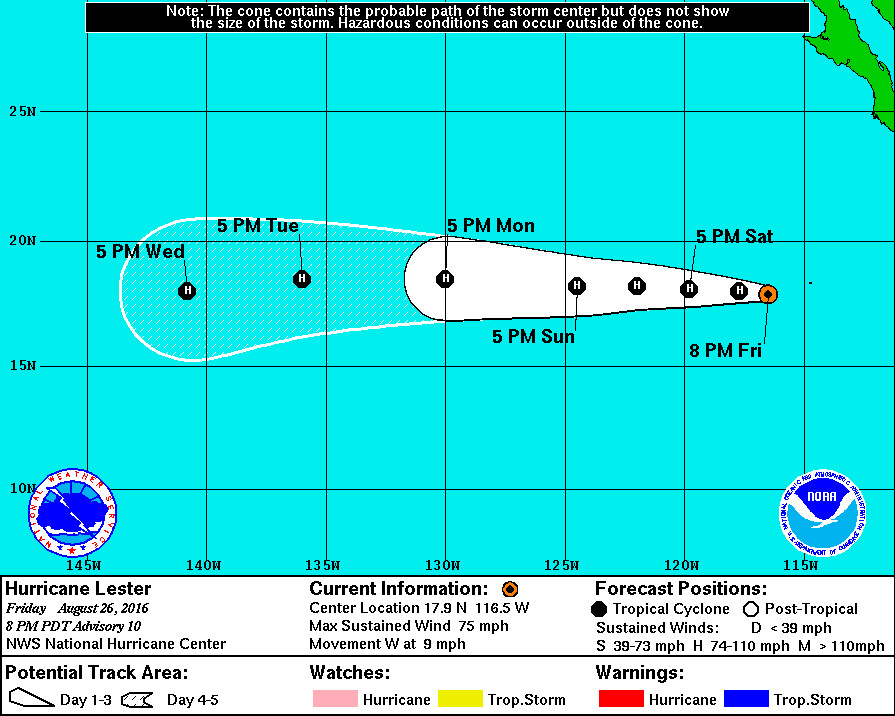