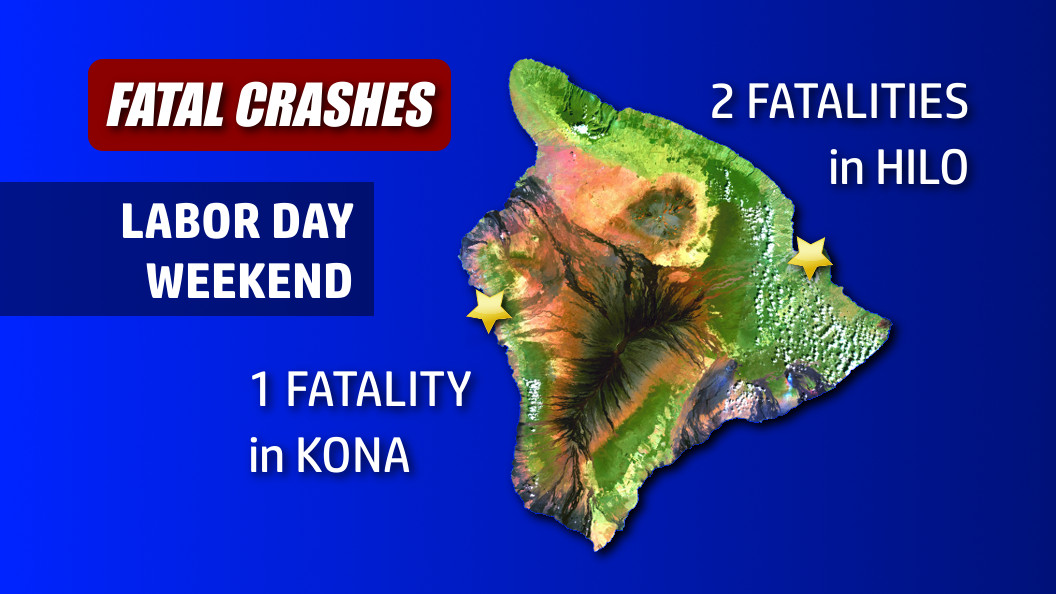 HAWAII ISLAND (BIVN) - These are the 18th, 19th, and 20th traffic fatalities on Hawaii Island this year, compared with 15 at this time last year, police say.

HAWAII ISLAND – Police have identified the vicitms in two fatal crashes that occurred over the weekend on either side of Hawaii Island.

On Saturday evening in Hilo, a 66-year-old Hilo man and a 61-year-old Hilo woman died from injuries sustained in a pedestrian/motorcycle crash on Railroad Avenue at Makalika Street.

Just before the accident, police say Broad exited an unknown vehicle near the intersection of Railroad Avenue and Makalika. The vehicle left the area and Broad, who walked in the north-bound lane, was struck by Chartrand’s motorcycle traveling north on Railroad Avenue.

Traffic Enforcement Unit officers have initiated a negligent homicide investigation for Broad and a coroner’s inquest investigation for Chartrand and have ordered autopsies to determine the exact causes of death. Officers also want to question the occupants of the vehicle that Broad exited.

On Sunday in Kona, a 20-year-old Captain Cook woman died from injuries she sustained in a two vehicle head-on collision on the Highway 11, just south of the Kamehameha III Highway intersection.

Police have identified her as Breanna Fujimoto of Captain Cook.

Police determined that Fujimoto was driving a 2016 Honda sedan south on the highway when her sedan crossed the centerline of the roadway and crashed head-on with a 2015 Nissan SUV traveling the opposite direction.

Fujimoto was taken to Kona Community Hospital, where she pronounced dead at 4:19 a.m. Sunday (September 4).

The driver of the SUV, a 38-year-old Kealakekua woman, and her two children – an 11-year-old boy and a 13-year-old girl – were also taken to Kona Community Hospital. The woman and the girl were treated and released from the hospital. The boy was transferred to The Queen’s Medical Center on Oahu and was listed in stable condition, police say.

These are the 18th, 19th, and 20th traffic fatalities on Hawaii Island this year, compared with 15 at this time last year, police say.