WAIMEA (BIVN) - Tennentʻs legacy, which “towers above the entire roster of painters ever to have worked in Hawaiʻi in terms of originality and breadth of vision," is featured at Isaacs Art Center.

WAIMEA, Hawaii – She is said to be one of the most pioneering and prolific artist to have worked in Hawaii, and now over 40 of her works are on display at the Isaacs Art Center at Hawaii Preparatory Academy in Waimea.

The exhibition Rhythm in the Round: The Modernism of Madge Tennent, runs now through November 12. The exhibition showcases five decades of Tennentʻs work.

An opening reception was held on September 9th.

Tennentʻs legacy “towers above the entire roster of painters ever to have worked in Hawaiʻi in terms of originality and breadth of vision,” said David W. Forbes, author of Encounters with Paradise. Forbes was quoted in a media release courtesy HPA. 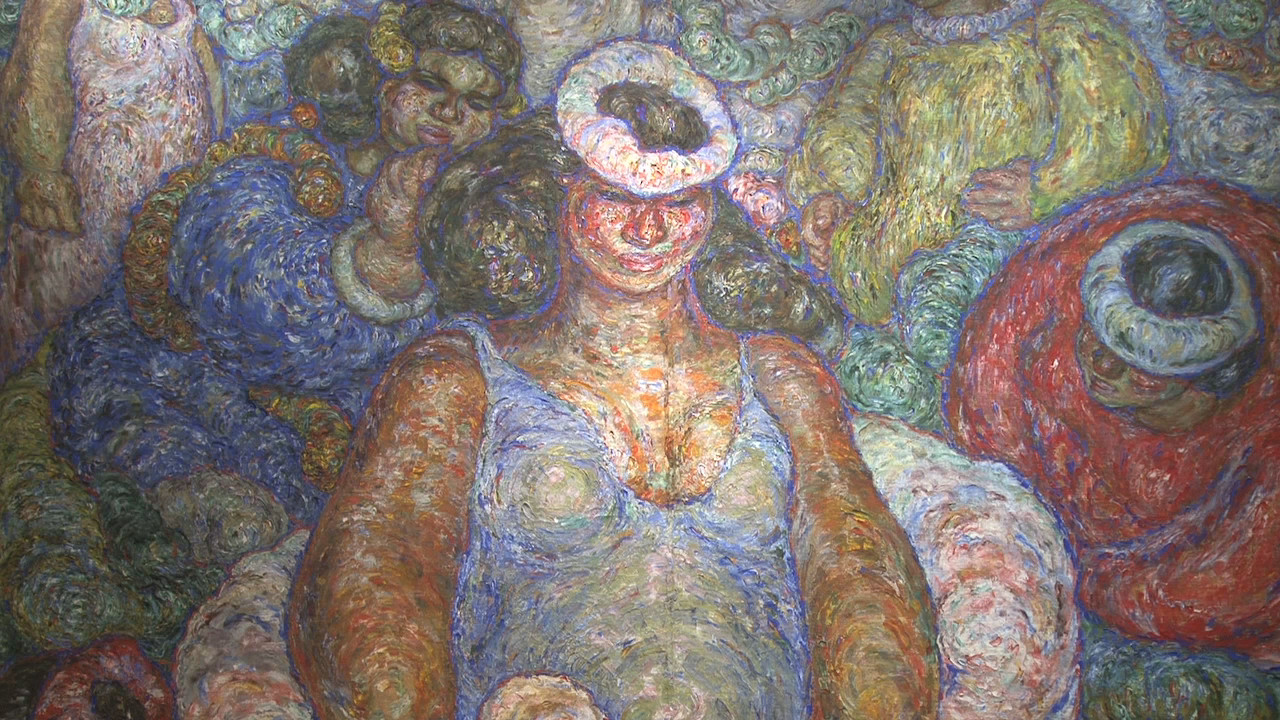 Rhythm in the Round includes more than 40 works by arguably the most pioneering and prolific artist to have worked in Hawaii, featuring prints and paintings created while the artist lived in Paris, Cape Town, New Zealand, British Samoa, and Hawaii. Drawn largely from the Tennent Art Foundation Collection, entrusted to Hawaii Preparatory Academy in 2005, this survey explores Madge Tennent’s trajectory from a young prodigy in training at the renowned Académie Julian into a monumental legend in the annals of Hawaiian art. Interspersing Tennent’s works among those of her predecessors, peers, and successors, this exhibition underscores Tennent’s pivotal place in and indelible impact on the art of Hawaii, and positions her within broader contexts of 20th-century depictions of Hawaiian culture, the islands’ transition to statehood, contemporaneous discourses on ethnicity and gender, and modern art on a global scale.

“The Isaacs Art Center is honored to be the home of Madge Tennentʻs seminal work,” said Mollie Hustace, director of the Isaacs Art Center. “This monumental show features her signature paintings that embrace the ideal beauty, regal nature, and dynamic culture of the Hawaiian people she so revered.”

Tennent transformed the world’s vision of the islands and their inhabitants. Born in London in 1889 and raised in Cape Town, she demonstrated promising talent as a child. At age 12, just months into her training at the Académie Julian in Paris, Tennent was invited to study directly under renowned master William-Adolphe Bouguereau, who saw in her the makings of a great artist. Having completed her training, she married Hugh Cowper Tennent in 1915 and followed him first to his native New Zealand and then to British Samoa.

En route to London in 1923, the Tennent family stopped in Honolulu and was persuaded to stay. Hawaii’s bright, tropical hues fueled the artistʻs enchantment with color, and she adapted line and form to the vivid medium of oil. The culture and heritage of Hawaii’s “golden people” quickly set Tennentʻs imagination ablaze, and she devoted decades to developing an aesthetic that emphasized the unique qualities of Native Hawaiians: curvaceous forms, voluminous garments, serene faces, and implicit nobility.

In her Autobiography of an Unarrived Artist, Tennent wrote, “I have built my Hawaiian figures in art, in the manner of building a cathedral: cathedrals are built slowly, and the people who build them seldom experience the joy of seeing their life work completed, but are sustained only by the instinctive faith that their work is important and beautiful.”

Tennent’s iconic imagery first surfaced in Reclining Girl (1929), a pivotal work in which she synthesized the languid femininity of European modernism with her own ethnic fascination. In the mid-1930s, she began executing the colossal, chromatic, and curvaceous oils of Hawaiian women that remain her signature today; these iconic paintings, such as Local Color and Hawaiian Bride, anchor the exhibition. Even in the face of widespread acclaim, she held fast to the conviction that the artist must “evolve through conscious effort.” This effort led Tennent to transition from vibrant colors to subdued monochromes in the early 1940s, a shift made strikingly evident in works like The First Hawaiian Bible and Hawaiian Three Graces. Her iconic Hawaiian wahine (women) were exhibited to critical acclaim in London, Paris, Cairo, Sydney, Chicago, San Francisco, and the New York World’s Fair of 1940.

Tennent later consulted historic photographs to create painted and drawn portraits of the Hawaiian alii, including King Kamehameha and Princess Kaiulani. Though Tennent continuously diversified until her death in 1972, she never tired of her beloved Hawaiian subjects.

Upon her passing, the Hawaii State Senate passed a resolution in her honor, stating, “Better than any other artist to date, Madge Tennent was able to capture and honestly express in her many paintings and drawings the subtle charm and quiet grace and dignity of Hawaiian people…Madge Tennent having spent half a century in Hawaii, leaves behind a rich legacy of art, which shall forever belong to Hawaii.”

The Isaacs Art Center, home to the world’s largest Madge Tennent art collection, is located at 65-1268 Kawaihae Road, adjacent to the HPA Village Campus, in Waimea. Admission to the center – which is open from 10 a.m. to 5 p.m. Tuesday-Saturday – is free of charge. For more information, visit isaacsartcenter.hpa.edu.