HILO (BIVN) - Terri Napeahi's twenty year quest to learn about a stone in an old family photograph ends with an important cultural designation. 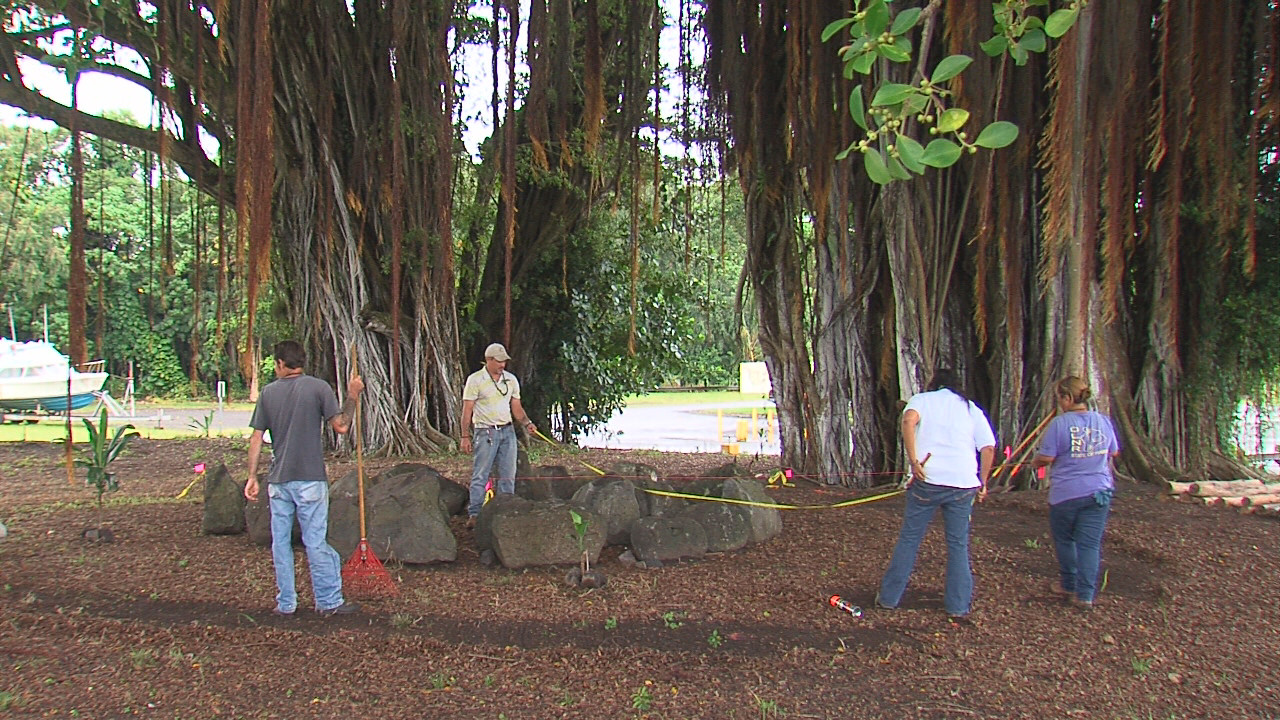 State workers prepare the area around the stones that once belonged to Kuakaananuu Heiau.

HILO, Hawaii – Work began Tuesday on a project to protect a set of large ceremonial stones saved and relocated from a legendary Hilo heiau that was lost over 200 years ago.

Kuaka’ananu’u Heiau was massive, standing at least 60 feet tall. It was located across from Mokuola in an area then-known as Makaoku, says Terri Napeahi, now occupied by Queen Lili’uokalani Gardens and Banyan Drive.

Kuaka’ananu’u was one of very few heiau known to be built like a pyramid with a middle chamber, where “victims were killed by two priests who stood on either side and dropped a heavy stone named Makaoku‘i ka lani,” according to century-old writings by Theodore Kelsey.

Napeahi, whose family had kuleana on the crown lands in Waiākea Ahupua‘a from the time of the Great Māhele, researched the history of the heiau and worked to gather the few remaining stones at their new location near the Wailoa Small Boat Harbor. Her curiosity was initially spurred by an old photograph, taken in 1920, showing her great great grandfather George Kahilihiwa Kekaula and her great grandfather David Napeahi standing with a large stone. Napeahi later learned this stone was none other than Makaoku‘i ka lani, which is now in her possession.

Details of Napeahi’s quest to learn about Kuaka’ananu’u – and her family connection to it – are detailed in a December 2015 environmental assessment for the development of sports fields on Kuawa Street, a portion of which is printed below.

Napeahi is now getting help from the state. Archaeologists Tracy Tam Sing and his team are spending the next few days installing a wooden fence around the stone formation, and plan to erect an interpretive sign explaining the significance of the stones and the heiau.

The Napeahi ohana were on hand for the rainy Tuesday morning gathering, and gave their blessing before the work began. Students from Ke Ana La’ahana charter school in Keaukaha offered a chant.

At some time in the future, Napeahi plans to place Makaoku‘i ka lani in the center of the arrangement. 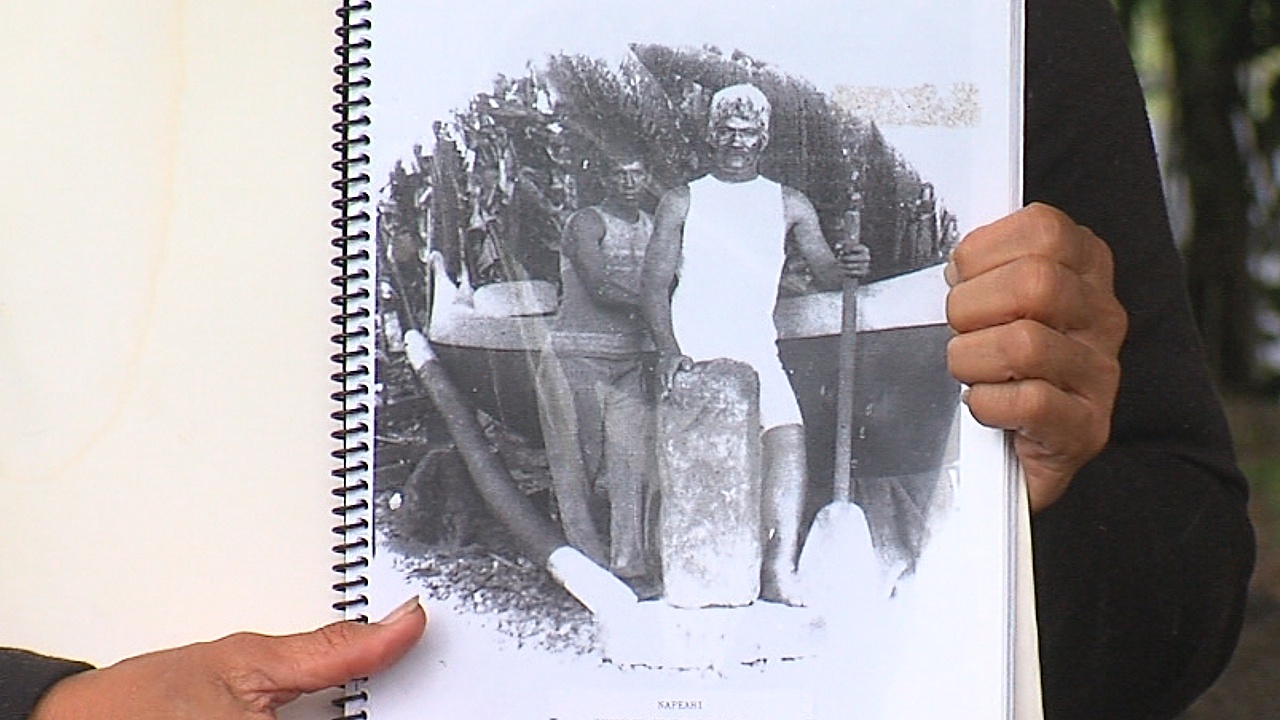 George Kahilihiwa Kekaula and his son-inlaw David Napeahi stand with the stone, Makaoku‘i Ka Lani, in this ca. 1920 photo by Theodore Kelsey.

Terri Napeahi is a descendant of the original recipient of one of the three kuleana properties that fall within the current study area. Terri was born in 1961 to Hawaiian parents that trace their roots to the early days of Waiākea Ahupua‘a. Terri’s personal connection to the land and her ancestors remains strong. For the past twenty years Terri has been pursuing her family’s history and in particular, seeking evidence of the Napeahi Family link to an ancient heiau known as Kuakaananuu, which was located on the shore opposite Mokuola (Coconut Island). According to family oral history, her ancestors were associated with the traditional activities that took place at Kuakaananuu Heiau (perhaps the same as Makaoku Heiau so dubbed by Hudson (1932) and earlier Thrum (1907)). Typescript notes in the Bishop Museum prepared by Theodore Kelsey in the early 1920s seems to match the Napeahi oral history with respect to this heiau:

The heiau of Kuakaananuu, which formerly stood on the land of Makaoku was a pyramidal structure about sixty feet high perhaps, which was connected with the puuhonua of Mokuola. The stones were taken by Capt. Spencer in the sixties for a boat landing. The stones marking the site of the lua pa-u, or bone pit, may still be seen in the ground mauka of the big kamani tree. The victims were killed by two priests who stood on either side and dropped a heavy stone named Makaoku‘i ka lani, still preserved by and old man of Waiakea, on their chests, as they lay bound to the big square stone of Makaoku‘, now at the end of the landing. They were then hung on the lele, or scaffold, for a day and a night, after which they were layed on a stone named Poha‘ Kau, which for sometime lay just off shore a little to the left of the present Mokuola landing, but is now broken up, and covered the body with lau hulu, or dried banana leaves, during one or two nights of pule, after which the body was suspended from a double canoe and the body sprinkled with horse-tails of ahala, or the root of the hala, by two men. After this, about twenty days from the time of death, the body might be taken by relatives and holeholed, or stripped, when the flesh was thrown into the lua pa-u and bones taken to Kaula‘inaiwi to dry. (Kelsey n.d.)

In addition to recording oral traditions of the Hilo area, Kelsey also took photographs of his informants. In one of his photographs (Figure 39), which was reproduced in Kelly et al. (1981:98), Kelsey depicts two Hawaiian men standing behind what appears to be Makaoku‘i Ka Lani (it is perhaps these men that shared information with Kelsey about Kuakaananuu Heiau and it is perhaps the older of the two who Kelsey is referring, when he states “still preserved by an old man of Waiakea”). When shown a copy of this photograph, Terri was able to identify the older taller man in the photograph as her great great grandfather George Kahilihiwa Kekaula and the other man as George’s son-inlaw and her great grandfather David Napeahi. Terri also identified the upright stone as Makaoku‘i Ka Lani, which is currently in her possession.

Terri Napeahi’s quest also led her to identify a pile of large water rounded stones, currently situated in the Wailoa Boat Ramp parking lot under a tree (Figure 40), as additional pōhaku from the former Kuakaananuu Heiau. These stones were moved to this location from the vicinity of the Mokuola parking lot when it was renovated, and she believes that these are some of the stones that her family oral traditions recount as be retrieved and curated.

When asked about the proposed park project, Terri was in favor of creating more sports fields for the community youth. She did express that the early history of the area (the use of the area by her ancestors) should be an important element of public interpretation associated with park development. She also requested that an area in a portion of the park in the vicinity of her family’s former kuleana land be used for the establishment of a cultural preserve where all of the known pōhaku–including Makaoku‘i Ka Lani–from Kuakaananuu Heiau could be assembled, where interpretive material can be displayed telling the story of the events and practices associated with the heiau, and where Terri and others could exercise modern cultural practice.