The informational meeting was organized by the Hawaii Department of Land and Natural Resources’ Division of Boating and Ocean Recreation. Tour operators were presented with the new regulations for the Makako Bay and Keauhou manta ray viewing sites.

DLNR says it has come to their attention that “commercial manta ray night snorkeling and diving at these two popular sites has expanded considerably and the activity is in need of regulation in order to preserve the resource and prevent the dangers posed by overcrowding.”

Maria Robben Gaydos of DOBOR, who coordinated and conducted stakeholder interviews and assessed regulatory frameworks for the “Manta Ray Viewing Boating Operations and Safety Assessment”, led the discussion on the proposed rules.

In a nutshell, the new rules will: 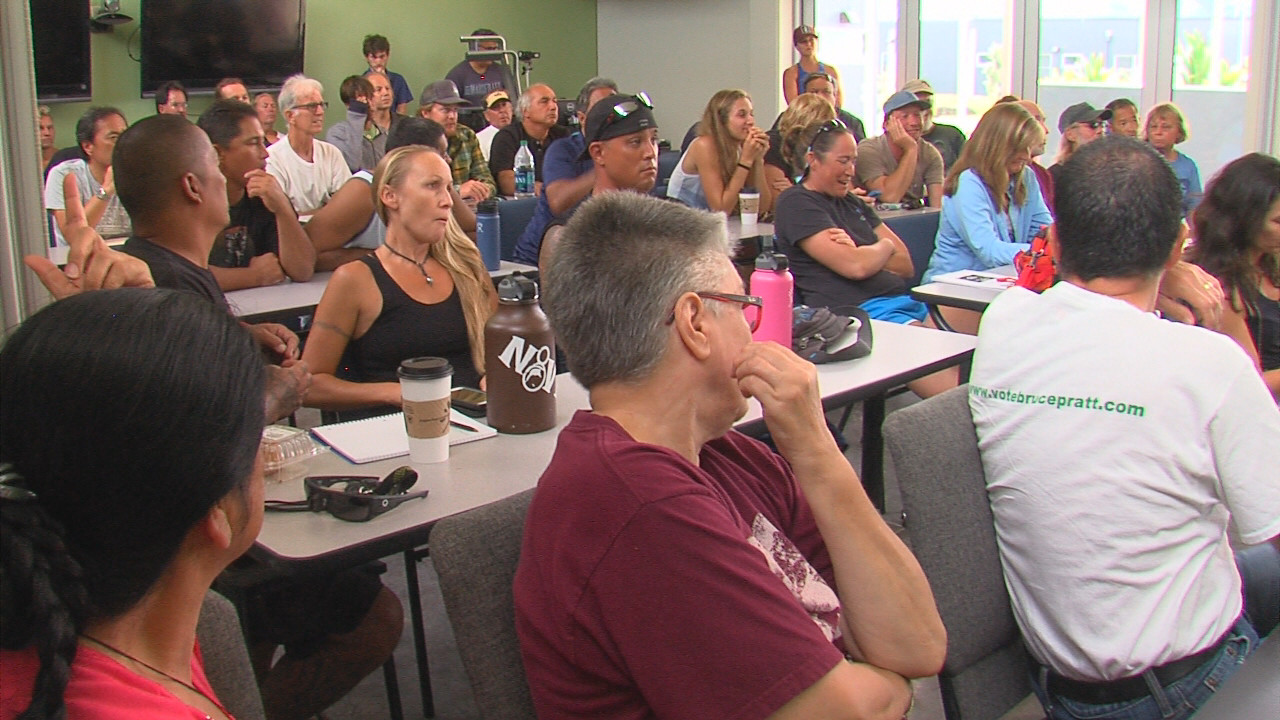 The Department of Land and Natural Resources’ public information meeting was held on Saturday (Sept. 24) to discuss proposed rules for the Makako Bay and Keauhou manta ray viewing sites in Kona. The meeting, held at the Palamanui Campus of Hawaii Community College, was rescheduled from Sept. 3 due to severe weather forecasts earlier this month. 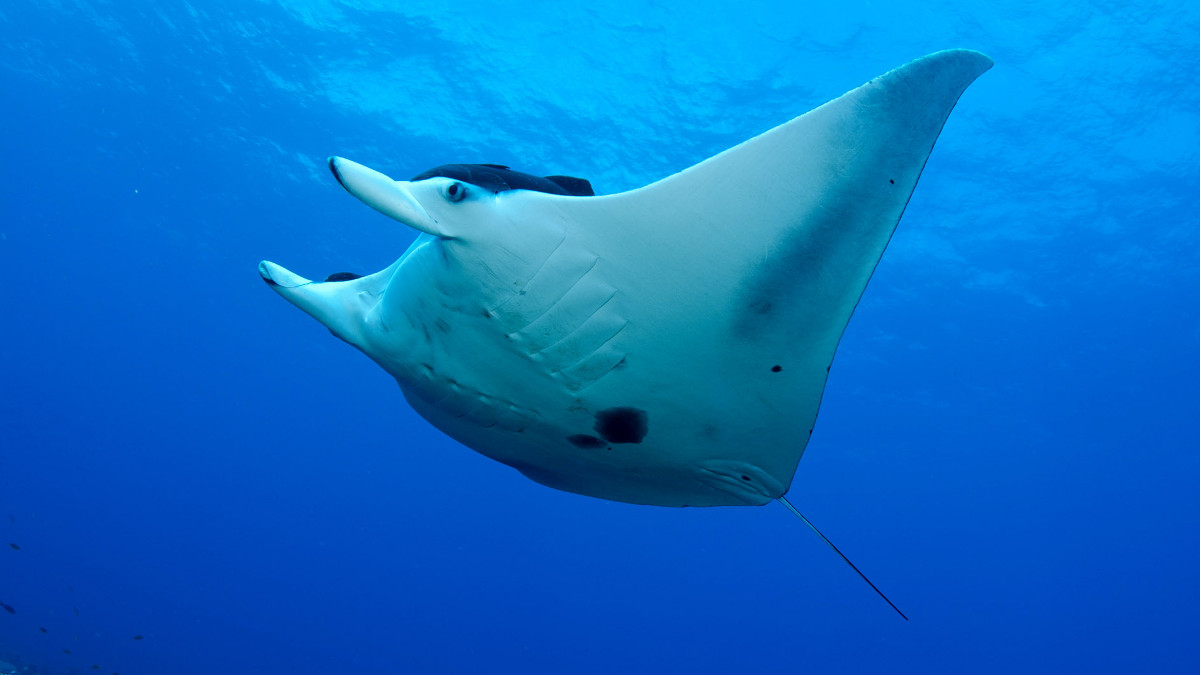 Manta rays, or hahalua in Hawaiian, are one of the largest sea animals in the ocean, with wing-like pectoral fins that can span over 20 feet across. Manta rays are related to sharks, and are divided into two species – the larger, migratory Manta birostris, and the smaller, near shore Manta alfredi, which is more commonly sighted in Hawaii. Manta rays have spot patterns that are unique to each manta and can be used for accurate identification, according to the Manta Pacific Research Foundation, which maintains a catalog for the Manta Identification Project started in 1991 by Keller Laros.

MORE on manta rays in Hawaii. 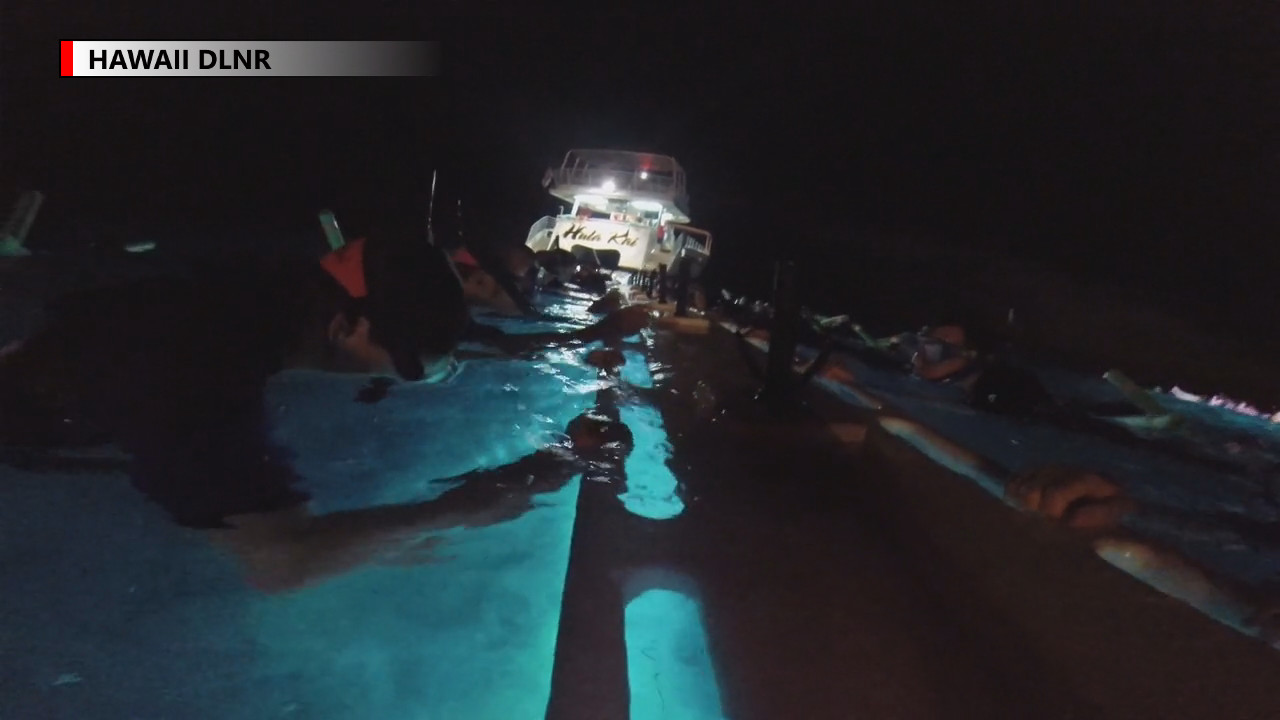 Manta ray viewing tours are presently conducted on the Kona coast in two specific areas where mantas tend to congregate at night to feed on plankton: at Makako Bay, also known as Garden Eel Cove, and at the coastline fronting the Sheraton Keauhou Bay Hotel, at Pa’akai Point. “The activity has become so popular in recent years that it has reached a point that is unsustainable and unsafe,” stated the Hawaii Department of Land and Natural Resources in 2016. “Regulation is needed to preserve the resource and address the dangers posed by overcrowding of boats and swimmers/divers in the water.” 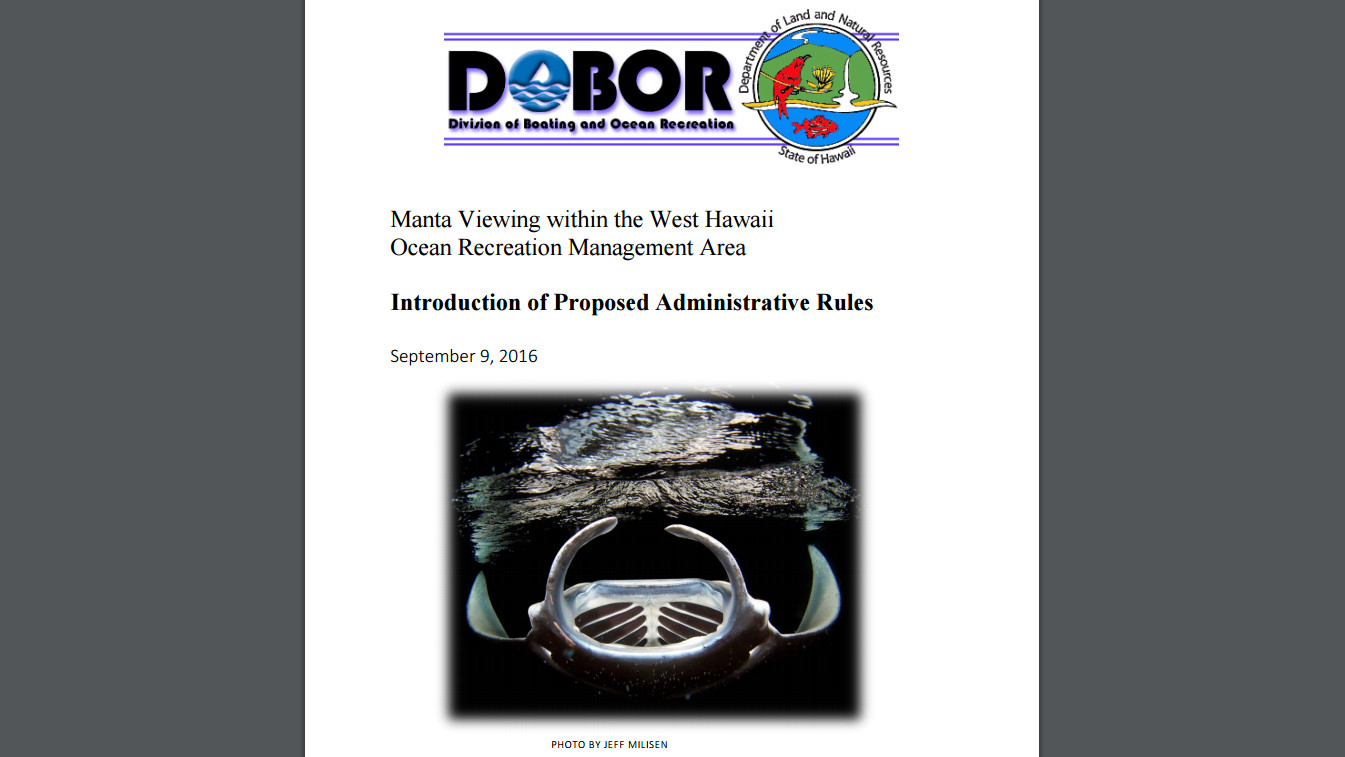 Cover for the Introduction of Proposed Administrative Rules for Manta Viewing within the West Hawaii Ocean Recreation Management Area (September 9, 2016)

The DLNR’s Division of Boating and Ocean Regulation has drafted a proposed management plan and potential management options for the sites based on two years of collected stakeholder input. “The proposed management plan contemplates strategies such as prohibiting anchoring at the sites, limiting the number of commercial operators, prohibiting rafting, and restricting live boating to improve safety,” the state says. The draft “Introduction of Proposed Administrative Rules” is available for review. A public hearing on the draft plan will likely be held in early 2017, with possible Board of Land and Natural Resources’ approval in August.

DOBOR staffers have been working closely with DLNR Division of Aquatic Resources staff, commercial tour operators, the staff of the Sheraton Keauhou Bay Hotel and other stakeholders to draft administrative rules to mitigate environmental hazards and decrease the potential risk for accidents causing harm to people or manta rays.

In 2016 DOBOR has been surveying the two manta viewing sites to determine where and how additional moorings could be placed to alleviate coral damage from vessel anchoring and allow for a safe, sustainable and environmentally conscious regulation of commercial manta diving activities.

DLNR says the following rules and restrictions would be applicable to both sites and be written into administrative rule: 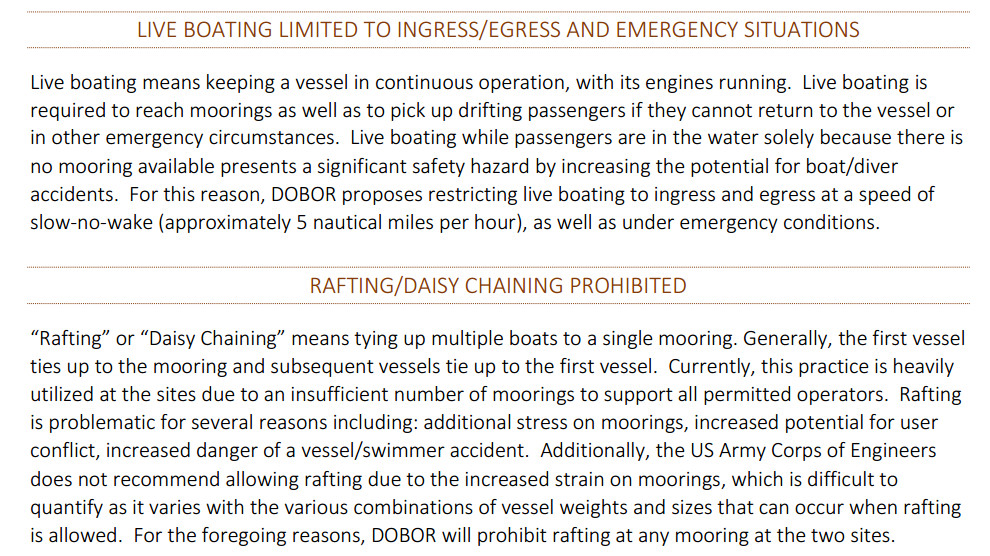 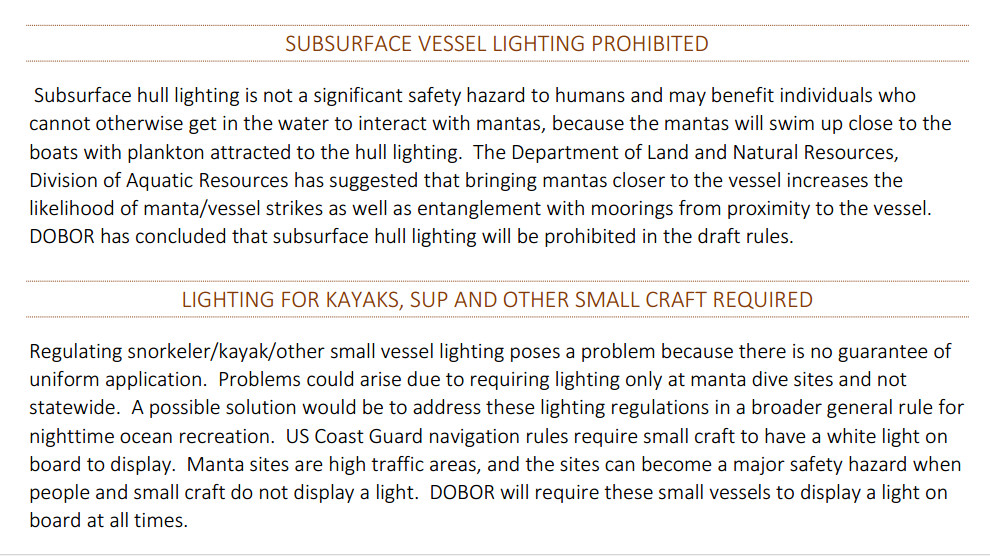 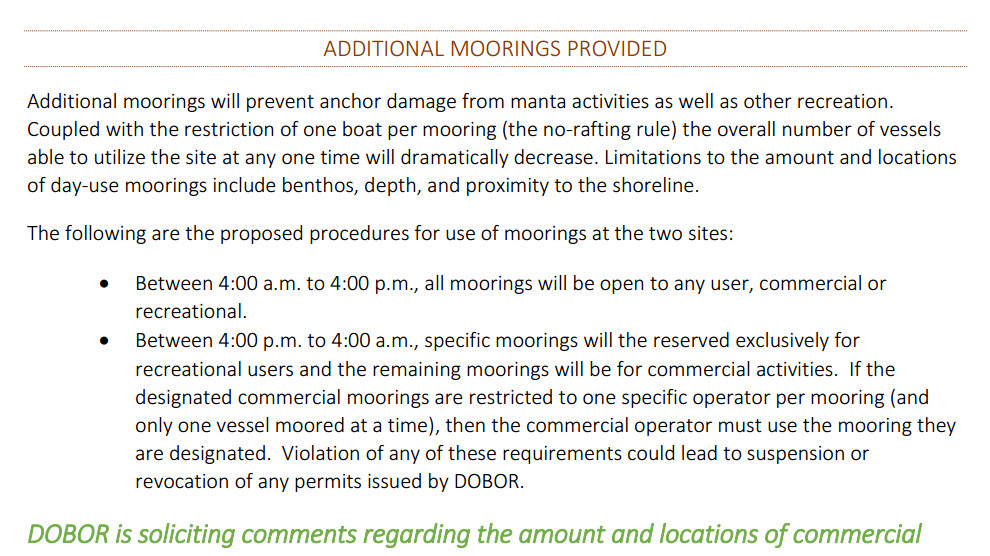