MAUNA KEA (BIVN) - Before departing for the site visit, Judge Amano informed drivers in the caravan that there would not be any stops because "safety is the primary concern."

MAUNA KEA, Hawaii – A caravan of 4-wheel drive vehicles and tour vans ascended to the summit of Mauna Kea on Monday for a special site visit, part of the second Thirty Meter Telescope contested case hearing.

The purpose of the site visit was to allow Hearing Officer and retired judge Riki May Amano and the participants in the contested case to see “first-hand the location and observable impact of the TMT project.”

A handful of contested case participants – and several Mauna Kea rangers and DLNR DOCARE officers – were present for the site visit.

Before departing from the mid-level visitor center at Hale Pohaku, Judge Amano informed the drivers in the caravan that there would not be any stops because “safety is the primary concern.”

“They’re worried that if anything happens, somebody’s gotta get down,” Amano explained, “we can’t be held up someplace.”

The site visit included a drive-through of the proposed TMT site on the northern plateau of the summit area, back up and around the Summit Loop road near the Keck Observatory and Subaru, and finally the area set aside for the batch plant which will support the construction of TMT.

The caravan made note of two ahu, or Hawaiian stone altars, constructed last year by TMT opponents on the site of the planned observatory. One of the ahu was recently the subject of controversy for being the receptacle of iwi, or human remains; an event that divided the community. An online petition asking the State of Hawaii to “Remove the Illegally Placed Iwi from the TMT Site” is now gaining signatures.

Judge Amano also made note of ho’okupo placed where a third ahu – built last year on the gravel road to the summit – was reportedly bulldozed by Mauna Kea Support Services. The destruction of the ahu drew criticism from the Office of Hawaiian Affairs.

Media was granted permission to join the caravan, but were confined to a designated vehicle, and only permitted to step out of the car for a brief moment at the TMT site in order to get an image of the balloon. Big Island Video News and the Hawaii Tribune-Herald were driven by DLNR communications manager Dan Dennison and joined in the vehicle by University of Hawaii director of communications Dan Meisenzahl.

The only other stop made during the site visit was at the batch plant, in order to allow participants a chance to use the portable toilets.

The site visit was scheduled for 10 a.m. to 2 p.m. but the tour was wrapped up shortly after noon.

The TMT contested case hearing will officially commence on October 11, 2016 at 10 a.m. at the Hilo Naniloa Hotel. Several pre-hearing conferences have already been held.

More video from this site visit at the tag: Mauna Kea Site Visit 2016. 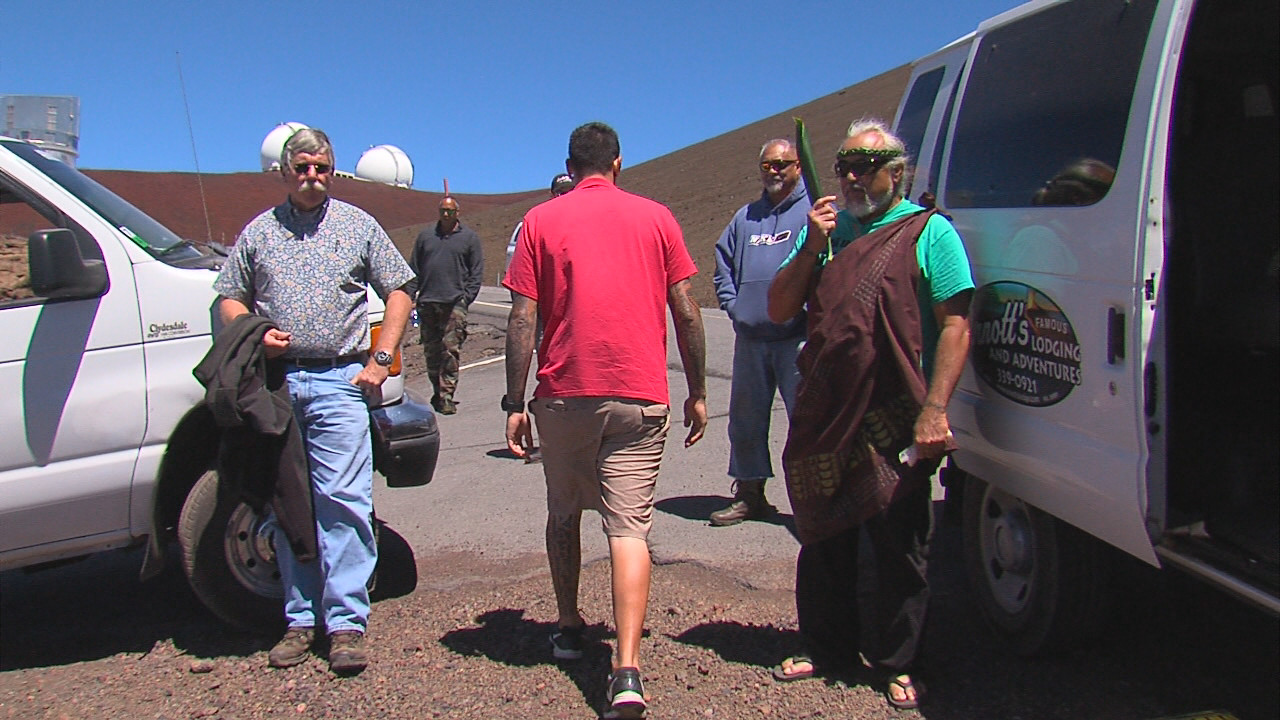 Participants get out of their cars, briefly, at the site of the planned batch plant near the summit of Mauna Kea.