On day 4 of the quasi-judicial proceeding, Kalani Flores cross-examined James Hayes, a witness called to testify by the University of Hawaii at Hilo, the applicants for the conservation district use permit that will allow for the construction of the $1.4 billion observatory. Hayes is an author of the TMT environmental impact statement that was required to be produced as a part of the permit process.

Flores is part of the original hui of petitioners challenging the legal basis for TMT project.

During his questioning, Flores honed in a different document produced years before: the Mauna Kea Science Reserve Master Plan, adopted by the University of Hawaii Board of Regents in June 2000. The document served as an update to the 1983 Mauna Kea Science Reserve Complex Development Plan, and had the stated goal of “integrating and balancing cultural, natural, educational/research and recreational values” on the mountain.

Flores began by comparing the NGLT – or Next Generation Large Telescope – envisioned in the 2000 Mauna Kea Science Reserve Master Plan to the Thirty Meter Telescope. Flores attempted to identify the NGLT as the predecessor to the TMT. From the page IX – 37 of the master plan:

A single large optical/IR telescope may be proposed for Mauna Kea in the 20-year life of this plan. A ground-based telescope with a mirror of 25 to 50 m. in diameter is being considered by the astronomy community, which would complement the planned Next Generation Space Telescope. This facility would be the largest telescope in the world, and is currently called the Next Generation Large Telescope (NGLT).

The large scale of this instrument makes the visual impact considerations very important in the facility siting and design. The NGLT would not be appropriately located at Mauna Kea’s summit ridge, due to the major earthwork requirements that would disturb Wékiu bug habitat and the visibility of a large telescope placed atop the ridge. In addition, telescope engineers have indicated that wind forces acting on the structure are expected to be severe and problematic. To minimize potential obscuration of existing observatories, the potential site for this facility must also be located in an area that is distant from the prominent topography at the summit ridge and nearby pu ‘u.

A location that would minimize its visibility and reduce wind shear forces, and minimize potential obscuration impacts, would be on the slope to the northwest of the summit ridge. The proposed location of the telescope will take advantage of a northerly extension of the summit ridge to entirely block views of the new facility from Hilo, and partially block views from Honoka‘a. Figure IX-16 shows the proposed location for the NGLT, which is located between the SMA service roadway and a jeep road that was built decades ago for preliminary testing of viewing conditions to the northwest of the summit ridge. The presence of the existing roadways will help minimize potential site disturbance for the infrastructure extension to this site.

Strict design guidelines will dictate the size and color of the NGLT. The preliminary design concept proposed for the NGLT employs a unique sliding dome mirror enclosure with a sub-grade foundation, as shown in Figure IX-21. The lower half of this observatory will be built below grade to minimize the apparent height and mass of the facility. The facility shown in the concept has a 30-m. mirror, with a dome shaped and colored to simulate a small pu ‘u to blend well with the surrounding landscape. 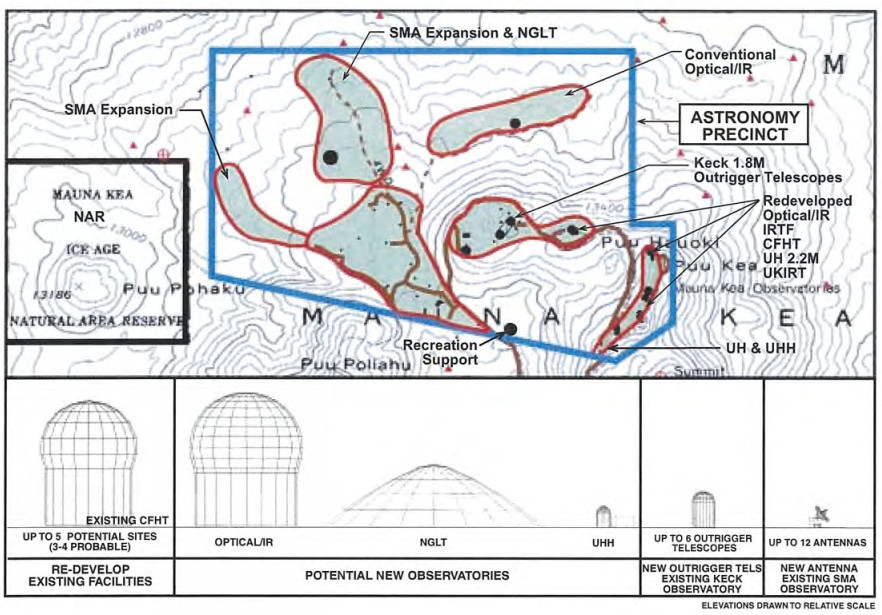 “Would the TMT be considered as the type-four Next Generation Large Telescope, NGLT, as noted in this master plan?” Flores asked.

“It would fall into that category,” Hayes answered. 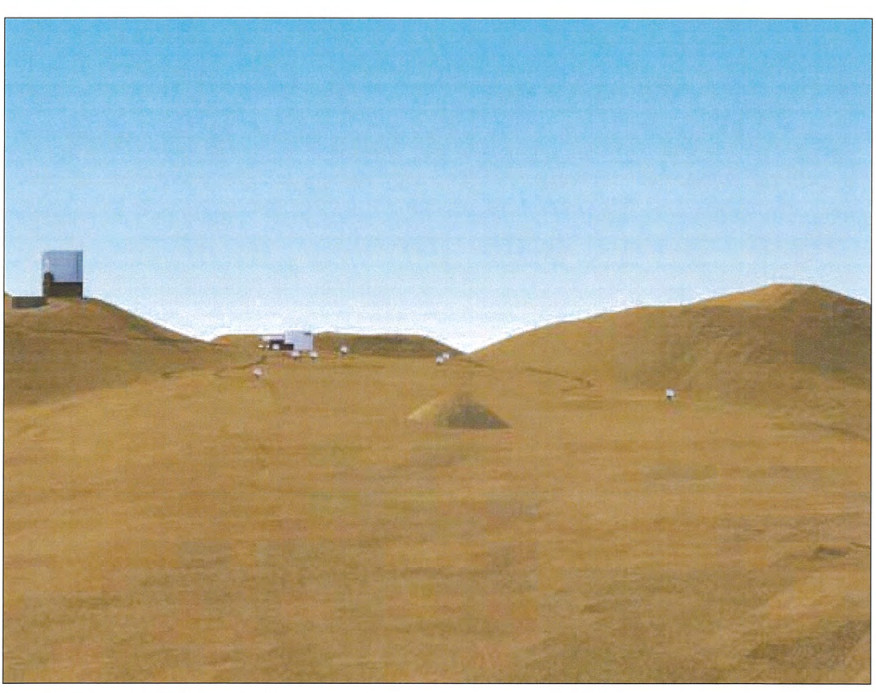 Under questioning by Flores, Hayes admitted the 2000 master plan design – exemplified in the image from the document shown above – would have “probably” reduced the visual impact of the telescope, yet was not analyzed as a reasonable alternative in the TMT EIS, for the reasons listed on page 3-156 below:

The preliminary design concept for the NGLT in the 2000 Master Plan was to employ a sliding dome mirror enclosure and a sub-grade foundation, with the lower half of the observatory below grade to minimize the apparent height and mass of the facility. However, it has been determined that placing the telescope mirror below grade would significantly limit the area of the sky that could be viewed. In addition, the subsurface location would suffer because the air near the ground is more turbulent and dusty; and this would degrade the quality of images obtained by the telescope. Furthermore, the volume of rock that would need to be excavated, on the order of 70,000 cubic yards, runs counter to new OMKM policies to reduce the movement of rock. It would also make it more difficult to decommission the observatory per new OMKM policies due to the amount of material excavated. Therefore, the TMT Observatory design places the primary mirror roughly 66 feet above the ground surface in order to minimize these adverse effects. As discussed in Section 2.5.1, TMT Observatory Design, and detailed in Section 3.5, Visual and Aesthetic Resources the TMT Observatory has been designed as to minimize the above-grade height and total width to the extent possible.

It was also suggested in the 2000 Master Plan that the half of the NGLT observatory above grade be shaped and colored to simulate a pu‘u to blend with the landscape. Because the TMT Observatory’s primary mirror will be located above ground, the shape of the above-ground enclosure could not be made to be shaped like a pu‘u unless it covered a much larger area. Such a structure would not be feasible because it would disturb the cultural and natural resources to a significantly larger extent than the proposed design. As stated, the rotating dome of the TMT Observatory will have a reflective aluminum-like coating. This color was selected because it appears to blend with the natural environment year-round better than white or mottled brown (see Section 3.5, Visual and Aesthetic Resources), and it reduces energy use relative to using a mottled brown color.

Flores moved on to one of the design recommendations for “surfaces, textures and materials” for future Mauna Kea observatories in the 2000 Mauna Kea Science Reserve Master Plan, which stated, “As much as possible, surfaces should be non-reflective in the visible spectrum to minimize glare and visibility from distant areas.”

After Hayes testified that the planned TMT project is aluminum-like and reflective in nature, Flores asked if that means the project is not compliant with the design guidelines for telescope surfaces in the 2000 master plan.

TMT officials have stated that the reflective dome will reduce visual impact, blending in by reflecting the colors of the surrounding environment. Flores suggested there are other considerations, however, during his cross-examination of Hayes.

As stated in Section 2.5.1, the finish for the TMT Observatory dome will be a reflective aluminum-like finish, similar to that of the Subaru observatory. The use of a reflective aluminum-like finish was based on the following considerations (1) visibility of the dome, (2) optimum performance of the observatory, and (3) reduced need of cooling air within the dome during the day.