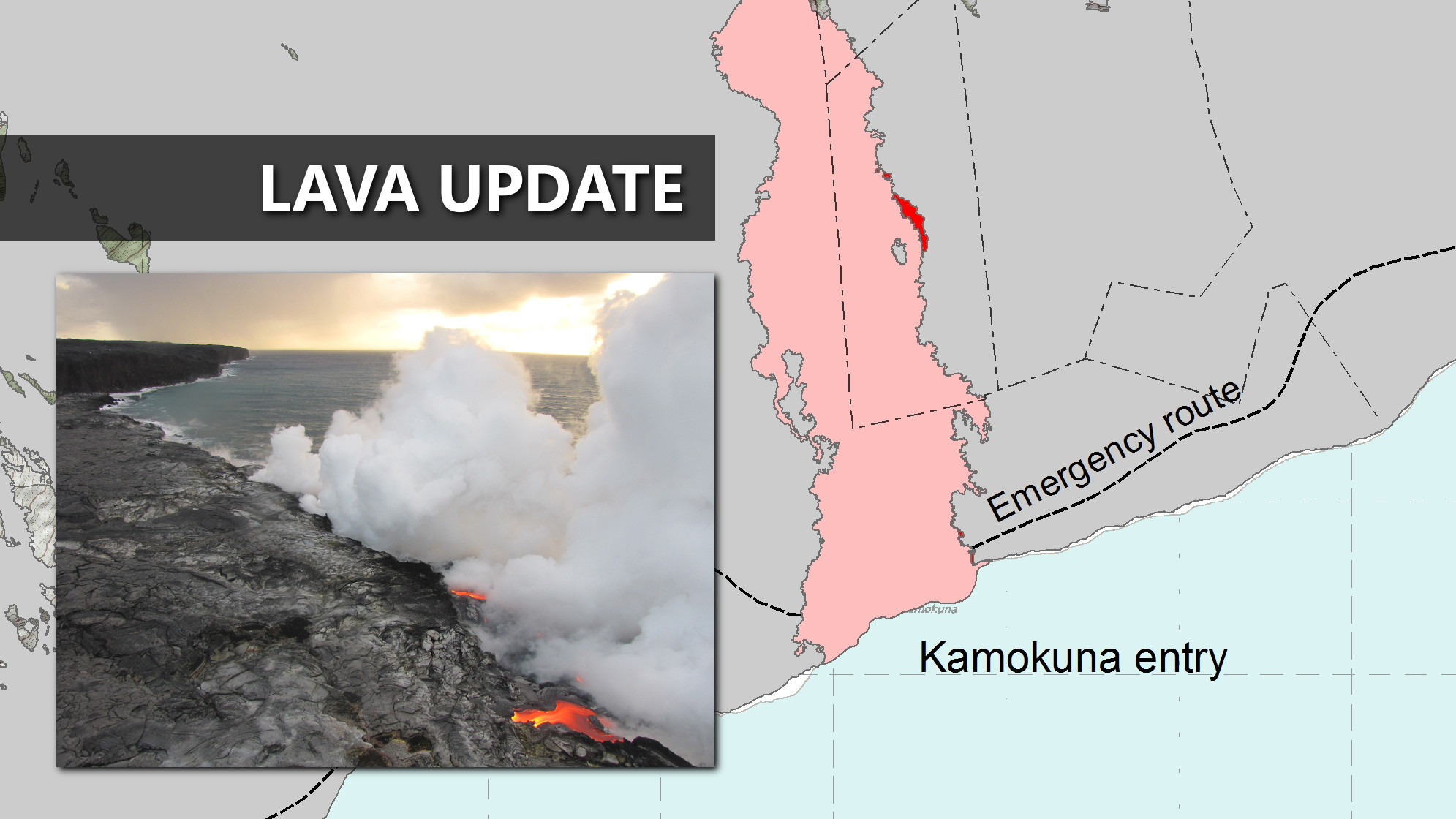 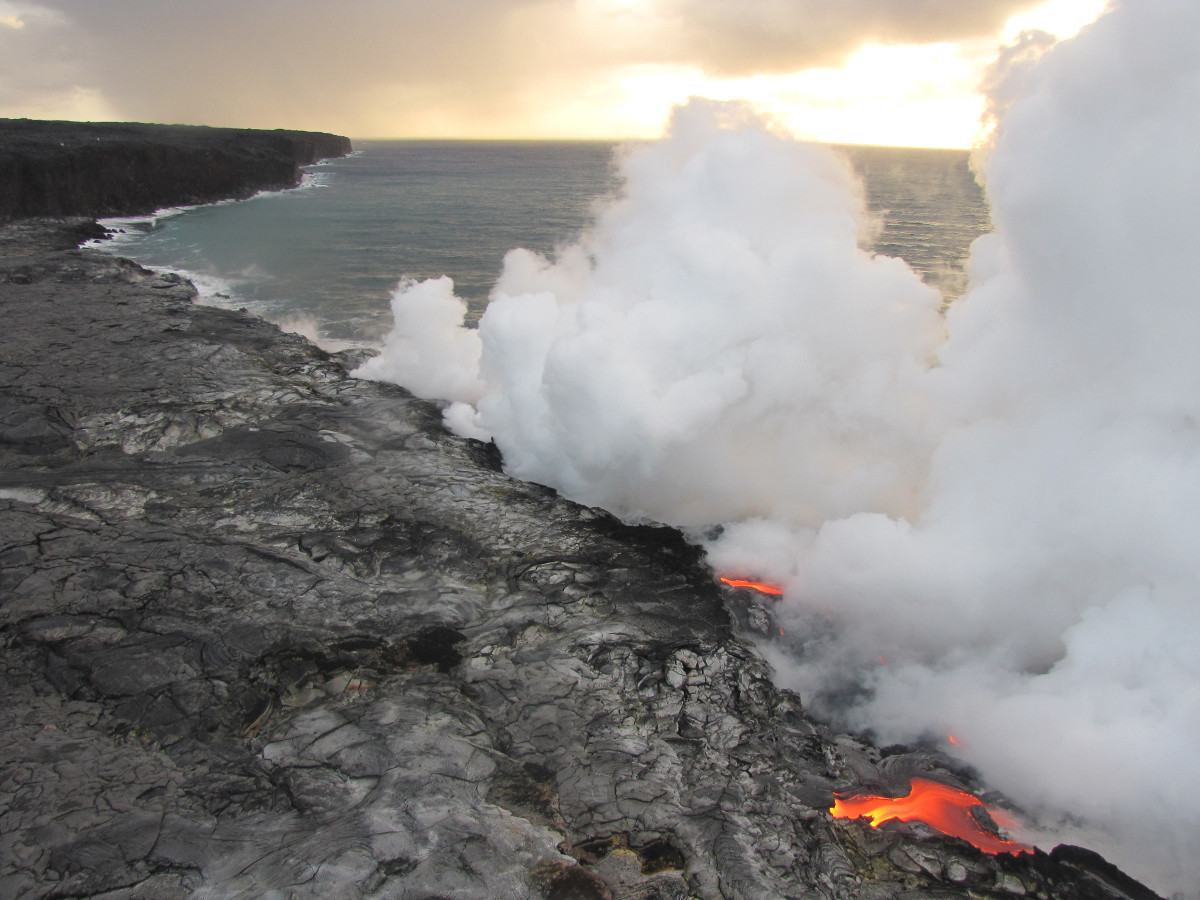 (Photo by Rick Hazlett, University of Hawaiʻi at Hilo) An aerial image of the east Kamokuna lava delta this morning shows lava entering the ocean at the front of the delta.

HAWAII VOLCANOES NATIONAL PARK – Lava continues to pour into the ocean along the cliffs of Hawaii Volcanoes National Park, and scientists have noted growing cracks near the Kamokuna lava entry that hint of a growing danger of collapse. 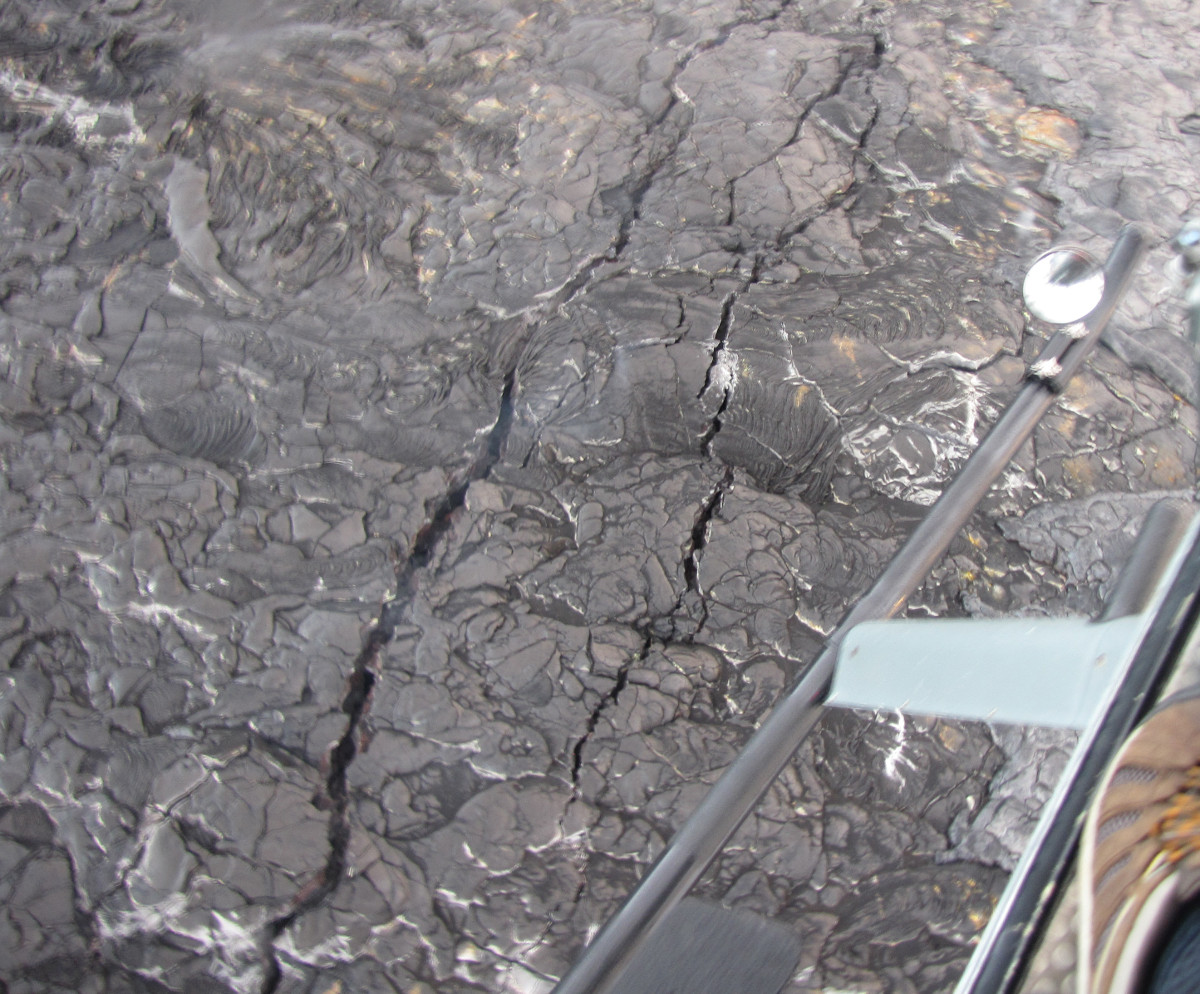 (Photo by Rick Hazlett, University of Hawaiʻi at Hilo) Looking down from the helicopter, cracks are visible on the surface of the east Kamokuna lava delta. These cracks are reminders that lava deltas are inherently unstable features that can collapse without warning. A lava delta collapse can send tons of hot rock into the sea, generating steam-driven explosions that can hurl fragments of molten lava and solid rock 100s of meters (yards) in all directions—inland and seaward. 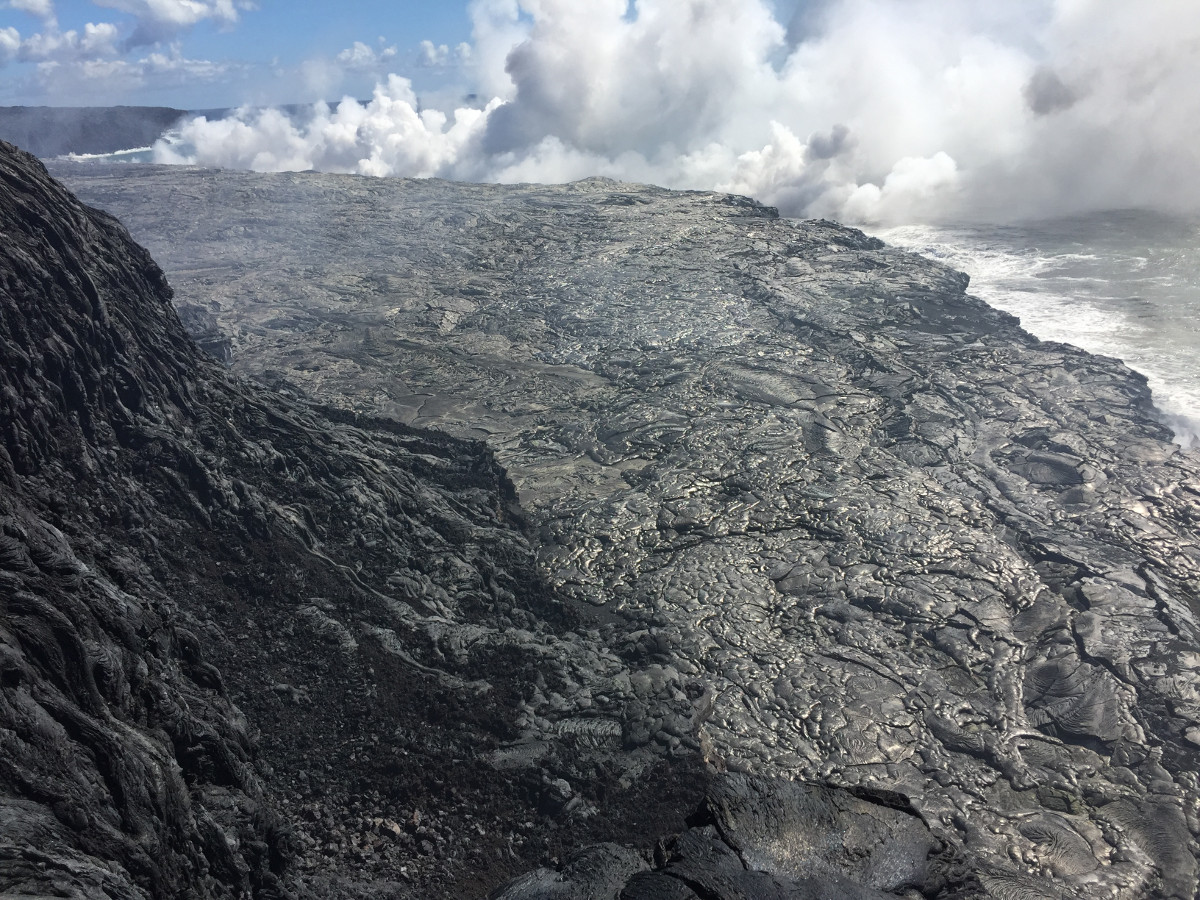 (USGS photo) The east Kamokuna ocean entry was still active on October 25, with multiple entry points spread along the eastern side of the lava delta. Lava dribbling into the sea at the front of the delta creates a billowy white plume, which looks harmless, but is actually a mixture of superheated steam, hydrochloric acid, and tiny shards of volcanic glass.

The 61g lava flow extends southeast from Puʻu ʻŌʻō on Kīlauea’s south flank. Activity is presently concentrated along the front of the east lava delta, while the west lava delta was completely inactive. 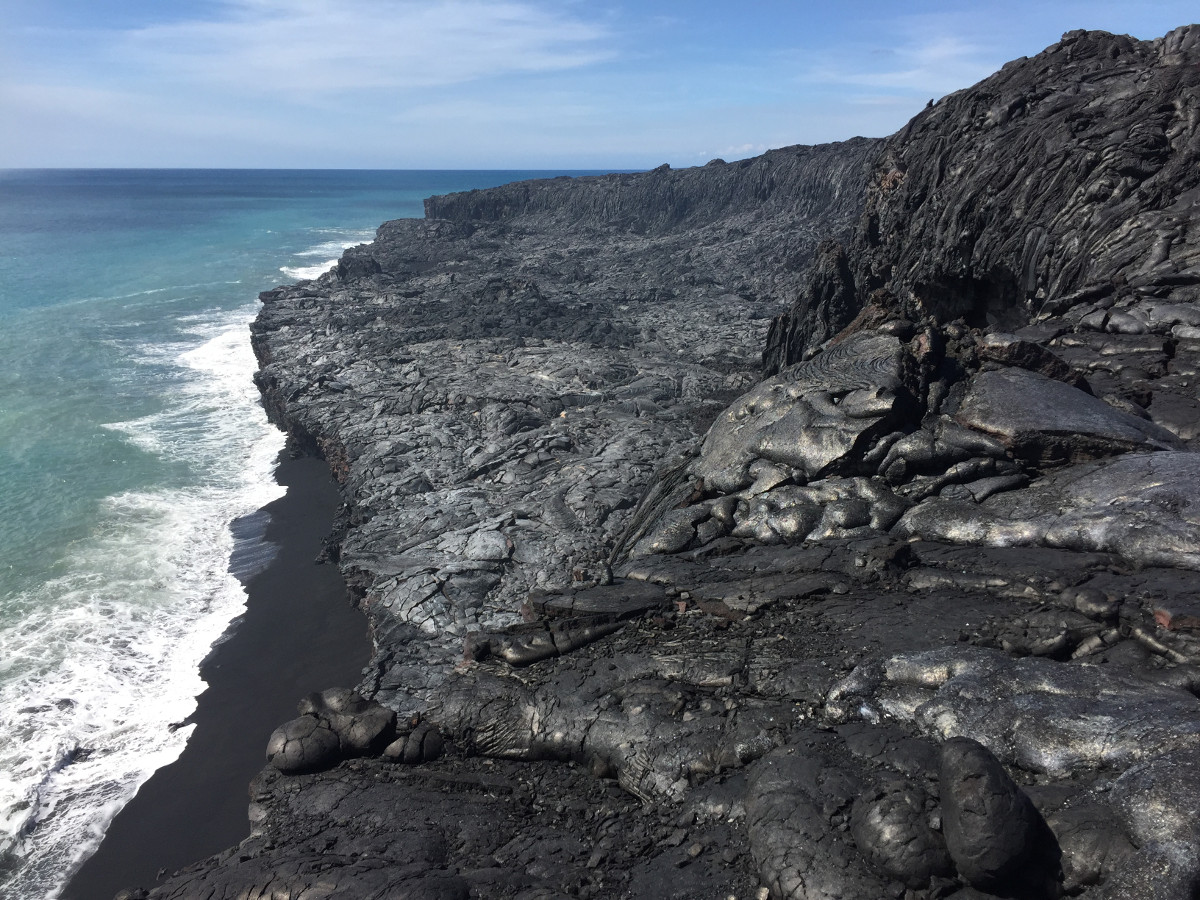 (USGS photo) The west Kamokuna lava delta was completely inactive, with no lava entering the ocean.

Today, the USGS repeated its warning to visitors visiting the ocean entry area:

As a strong caution to visitors viewing the 61g flow ocean entry (where lava meets the sea), there are additional significant hazards besides walking on uneven surfaces and around unstable, extremely steep sea cliffs. Venturing too close to an ocean entry exposes you to flying debris created by the explosive interaction between lava and water. Also, the new land created is unstable because it is built on unconsolidated lava fragments and sand. This loose material can easily be eroded away by surf, causing the new land to become unsupported and slide into the sea. In several instances, such collapses, once started, have also incorporated parts of the older sea cliff. 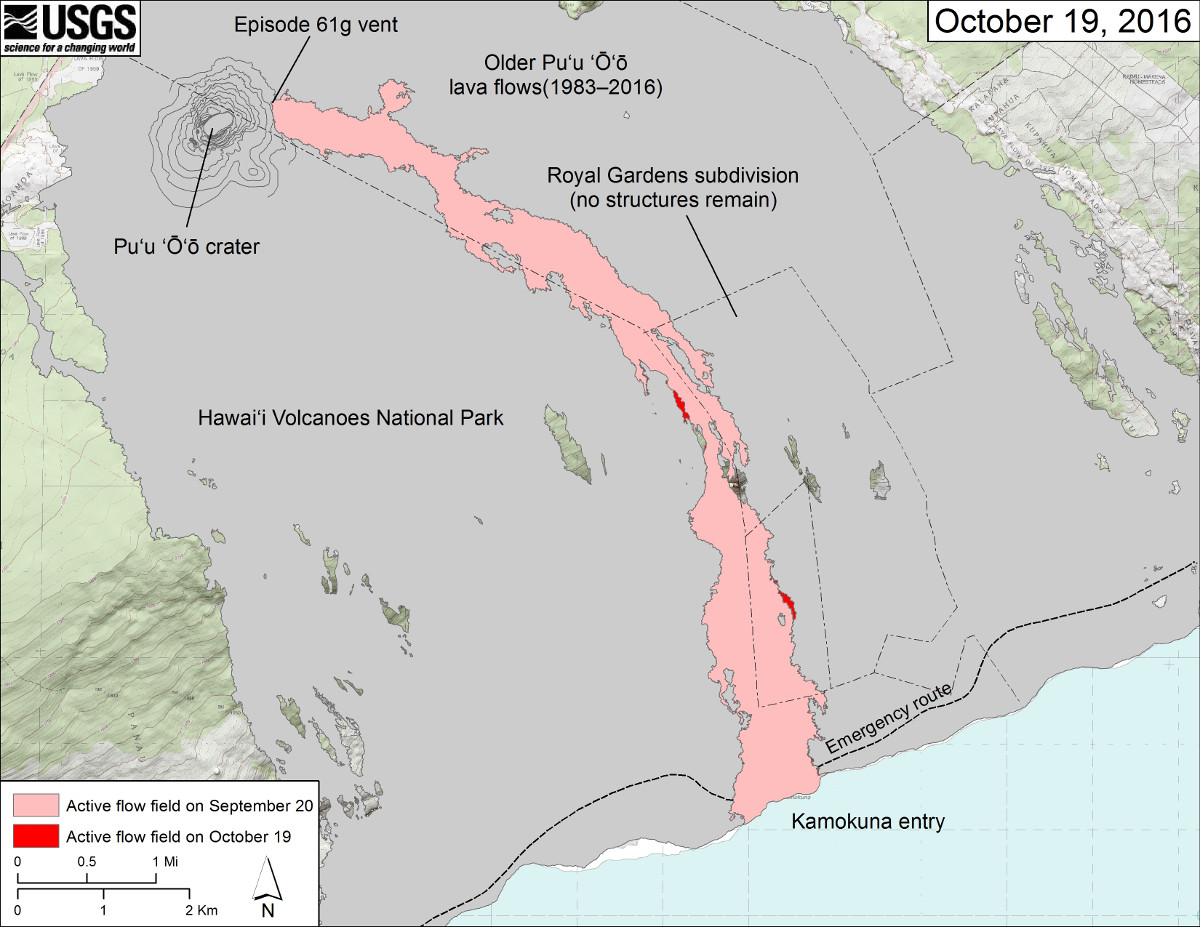