HILO (BIVN) - A plan to evaluate a toxin to control mice at PTA was presented to concerned members of Hawaii County's Game Management Advisory Commission. 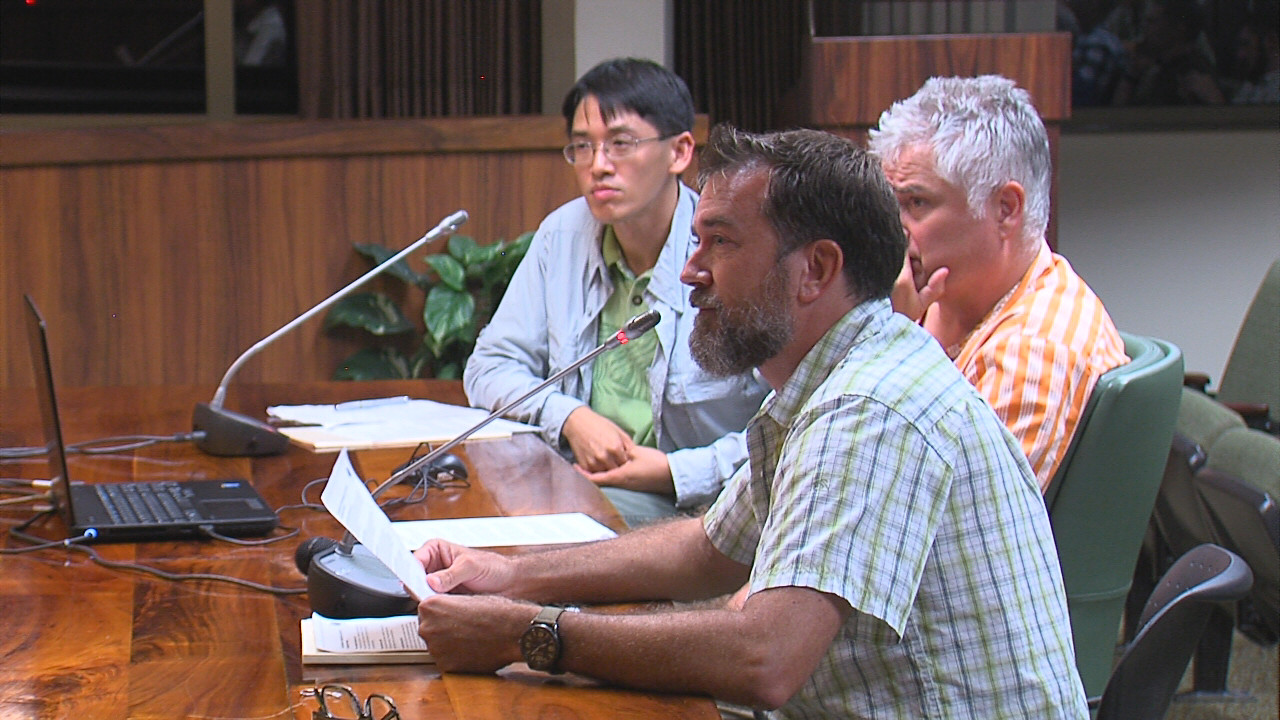 Dr. Shane Siers of the US Department of Agriculture presents to the Hawaii County Game Management Advisory Commission.

HILO, Hawaii – A plan to conduct a field evaluation of rodenticide to control mice at Pohakuloa Training Area was presented to the Hawaii County’s Game Management Advisory Commission recently.

During the GMAC meeting held in Hilo on Monday, October 24, concerned commissioners sat down with Dr. Earl Campbell of US Fish and Wildlife Service, Dr. Shane Siers of the US Department of Agriculture, and Patrick Chee of the Hawaii DLNR, Division of Forestry and Wildlife.

The commissioners – many of them hunters – were concerned that the rodenticide may impact the game mammals that they value in the area.

U.S. Fish and wildlife service was originally scheduled to meet with the commission last month but cancelled.

Dr. Siers explained the details of the rodenticide project, and provided the two-page FAQ reprinted below.

Field Evaluation of Rodenticide to Control Mice for Conservation Purposes

Who is conducting the evaluation and why?
The evaluation is being conducted by the US. Department of Agriculture’s National Wildlife Research Center and is funded by the Department of the Interior’s U.S. Fish and Wildlife Service. The plan is to evaluate the effectiveness of two commonly used rodenticides to reduce invasive mice populations.

Why are invasive mice a problem?
Invasive mice have been documented feeding on nesting birds, chicks and eggs, insects, and native plant seeds and seedlings. This feeding behavior negatively impacts conservation efforts to protect and recover native animals and plants.

Why are rodenticides being studied?
Other management tools, like traps, have not been shown to be effective and are too expensive to use over large areas. Existing rodenticides have been approved for use in agricultural and urban situations, and may be effective for controlling mice for conservation purposes. Use of selected rodenticides to control mice for species conservation is dependent on proven effectiveness in the field. This study is intended to provide this information.

Where will this study occur and why was this area chosen?
The trials will occur in small test plots within fenced conservation areas in the Department of Defense’s Pohakuloa Training Area, Hawaii. This area was chosen because it has high mouse populations and its habitat is similar to other conservation areas with mouse problems, is remote and located on federal land that is fenced and closed to public access and hunting, has very low usage by threatened and endangered species, and is considered to be pig and sheep free.

How will rodenticides be used and monitored?
Six small study plots (5.6 acres each, or roughly the size of four football fields each) within the study area will receive a measured application of rodenticide pellets, carefully applied by hand. If most of the pellets are taken by mice within seven to ten days, a second application may occur. Two commonly used commercial rodenticides (chlorophacinone and diphacinone) will be tested. Researchers will tag mice before rodenticide treatment and track them to monitor survival at each plot. Trail cameras will be used to record whether other animals take pellets.

How much rodenticide is being used?
The rodenticides will be applied using manufacturer and regulatory guidelines under the authority of a US. Environmental Protection Agency Experimental Use Permit. Initially, two diphacinone bait pellets (1/2” diameter) or seven smaller chlorophacinone pellets (3/16” diameter) will be applied per square yard in each of the study plots. Application rates could rise or fall slightly in later phases of this study, depending on the results from the earlier stages.

How long do the rodenticides last?
Once pellets are applied they will begin to be removed by rodents and Will start to break down. In wet environments pellets can disappear in as little as a week. The pellets will probably last longer in the colder and dryer environment of the study area. The results of this study will help inform managers how long the pellets last under different environmental conditions.

When will the study occur?
The study is scheduled to begin in early February 2017 and conclude by the end of September 2017.

What are the risks to game animals and wildlife?
These products are used as rodenticides because rodents are more sensitive to them than most other animals. Toxicity is based on the type of animal exposed, body size, and the amount eaten over time. Rodents must feed on these products for several days to be affected. Natural resources personnel are confident that there are no pigs or sheep in the fenced areas. Game birds may be exposed by feeding on rodenticide pellets. Previous research has determined that there is low risk of game birds dying from feeding on diphacinone pellets. Chlorophacinone is more toxic to birds, and some deaths could potentially occur. Given the small area, it is not expected that the number of deaths would noticeably change game bird abundance. Nene are not known to feed in this area, but could be exposed to similar risk.

What are the risks to humans from eating exposed game?
Both of these products have low toxicity to humans and one was historically used in human medicine. There are no known cases of human health effects from consuming game animals exposed to these rodenticides. Since we expect only a small number of birds to be exposed, the chances of one of them being shot by a hunter are low, especially since all the plots are far from public access. Additionally, concentrations of these chemicals decrease rapidly within the body of animals surviving exposure. Any remaining toxins found in animals having eaten these products is far lower than can be expected to cause negative health effects.

What are we doing to reduce public risk?
The choice of location, the timing of the project (particularly planning work outside most of the game bird season), and the close adherence to EPA permit restrictions are intended to reduce risks to human health and the environment. Our analyses indicate low risk of harmful human exposure under any proposed use of these products for conservation.