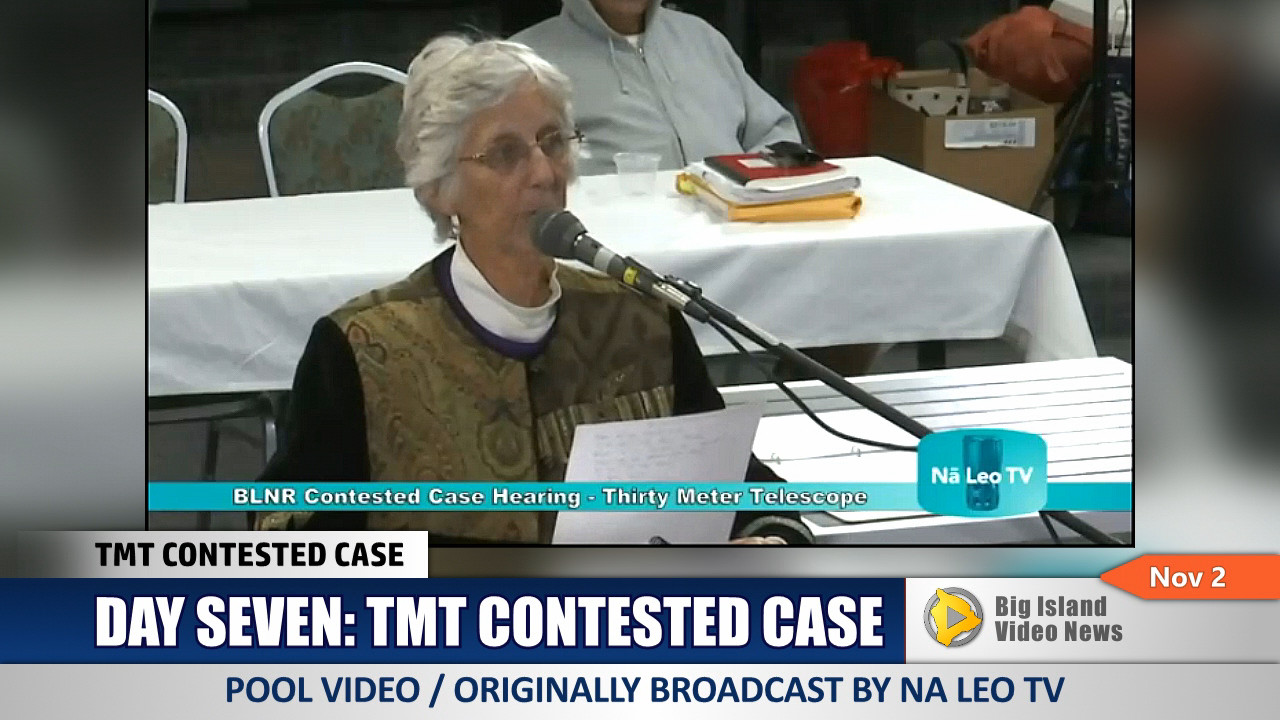 HILO, Hawaii – Robert McLaren, the Associate Director for the University of Hawaii’s Institute for Astronomy, was cross-examined by opponents of the Thirty Meter Telesope project following his testimony on November 2.

McLaren, a witness called on behalf of the University of Hawaii, focused on the plans in place to govern the removal of observatories from Mauna Kea, called decommissioning, which is to be carried out when the facilities reach the end of their useful life, or when the lease runs out.

In the video above, original petitioners Kalani Flores and Deborah Ward questioned McLaren on the details of the decommissioning.

MCLAREN: “Well that would be a version of recycling. But yes.”

FLORES: “Based upon these statements, would still be possible to build an observatory larger than the footprint of the existing or recycled site?”

MCLAREN: “Could you be a bit more specific?”

WARD: “Are their financial consequences? Is anybody expected to pay for the loss of viewing time?”

MCLAREN: “Well, that’s that’s a hypothetical question that I don’t think that situation would arise.”

MCLAREN: “Let me be clear: we’re not contemplating any decom… any sort of non-voluntary decommissioning where a facility has a sublease.”

MCLAREN: “So that – that doesn’t figure in the picture at all. And I think that’s the situation that you’re asking about.”

WARD: “Is the decommissioning of the UKIRT voluntary?”

MCLAREN: “UKIRT. The UKIRT is owned now by the University of Hawaii, so it’s our decision.”

MCLAREN: “It hasn’t been approved. There’s no notice of intent UKIRT was simply identified in the current projection as what – well, as identified two ways. One, it’s one in the decommissioning plan where our projection is that it’s not something that we would try to continue after 2033. More recently, in – in response to the governor’s request, the university has said that they would… that they were prepared to decommission UKIRT on the TMT timescale in order to meet that request. But since the university owns U- the facility – we are free to do that on our own decision.”

WARD: “So let me ask again: who – what entity would be financially responsible for decommissioning the UKIRT now that the university owns it?”

WARD: “I see. And where would they derive those funds?”

MCLAREN: “In as… in connection with our agreement with the United Kingdom to terminate their sublease and for the university to acquire ownership we received funds that were set aside specifically for the purpose of the eventual decommissioning.”