HILO (BIVN) - Starting with 13 telesopes, Robert McLaren says "one would be added, TMT. And 4 would be removed." Leaving 10. But it gets a little more complicated. 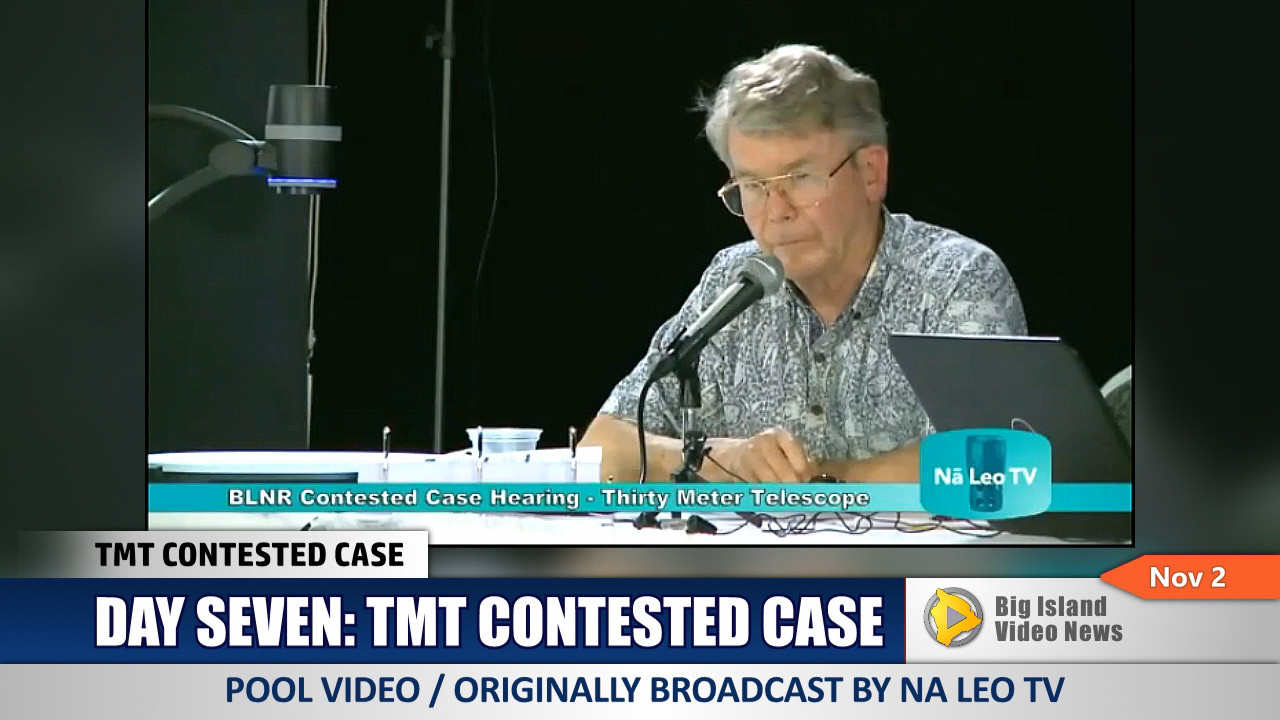 HILO, Hawaii – The ongoing Thirty Meter Telescope contested case hearing ended the day Wednesday with testimony from University of Hawaii witness Robert McLaren, who spoke about the observatory decommissioning process to be undertaken on Mauna Kea.

“At the time that decommissioning plan was adopted there were 13 telescopes operating on Mauna Kea,” McLaren told the participants inside the Crown Room of Hilo’s Grand Naniloa Hotel, where the hearing is being held.

According to McLaren’s curriculum vitae, he has been primarily involved with the
development of astronomy facilities on Mauna Kea since his arrival at the Institute for Astronomy in 1990. “For the first six years,” he wrote, “I spent most of my time on the agreements and permitting for the VLBA Antenna, Subaru, Keck II, Gemini, and the Submillimeter Array. During my term as Interim Director, I worked on the University’s Master Plan for Mauna Kea (adopted in 2000), and on the development of the Institute’s base facility in Hilo. More recently, in my position as Associate Director, I have assisted with the Pan-STARRS project on Haleakala and with the approval process for the Daniel K. Inouye Telescope on Haleakala and the Thirty Meter Telescope on Mauna Kea. I handle a number of day-to-day responsibilities in the Director’s Office and have administrative responsibility for Mauna Kea Observatories Support Services.”

McLaren detailed the current plans for decommissioning – or removing – certain observatories on Mauna Kea. Here is a partial transcript of his testimony:

The decommissioning plan projected that 10 facilities would continue beyond 2033 on the assumption that the (Mauna Kea master lease) would be extended. Conversely, 4 would be decommissioned and removed by 2033. Those 4 being Caltech Submillimeter Observatory – which I’ve already mentioned, the Very Long Baseline Array antenna, UKIRT, and one or the other of James Clark Maxwell Telescope and the Submillimeter Array.

Starting with 13, one would be added, TMT. And 4 would be removed; the ones I just mentioned. Leaving 10.

None of the 4 to be removed was selected because it would be obsolete. All could remain productive given adequate sponsor support. Rather, they were selected either because of sponsor policy decisions, such as in the case of CSO. Or on the basis of a balancing judgment by the university between – on the one hand, the future scientific potential of the facility and its site – and on the other hand, the goal of limiting overall physical presence on the mountain.

UH responded to two directives from Governor Ige which bear on this topic. The first was that the Thirty Meter Telescope site is the last new area that will be used for a telescope project. Any other future development would be at an existing site. This commitment was reaffirmed in a November 2015 letter from UH president Lassner to DLNR chair – or BLNR chair – Suzanne Case. And I believe that’s exhibit A-39, that letter.

The other directive – or the response to a directive – was that UH committed to decommissioning three telescopes by the time Thirty Meter Telescope is operational. One of these is CSO of which I just said that the decommissioning process has already started. Another is UKIRT and the university has proposed that the third would be Hokuke’a. This completes my summary.”