KONA (BIVN) - Testifiers were told at prior hearings that the controversial Kukuihaele Park project was not on the agenda. This time, the speakers were granted the latitude to talk. 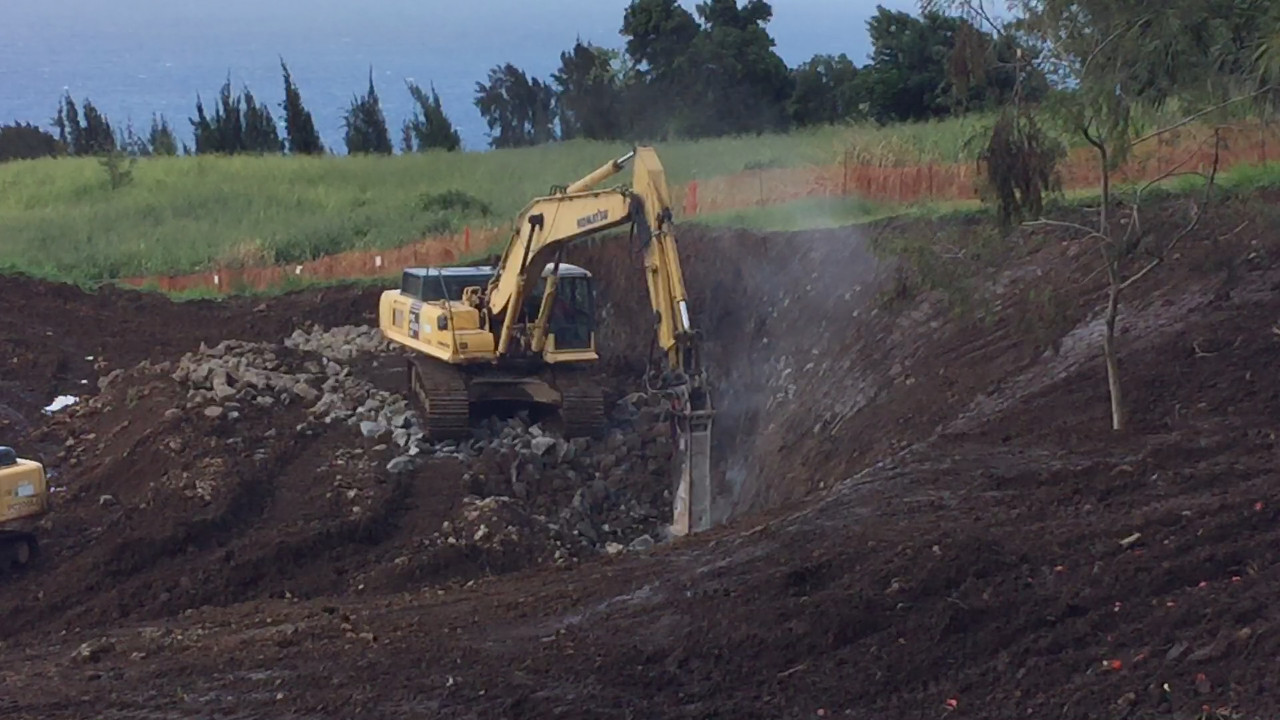 Construction crews drill into the rock at Kukuihaele Park. Image from video taken by resident Koohan Paik, who is opposed to the county’s plan to build a baseball field at this location.

KEALAKEHE, Hawaii – A group of Kukuihaele residents against a new ballpark being built in their neighborhood again took their case to the Hawaii County Council.

The group spoke out during the public testimony portion of the council’s Finance Committee meeting on November 15 in Kona. It’s the third time they have gone to the committee to sound off.

“These here are comments from community members begging you to restore Kukuihaele Park,” said Mary Gray, unfurling a long petition list. “People who know Kukuihaele cannot sustain the impact of a ballpark. People who know that $5 million dollars is a lot of money.”

Prior to the ballfield project, Kukuihaele Park was a green, open space. It was a popular gathering area for birthday parties and family get-togethers. A baseball field, opponents say, is too much for their small village, its one lane road, and its quiet neighborhood. They also claim county government is ignoring their plea to halt the project.

Once construction crews began to dig up the park to make way for the new ballfield, protests grew louder. Opponents even purchased a full page advertisement in the Hamakua Times to amplify their grievance. The ad featured testimonials from numerous area residents of diverse backgrounds, all decrying the loss of the old park and criticizing the ballfield plan.

“Residents of Kukuihaele, new and old, have been speaking loud and clear,” said Lori Johnson, lifting a copy of the newspaper. “Here’s part of it. (They’re) finally speaking… Because we care and we want to be able someday to trust our county government.”

Making matters worse, opponents say, is the escalation of the project cost to $5 million, double the $2.5 million initially appropriated.

“I was shocked to find out about the $20 million dollars in overages between what’s estimated on project cost in one department and what contracts are actually signed,” said Jeanne Teleia, who spoke via videoconference from Waimea. Teleia held in her hands a document that she said details expenses related to recent parks and recreation projects around the island. “This goes way beyond Kukuihaele Park, although it’s one of the biggest percentages over the budgeted cost on this list.”

“We were told point blank if the bids came in over budget the plan would be reworked,” Telei added. “And remarkably, a contract for double the amount was signed with no oversight.”

“It’s just not acceptable,” testified resident Colleen Lawrence, “in something the size of little Kukuihaele Village, where it used to be so quiet.”

Lawrence says she suffers a disability from a concussion. When she wakes up every day at 6:30 a.m. she hears “those trucks start coming and … pounding on that rock that they think they have to do for 12 hours. I get that ringing in my ears all the way up till night. I can’t take the nap that’s necessary for my mind to balance and be able to focus in the afternoon, because I live downwind from this noise.”

The testifiers were told at prior committee hearings that Kukuihaele was not on the agenda and were asked to limit there comments to matters before the council. This time, the speakers were granted the latitude to talk.

Hilo councilman Aaron Chung sympathized. “I never expected this item to morph into something relating to Kukuihaele,” Chung said, “but really when I listen to all of these speakers, it really is tied in. I couldn’t agree with the speaker’s more, because we shouldn’t feel helpless at any point when it comes to how our government is operating.”

The Kukuihaele Neighborhood Association has attempted to halt the project in the courts, where a lawsuit has been filed challenging the county’s park plan. Judge Greg Nakamura denied the request for an injunction.

“We’re only policymakers,” Chung said, “and the administration carries things out. But we should never be put up in a position where we feel helpless.”