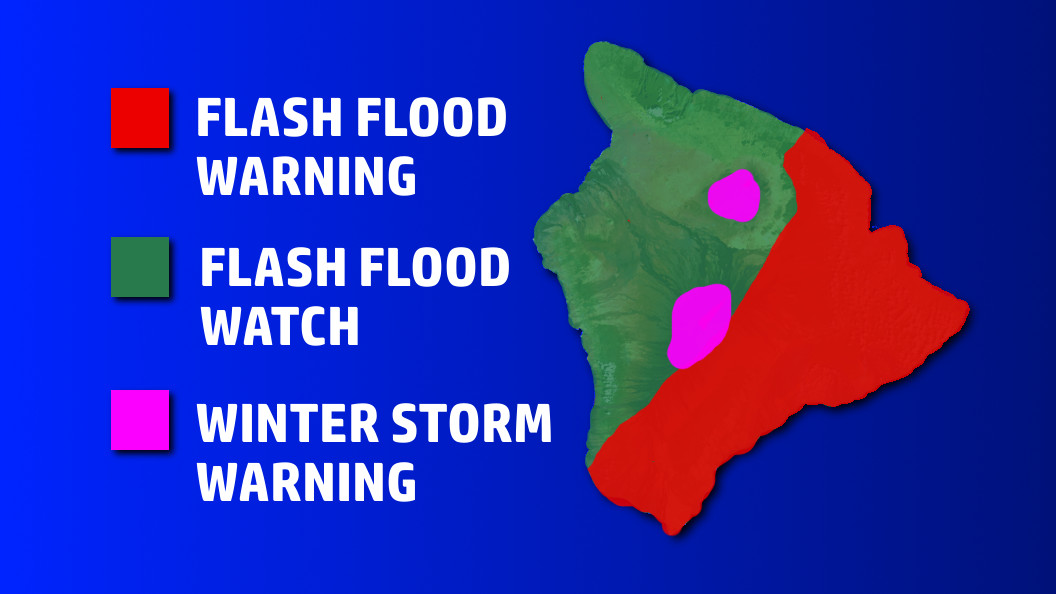 HAWAII ISLAND (BIVN) - Heavy rain is falling at a rate of 3 to 4 inches per hour. Flash flooding is expected to begin shortly, and emergency officials warn: move to higher ground now.


HAWAII ISLAND – A Flash Flood Warning has been issued for much of East Hawaii.

The National Weather Service in Honolulu says the warning is in effect until 11:15 a.m. HST.

UPDATE – The flash flood warning has been extended until 2:15 p.m.

“At 8:07 a.m. HST, rain gage reports indicated heavy rain falling across North and South Hilo districts and Puna and Ka’u districts,” forecasters said in the alert message. “Rain was falling at a rate of 3 to 4 inches per hour. Flash flooding is expected to begin shortly.”

Motorists were already told to expect traffic delays on Highway 19 along the Hamakua Coast this morning, at Maulua Gulch (Mile Marker 21 and 22) and at Laupahoehoe Gulch (Mile Marker 27 and 28) were reports of flooding and debris on the roadway were blocking the Hilo bound lane.

UPDATE (11 a.m.) – Flooding has also been occurring in Naalehu and Waiohinu, the National Weather Service reports. A rain gage in Pahala has been reporting rain rates up to 2 inches per hour.

UPDATE (9:30 a.m.) – Hawaii Police Department reports multiple landslides and intermittent lane closures between the 14 MM and the 27 MM of Highway 19 along the Hamakua coast.

A flash flood warning means that flooding is imminent or occurring in streams, roads, and low lying areas. “Move to higher ground now,” forecasters warn. “Do not cross fast flowing water in your vehicle, or on foot. Turn around, don’t drown.”

A Flash Flood Watch is in effect for the rest of Hawaii Island, while a Winter Storm Warning remains for Big Island summits.