KAILUA-KONA (BIVN) - Officials held a press conference to Thursday on Oahu to talk about the inaugural flight from Tokyo to Kona, scheduled to arrive at the Kona International Airport on Dec. 21, 2016.

KAILUA-KONA, Hawaii – International flights to Kona are scheduled to make a long awaited return at the end of the month.

Regularly scheduled international flights to Kona began in 1996 and were discontinued in October 2010.

“The resumption of international flights to Kona will have a wide-ranging positive impact on Hawai‘i Island and the state as a whole by boosting tourism spending, creating jobs and generating millions of dollars for our economy,” said Gov. David Y. Ige. “I especially thank our partners at U.S. Customs and Border Protection for working with us to achieve this goal. This was a top priority for my administration and I am pleased that we were able to make the Federal Inspection Service facility in Kona a reality.”

Officials enumerated the benefits of the new FIS:

The Hawai‘i Department of Transportation estimates new international flights to Kona will result in more than $7 million in annual projected tax benefits. International visitors will also spend tens of millions of dollars at local businesses and attractions, further boosting the economy and generating jobs. Hawai‘i has seen the numbers of international travelers increase by more than one million passengers, or nearly 60 percent, since the economic downturn in 2009. The trend in international passenger arrivals in Hawai‘i is expected to continue to grow, enhancing the need for a second airport to accept flights from international destinations.

The secondary international point of entry in Kona will ease congestion at the Honolulu International Airport, especially during daily peak hours and busy travel seasons. The FIS will improve health and safety by increasing resiliency in an emergency. Should an unforeseen incident occur in Honolulu, international flights would still be able to land safely in Kona. Currently, Honolulu is the only landing option in the state for international flights. 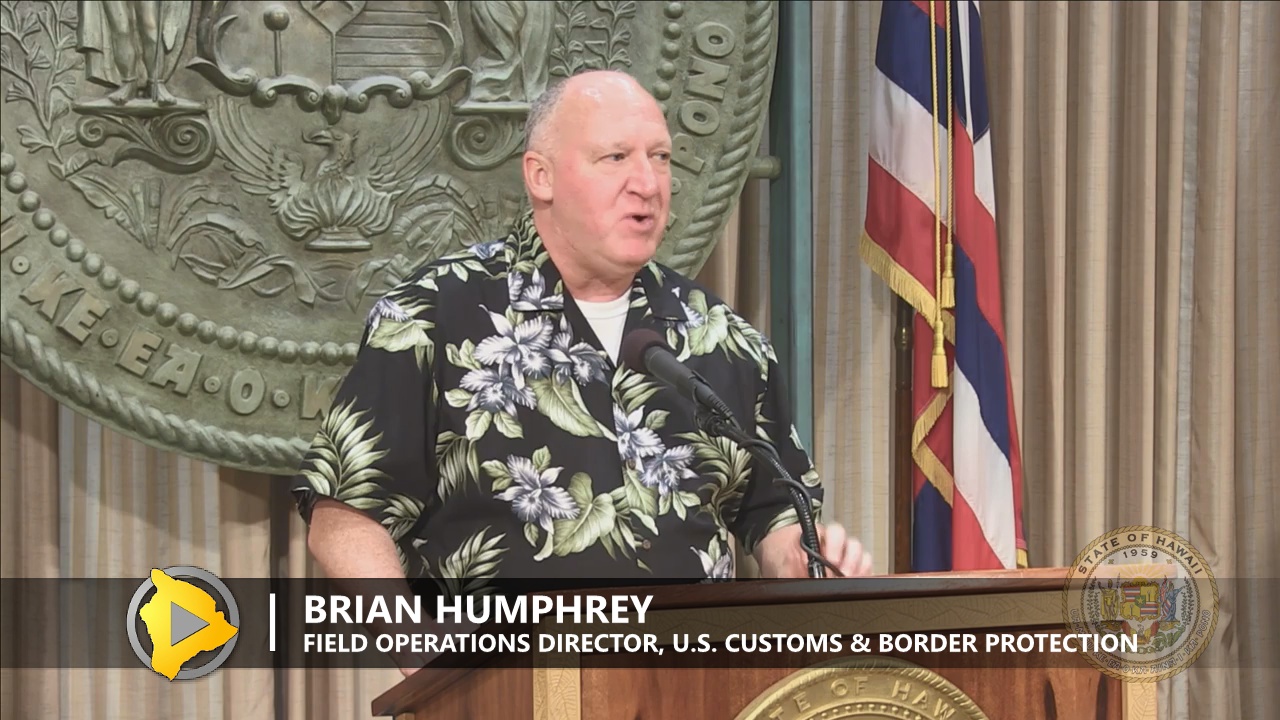 Brian Humphrey, the Director of Field Operations for U.S. Customs and Border Protection.

On hand for the press conference was Brian Humphrey, the Director of Field Operations for U.S. Customs and Border Protection.

“In fulfilling our important role protecting the border and fostering lawful travel, CBP relies on strong partnerships with stakeholders. This is why we are especially grateful for the commitment of Governor Ige and the people of Hawai‘i to providing adequate airport inspection facilities,” said Brian Humphrey, U.S. Customs and Border Protection, director, field operations. “In equal good faith, CBP is committed to providing a welcoming experience to passengers in Kona while we simultaneously protect America.”

“We look forward to welcoming our Tokyo guests with our authentic Hawaiian hospitality as they enjoy the convenience of our direct flights to the spectacular Kona coast,” said Peter Ingram, executive vice president and chief commercial officer for Hawaiian Airlines. “We are pleased to return international flights to the Big Island and thankful to all of our government, business and community partners for their support of our newest route.”