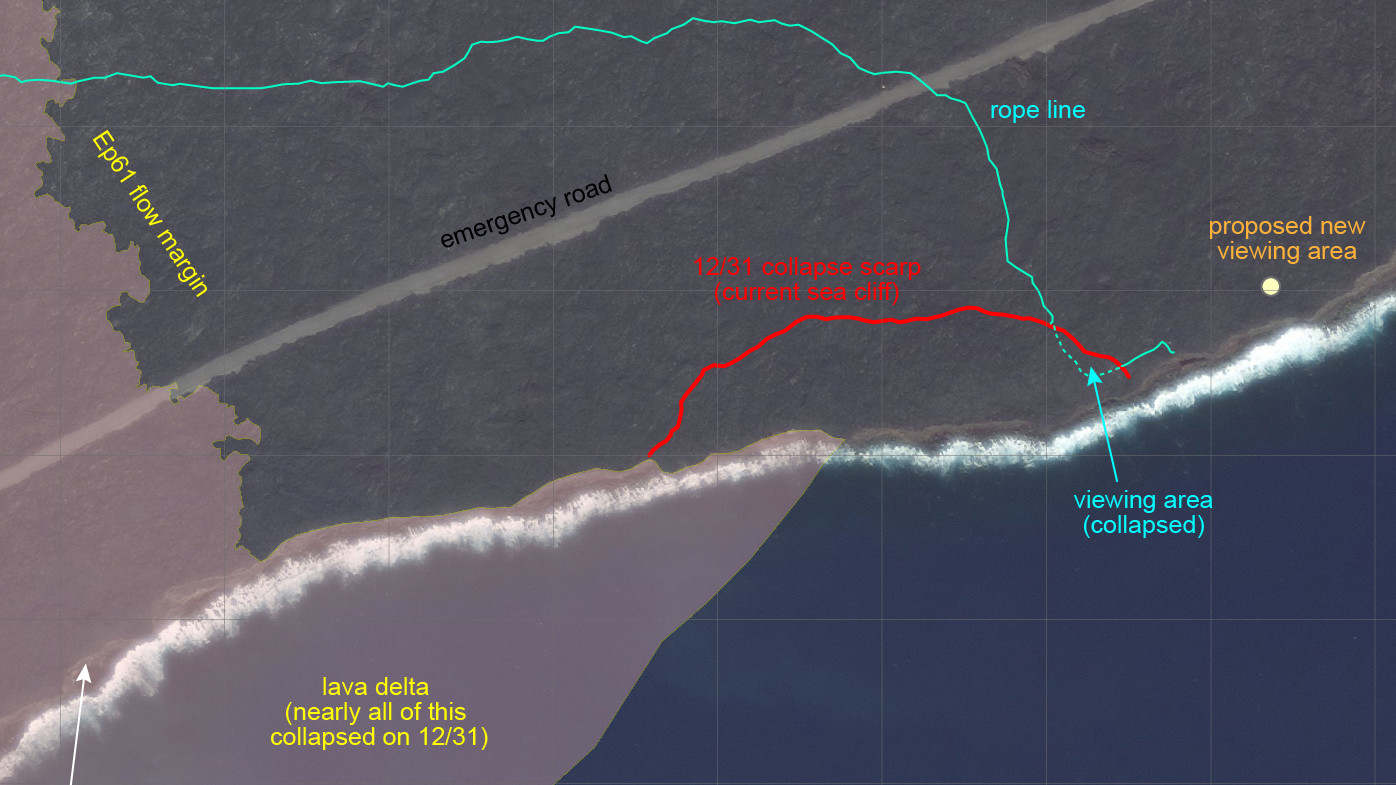 HAWAII VOLCANOES NATIONAL PARK (BIVN) - nearly all of the 26-acre lava delta is now gone, along with more than four acres of older coastal cliff area, which included the former lava viewing site. A new site is now open to the public. 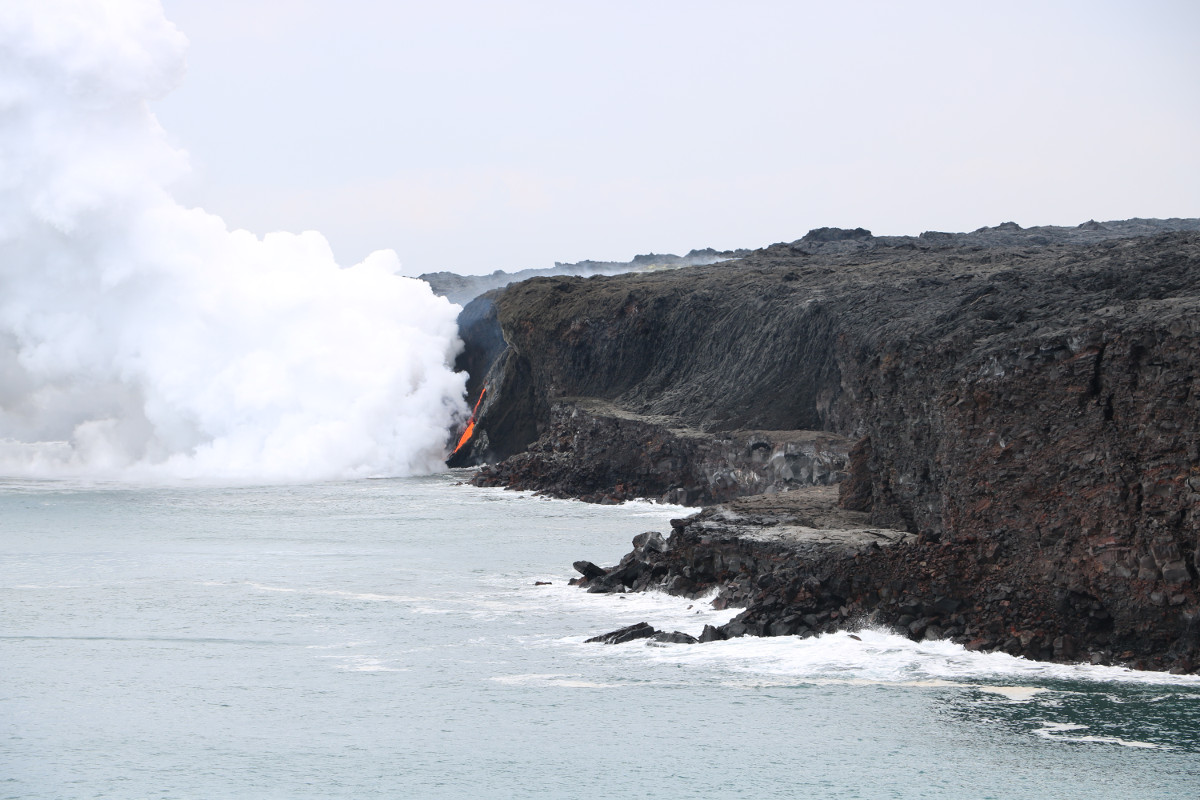 (USGS photo) The rocky shelf at the base of the sea cliff is all that remains of the Kamokuna lava delta following the New Year’s Eve collapse (Dec. 31, 2016), which sent acres of rock plunging into the sea. The exposed lava tube continued to feed a cascade of molten rock down the steep sea cliff, beginning the process of building another lava delta at the ocean entry, as this photo was taken on Jan. 1, 2017. 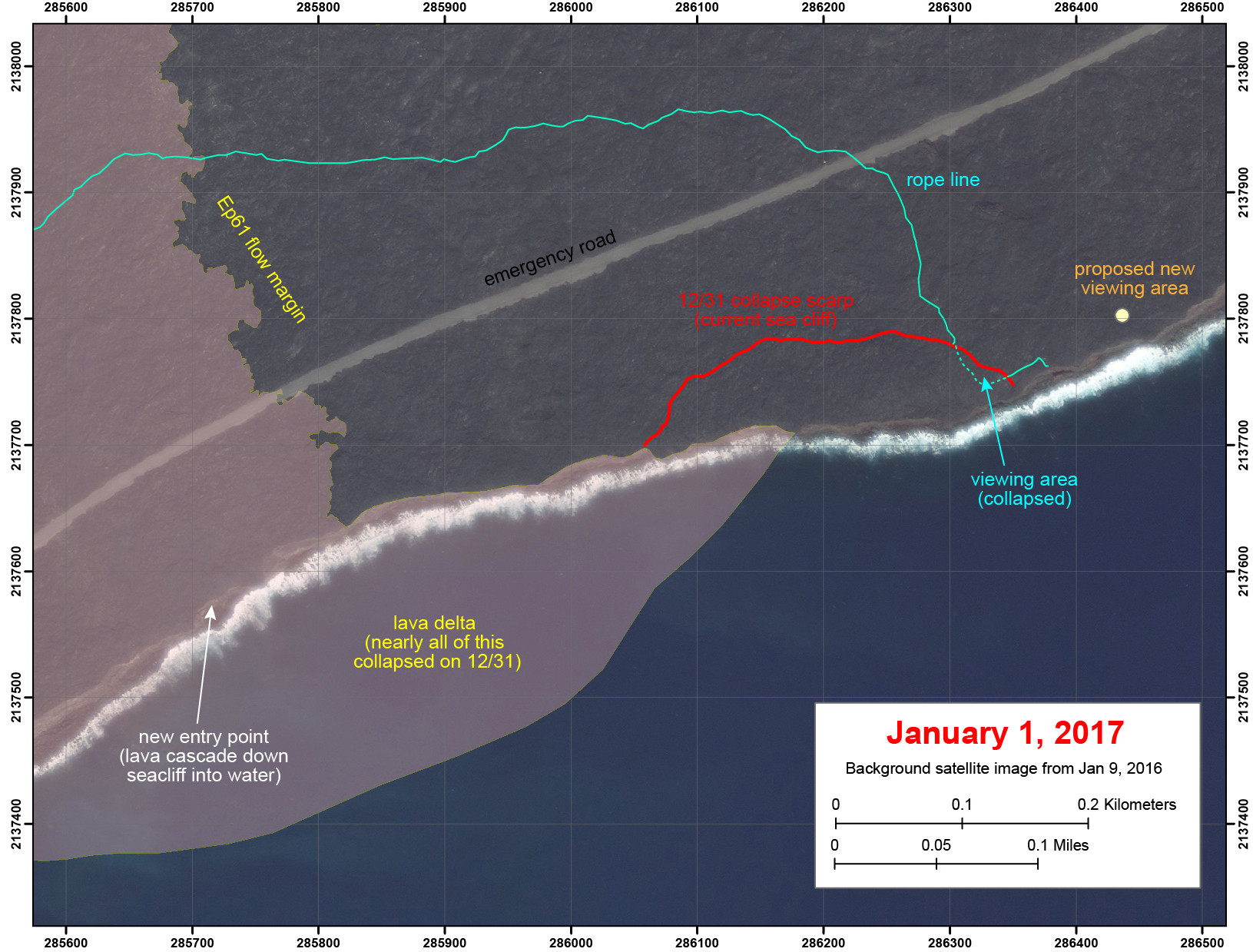 Full USGS map. Scientists say “these mapped lines, based on handheld GPS points captured on January 1, 2017, are preliminary and subject to change.” HVO geologists are in the field again today, USGS says.

“Nearly all the Kamokuna lava delta collapsed into the sea, along with a large section of the older sea cliff east of the delta,” scientists write about the new map. “The red line denotes the current (post-collapse) sea cliff; the land seaward of this line collapsed into the ocean. The blue line refers to the rope line that marks the boundary of the area closed by the National Park Service; a section of this rope line was taken out by the collapse on Saturday.”

“HVO scientists estimate that nearly all of the 26-acre lava delta is now gone, along with more than four acres of older coastal cliff area, which included the former lava viewing site,” the National Park Service reports. “The collapse on New Year’s Eve started in the afternoon and lasted several hours, creating blasts of volcanic rock and a series of damaging waves, in addition to a thick, dark plume of debris and gas.”

USGS scientists say that when the lava delta collapsed, “solid and molten fragments of lava and superheated steam exploded skyward, creating tremendous hazard for anyone who ignored the warning signs and entered the closed area on land or ventured too close to the lava delta by boat.”

“Visitors who do not heed warnings not only endanger themselves but the lives of others, including our park rangers, who work tirelessly to ensure a safe visitor experience,” said Park Superintendent Cindy Orlando.

The lava viewing area within the Hawaii Volcanoes National Park was closed for two days following the incident and was reopened today.

Visitors to the new viewing area will still have a long hike ahead of them.

“It is closer from the east entrance to reach the new lava viewing area within Hawai‘i Volcanoes National Park,” park officials say. “From the east, or Kalapana/County of Hawai‘i side, visitors must hike about 4.2 miles one way along the gravel emergency access road. This entrance is open daily from 3 p.m. to 9 p.m. From the park, or west side, visitors can hike out from the Coastal Ranger Station at the end of Chain of Craters Road, about five miles one-way. About one mile of the hike goes inland of the gas plume over hardened, uneven lava flows. The park entrance is open 24 hours a day.”

“Hikers need to be prepared for a long trek,” the National Park Service warns. “Wear sturdy closed-toe shoes or boots, gloves to protect the hands, and long pants to protect against lava rock abrasions. Carry plenty of water (three to four quart/liters per person). Wear sunblock, sunglasses and a hat. Visitors who plan to stay after dark need a flashlight and/or headlight with extra batteries.”