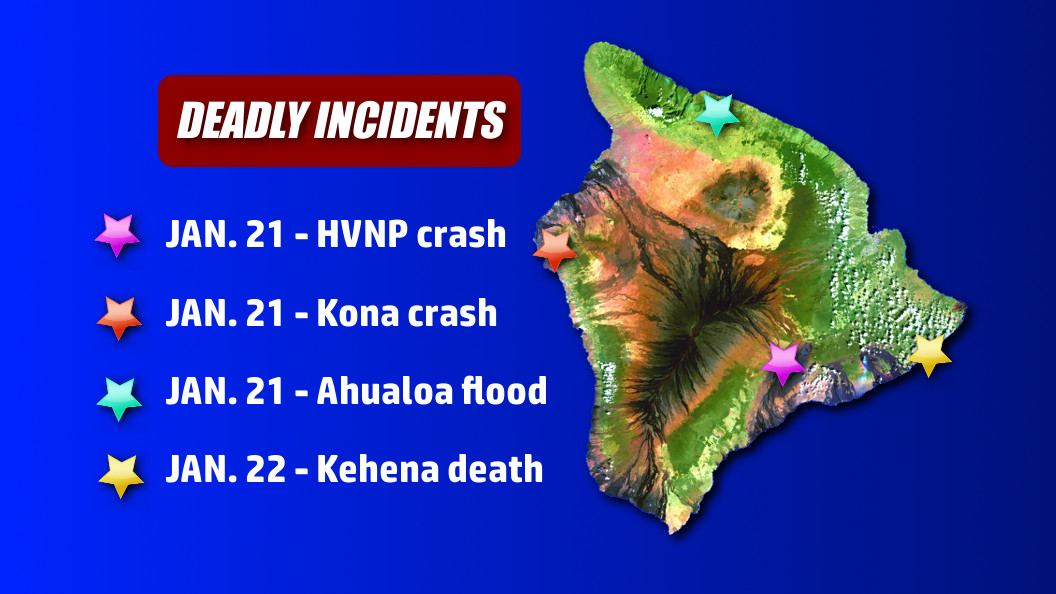 HAWAII ISLAND - Four people died in four, unrelated incidents on Hawaii Island this weekend. Officials are releasing the names of the victims.

HAWAII ISLAND – Police have identified the names of four people killed in unrelated incidents this weekend on Hawaii Island.

Two people were killed on Big Island highways, one in Kona and one in Volcano.

The other two lost their lives in dangerous waters; one in an Ahualoa flash flood and the other in the ocean, off Kehena Beach in Puna.

42-year-old Richard Topenio of Kailua-Kona was killed in a vehicle-bicycle crash Saturday afternoon (January 21) near the 98-mile marker of Queen Kaʻahumanu Highway.

“Responding to a 1:53 p.m. call,” the Hawaii County Police Department reported in a media release, “police determined that a red 2011 Ford pickup truck had been traveling south on Queen Kaʻahumanu Highway when it veered onto the shoulder of the roadway and collided with Topenio, who was riding his bicycle southbound on the shoulder of the highway. Topenio sustained critical injuries from the collision and was taken to Kona community Hospital, where he was pronounced dead at 4:25 p.m. Saturday.”

Police say the operator of the truck, 60-year-old Jeffrey Pelham of Kamuela, was arrested on suspicion of negligent homicide and operating a vehicle while under the influence of an intoxicant. He was later released pending further investigation. It is not immediately known if speed was a factor in the crash.

Traffic Enforcement Unit officers have initiated a negligent homicide investigation and have ordered an autopsy to determine the exact cause of death.

A 65-year-old man from New Jersey was fatally injured in a two-vehicle accident that occurred on Highway 11 at the Nāmakanipaio Campground intersection in Hawai‘i Volcanoes National Park on Saturday afternoon (January 21).

“Rangers reported that a white Hyundai Elantra and a blue Toyota Scion were involved in the traffic accident at about 1 p.m.,” park officials report. The driver of the Hyundai was fatally injured. The other driver, a 33-year-old local male, was transported to Hilo Medical Center by ambulance.

“Rangers and bystanders performed CPR on the 65-year-old male, then a medic unit from the Hawai‘i County Fire Department arrived and took over patient care,” the park says. “The man was pronounced dead at the scene by medical personnel.”

Both men were the sole occupants of their vehicles.

National Park Service rangers are seeking witnesses to the accident, and ask anyone with information to call Park Dispatch at (808) 985-6170. Callers may remain anonymous, park officials say.

47-year-old Beth R. Radl of Honoka’a was killed when she was swept away by rushing rain water Saturday night (January 21).

“Police and Fire Department personnel responded to a 10:42 p.m. Saturday that Radl had tried to cross a ‘river’ of rushing water near her home on the 3900 block of Kahana Drive, when she was swept away by the knee-high water,” police report. “Her body was located at 5:29 a.m. Sunday (January 22) in a stream about a quarter-mile away.”

An autopsy has been ordered to determine the exact cause of Radl’s death.

43-year-old Erik Collins of Kapaʻau died while swimming in rough water at Kehena Beach in Puna on Sunday afternoon (January 22).

Rescue personnel responded to a 12:06 p.m. call “of a man in distress in the water off the Kehena Beach shore. Several people attempted to assist the man back to shore but were unable to get to him due to the rough ocean conditions. The swimmer was last seen going under the water. His body was later recovered by fire/rescue personnel approximately 100 feet from shore.”

Hawaiʻi Island police have initiated a coroner’s inquest. An autopsy has been ordered to determine the exact cause of death.