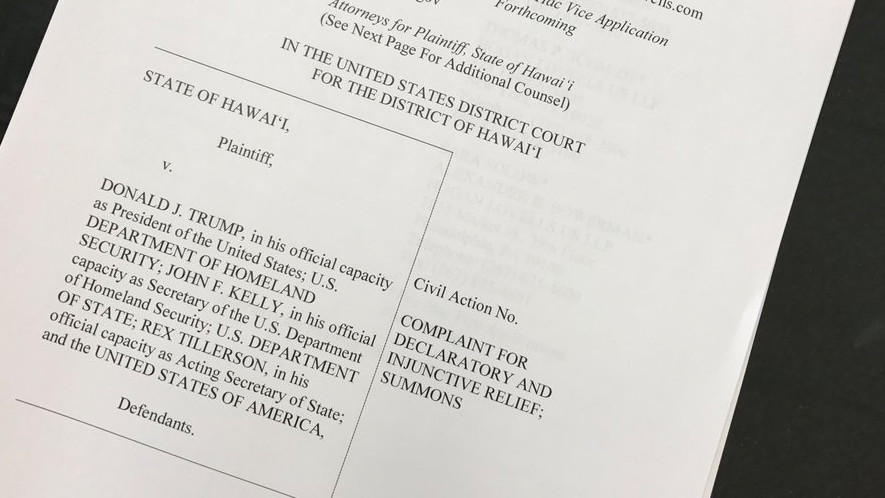 Chin held a press conference on Oahu and his office also issued a written media release on the Executive Order that restricts immigration from seven Muslim-majority countries: Iraq, Iran, Syria, Somalia, Sudan, Libya, and Yemen. Trump’s order also suspends all refugee admission for 120 days and bars all Syrian refugees indefinitely. It grants entry preferences to minority religions. Chin says the order is the beginning of the fulfillment of President Trump’s campaign pledge to implement a “total and complete shutdown of Muslims entering the United States.”

“What makes our country special and a beacon across the world is its inclusive democracy and the rule of law,” Chin said. “Everyone in the United States, including the President, must follow the law and follow the Constitution.”

Hawaii has asked for a hearing on its motion for a temporary restraining order in no more than 14 days. Neal Kumar Katyal, Esq., former Acting Solicitor General of the United States during the Obama Administration, is providing legal assistance.

“Hawaii is an island state. This illegal order affects our state in a unique way,” Attorney General Chin added. “Under this order, an Iraqi permanent resident on the mainland U.S. cannot leave the country without the risk of never being allowed to return, but he still can travel throughout the continental United States. That same person here cannot so much as visit another island within our state for fear of being detained by federal agents at the airport. In the past, the people of this state experienced discrimination by the federal government based on national origin. We must speak up and not let this happen again.”