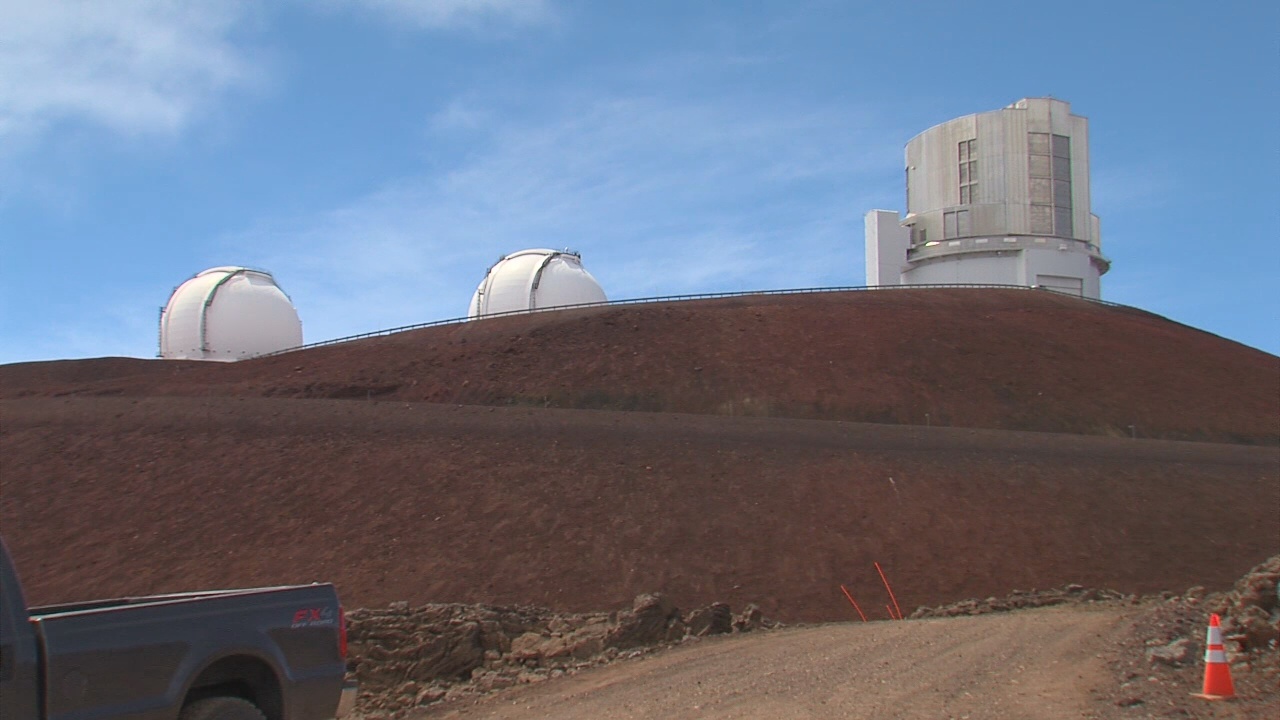 Some of the first pictures taken by the vortex coronagraph in the W. M. Keck Observatory, as well as those captured by the Subaru Telescope’s SCExAO (Subaru Coronagraphic Extreme Adaptive Optic), were released to the public within a two-day period.

Both observatories are situated side by side on the northern ridge of Kūkahau’ula on the summit of Mauna Kea.

The results from Keck’s vortex coronagraph, recently installed inside the workhouse the Near Infrared Camera 2 (NIRC2), are published in the January 2017 issue of The Astronomical Journal.

“The vortex coronagraph allows us to peer into the regions around stars where giant planets like Jupiter and Saturn supposedly form,” says Dimitri Mawet, the inventor of the vortex coronagraph. Mawet is currently associate professor of astronomy at Caltech and a senior research scientist at NASA’s Jet Propulsion Laboratory, or JPL.

Keck revealed the images from two papers in a January 31 announcement. 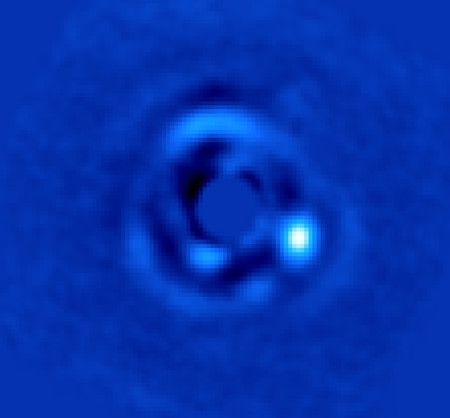 One paper presents the first direct image (right) of the brown dwarf called HIP 79124 B, located 23 astronomical units (1 unit is equal to the distance between our sun and Earth) from a star in a nearby star-forming region called Scorpius-Centaurus.

“The ability to see very close to stars also allows us to search for planets around more distant stars, where the planets and stars would appear closer together. Having the ability to survey distant stars for planets is important for catching planets still forming,” says Gene Serabyn of NASA’s JPL, the overall lead of the Keck vortex project. 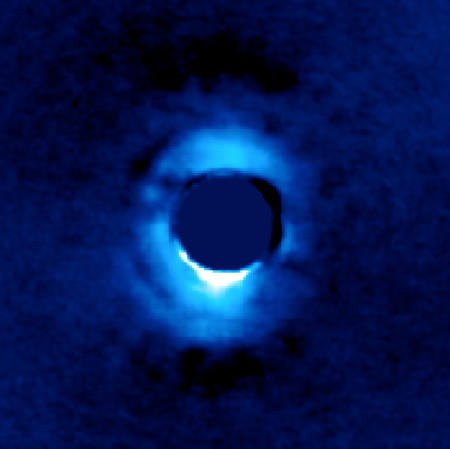 The second vortex paper – part of a study led by Mawet – presents an image (right) of the innermost of three rings of dusty planet-forming material around the young star called HD 141569 A. The material is “made up of pebble-size grains of olivine, one of the most abundant silicates in Earth’s mantle”, Keck reports. Data also shows that the temperature of the innermost ring is a bit warmer than our asteroid belt.

“The three rings around this young star are nested like Russian dolls and undergoing dramatic changes reminiscent of planetary formation,” says Mawet. “We have shown that silicate grains have agglomerated into pebbles, which are the building blocks of planet embryos.”

On February 1, Subaru released its own images taken of other worlds, using its SCExAO instrument that was the result of a “decade of painstaking work.”

Subaru is operated by the National Astronomical Observatory of Japan.

“Maunakea is the best place on this planet to see planets in other stellar systems. Now, we finally have an instrument designed to utilize this mountain’s special gifts and the results are breathtaking,” exclaims Dr. Thayne Currie, who authored the first science result paper.

Subaru’s SCExAO made its first discovery after only a few nights of work using its “true extreme adaptive optics capability.” 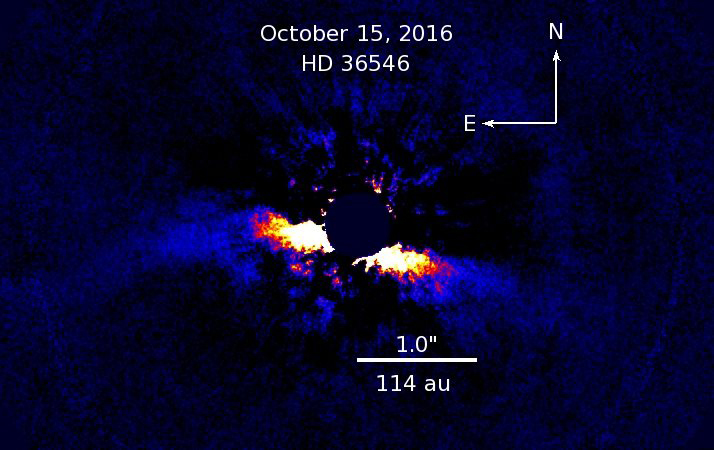 “Last October, SCExAO revealed the first images of a debris disk around a star called HD 36546, a 2 solar-mass star in the constellation Taurus,” a Subaru media release states. “The debris disk appears nearly edge on, is located about twice the distance from its star that the Kuiper belt is from the Sun, and is likely comprised of debris produced as a byproduct of icy planet formation. Based on the youth of the age estimate, the debris disk around HD 36546 might be the youngest debris disk ever imaged and is a critical laboratory for studying the earliest stages of icy planet formation.”

Dr. Nemanja Jovanovic who has been working on the instrument says, “We barely flipped the ‘on’ switch for SCExAO and already saw a new planetary system. The future, which includes a fully optimized SCExAO is extremely promising.”

Subaru also used the SCExAO to obtain data resulting in clearer detections of the star and multiple planet system HR 8799, the “benchmark” system which hosts the first planets ever directly imaged, 11 years ago. “Existing facility AO systems such as the one at Keck or Subaru Telescopes so far detected two or three out of the four planets at H-band,” Subaru writes. “However, SCExAO engineering data obtained in July 2016 (image below) coupled with the general-purpose HiCIAO camera easily detects all four of them and at a far better sensitivity.” 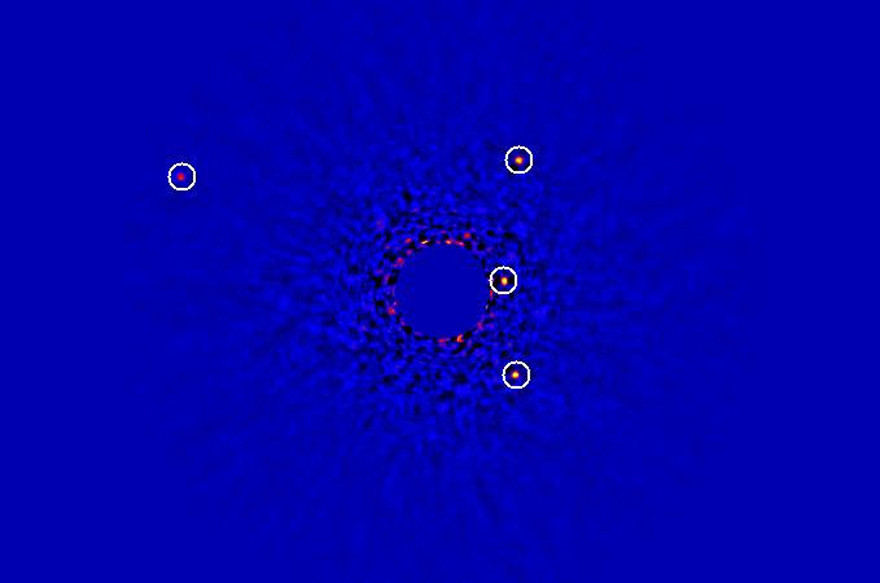 Both the Keck and Subaru media release conclude with a look at how the technology will be applied to future astronomy projects, specifically the Thirty Meter Telescope.

In the Subaru media release, Dr. Currie proclaims, “SCExAO is the type of instrument that will one day show us another planet that might be like the Earth. This is the kind of new knowledge that makes TMT worth it for Hawaii.”

Keck says its vortex coronagraph “will help with a planet imager planned for the future Thirty Meter Telescope and with proposed NASA space missions, such as the Habitable Exoplanet Imaging Mission (HabEx) and the Large UV/Optical/IR Surveyor (LUVOIR), which would use next-generation vortex coronagraphs currently being designed in Mawet’s group at Caltech.”