HAWAII ISLAND (BIVN) - Up to 3 inches of snow with light ice are forecast for Mauna Kea and Mauna Loa, while Hawaii Island expects to avoid the worst of the passing cold front. 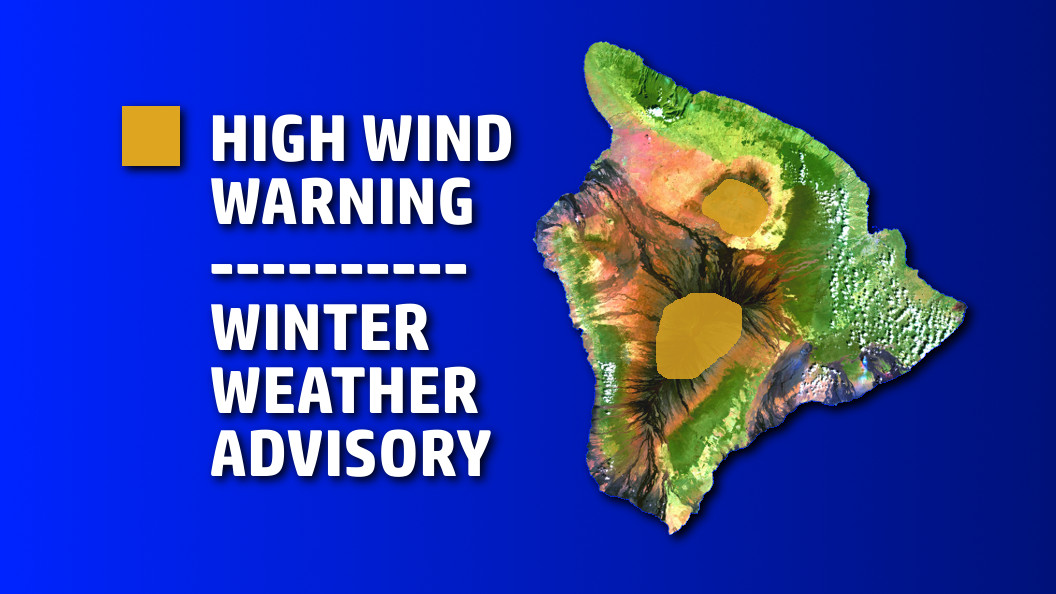 At 12:10 a.m. HST, the National Weather Service in Honolulu said radar and surface observations indicated wind gusts to near 50 mph at the Kona airport, associated with a thunderstorm.

Meanwhile, forecasters say “strong and gusty downslope winds have been reported in the upslope Hamakua district. These winds wil continue over the next hour or so, but are expected to gradually diminish thereafter.”

UPDATE (9:20 p.m.) – A strong thunderstorm will affect leeward sections of the Big Island, the National Weather Service said in a special weather statement.

“At 9:11 p.m. HST, a strong thunderstorm was located near Kailua-Kona, moving northeast at 35 mph,” forecasters said. “Wind gusts of 40 to 50 mph are possible with this storm as it moves through.”

Forecasters say torrential rainfall is also occurring with this storm, and may cause localized flooding.

UPDATE (7:30 p.m.) – A line of strong thunderstorms is approaching north and west sections of the Big Island.

According to the special weather statement, radar indicates “wind gusts of 45 to 55 mph are occurring with these storms. If the storms hold together, these winds could impact north and west sections of the Big Island between 7:30 pm and 8:45 pm.”

HAWAII ISLAND – The National Weather Service in Honolulu has issued a Winter Weather Advisory for Big Island summits above 12,000 feet, as a High Wind Warning remains in place for the higher elevations.

A cold front and its associated upper level trough will reach the Big Island late tonight. Periods of snow showers and freezing rain are expected for the tops of Mauna Kea and Mauna Loa and may linger into Sunday morning.

Winds are whipping west to southwest at 50 to 75 mph, and will decrease to 35 to 55 mph late. Maunakea Rangers say the road to the summit of Mauna Kea is closed to the public at the Visitor Information Station (elevation of 9,200 feet) due to the high winds on the summit. The summit of Mauna Loa is also closed due to extreme weather conditions.

The heavy rains that soaked the rest of the Hawaiian Islands today are not expected for the Big Island. “Chances for flooding rainfall and thunderstorms should be confined to Maui County tonight, where the front will be centered,” the National Weather Service wrote in a 5:22 p.m. forecast. “Forecast models also show some of the frontal moisture reaching northern and western Big Island late tonight, but at this time, we do not anticipate extending the Flash Flood Watch there as conditions will be trending less conducive for flooding rain.”

“The front will rapidly weaken as it stalls near the Big Island on Sunday, while a rather dry westerly flow prevails elsewhere,” the weather forecast states.

Meanwhile, a Special Marine Warning was issued for the Alenuihaha channel, Big Island leeward waters, as well as Maui waters until 7 p.m.

“At 5:28 p.m. HST, radar indicated a line of strong thunderstorms capable of producing winds to 40 knots,” the warning stated. “These storms were located along a line extending from near maliko boat ramp to 38 nm west of Keahole point, moving east at 20 knots.”

We will update this page as the storms draw closer.