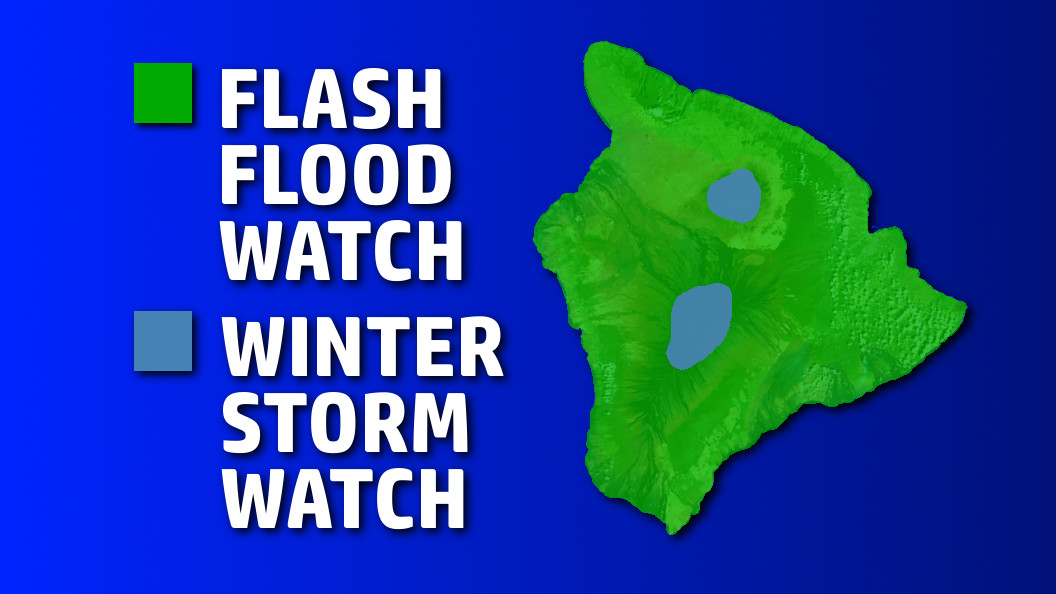 HAWAII ISLAND (BIVN) - Heavy downpours and thunderstorms that could lead to flash flooding, as well as snow and lightning for Mauna Kea and Mauna Loa on Tuesday.

HAWAII ISLAND – A Flash Flood Watch is in effect for the entire State of Hawaii, including the Big Island, through Wednesday.

That’s on top of a Winter Storm Watch for Hawaii Island summits above the 11,000 feet elevation. Heavy snow and cloud to ground lightning strikes are possible Tuesday over Mauna Kea and Mauna Loa.

The National Weather Service in Honolulu says increasingly moist and unstable air is overspreading the islands tonight and Tuesday. “Spotty intense showers, mainly windward and mauka tonight, could become more widespread by Tuesday,” forecasters say. The strong upper level disturbance “will cause a surface trough or low to develop near the islands over the next couple of days, enhancing the potential for heavy downpours and thunderstorms that could lead to flash flooding. Conditions should gradually improve later in the day on Wednesday.”

Other islands have already been under a Flood Advisory for part of the day on Monday. “Some streams and normally dry gulches are expected to run high and could quickly overflow their banks,” weather forecasters say. “Intense rainfall in poor drainage and urban areas could also lead to flash flooding.”

The summits of Mauna Loa and Mauna Kea will have the potential to receive heavy snow accumulations tomorrow. “The Winter Storm Watch has been cancelled for tonight, but remains in effect for Tuesday and Tuesday night, and has been extended into Wednesday, the National Weather Service says. Snowfall of more than 6 inches possible.