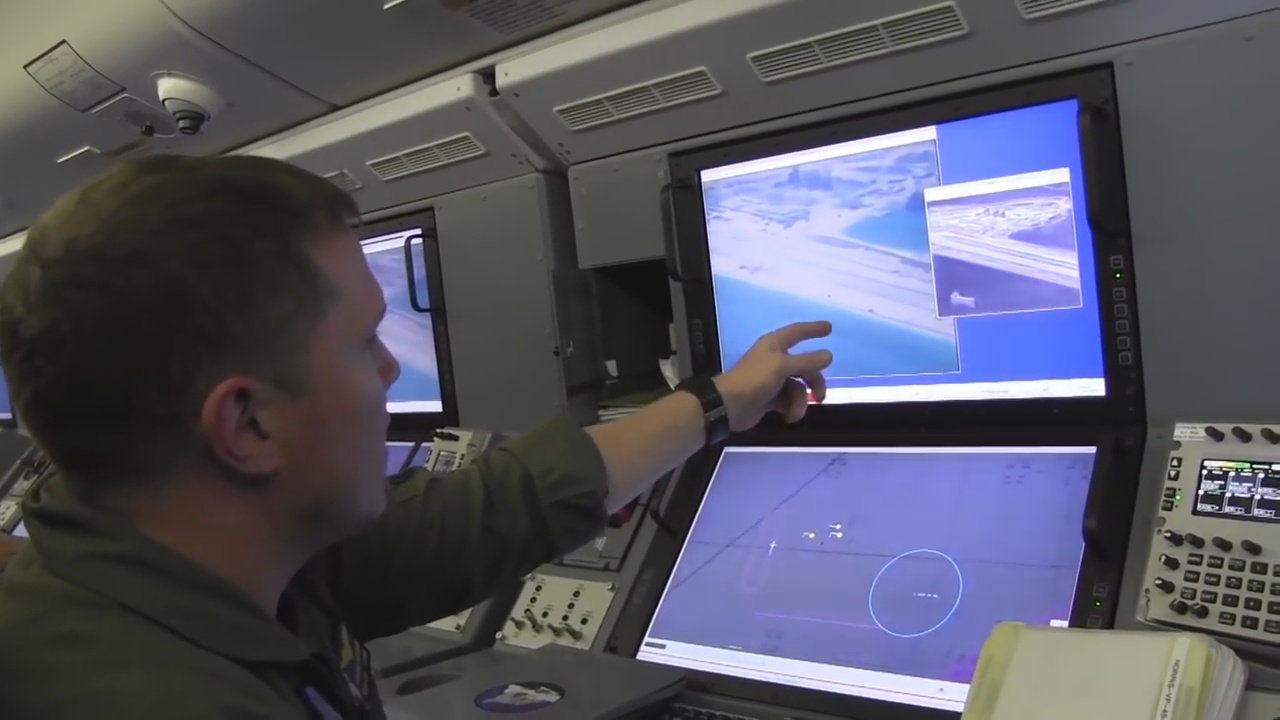 Image from video by U.S. Navy

The discussion, which was attended by Hawaii Congresswoman Tulsi Gabbard, delved into “China’s skirting of international law and its desire to establish dominance over one of the most important shipping lanes in the world,” which committee chairman Rep. Ted Yoho (R, FL-3) said “cannot go unchecked.”

“The People’s Republic of China’s aggressive and provocative behavior in the maritime territorial disputes represents a threat to vital U.S. interests,” Yoho said, “as severe as those from Russia, Iran, North Korea and terrorism from the Middle East, according to the Heritage Foundation’s 2017 index for U.S. military strength.”

Rep. Yoho said that since 2013, “China has rapidly advanced its maritime capabilities, employed them to transform the South China Sea with artificial islands, place Japan under increasing pressure in the East China Sea, and attempt to restrict freedom of navigation and its near waters.”

“Unbelievably, China has suffered little – if any – cost of this maritime push,” Yoho said.

Ranking subcommittee member Rep. Brad Sherman (D, CA-30) brought a different perspective to the table. “There are 20 maritime disputes that do not involve China and not a single one of them has been the subject or even a partial subject of any hearing of this subcommittee,” Sherman said. “Why? Because none of those disputes justify a massive increase in the American military budget and none of those disputes distract us sufficiently from the war that China is waging against American working families.”

On the same day as the subcommittee hearing, United States Secretary of State Rex Tillerson met with Chinese State Councilor Yang Jiechi and “affirmed the importance of a constructive bilateral relationship and of regular high-level engagement between the United States and China,” according to Acting Spokesperson Mark Toner.

“Our new Secretary of State Tillerson warned of a more confrontational South China Sea policy,” said Rep. Scott Perry (R, PA-4) during the Foreign Affairs subcommittee hearing, adding Tillerson “also said that the island building had to stop and that access to those Islands would not be allowed.”

“The president has recognized the one-china policy, as we all know,” said Rep. Perry. “The last administration expressed a floor for China, including the militarization of the South China Sea. But is as far as I can tell that was never backed up … never backed up with any action.”

“If we’re going to maintain that there is a floor for China,” Perry asked Mr. Dean Cheng, a Senior Research Fellow for The Heritage Foundation’s Asian Studies Center, “what specific conditions should we articulate to China regarding that, and when China invariably breaks the floor or floors what should our actions be?”

“We should be treating our allies and our friends at least as well as we treat China,” Cheng answered. “I think that the incorporation of China into things like RIMPAC when forces from – for example Republic of China, Taiwan – are excluded, (it) sends, I think, a very distinct message to Beijing. Especially when (China) shows up, not only with the forces that are supposed to show up, but also spy ships, which were uninvited.”

“And yet we are apparently going to invite them, yet again,” Cheng said. “that isn’t even a floor, that’s not a net, that’s that’s an open doorway.”

Rep. Gabbard (D, H-2) wanted to focus more of the conversation on China’s role in dealing with North Korea.

“No one’s really talked about North Korea yet,” Gabbard said, “and how the various courses of action that are being suggested here will impact the very direct threat that we face from North Korea, and the reality that any resolution to the North Korea situation will require the engagement and cooperation of China.”

“Representative, frankly, I don’t see any solution to North Korea,” Cheng said. “The North Korean regime has associated itself with retaining its nuclear capability, and China has repeatedly demonstrated for pretty much the last 30 years it has no intention of solving the North Korean problem, particularly for the United States.”

“The reality is that North Korea’s nuclear weapons aren’t aimed at China, they are aimed at Japan, South Korea, and the United States,” Cheng said, “which from the Chinese perspective is not a great solution but not necessarily a particular troubling one.”

Cheng did note, however, “that the one time that anything was done the truly caught the North Korean regime attention was when we shut down Banco Delta Asia by using the financial networks to force the Chinese, again, to make that choice: the millions of dollars that they gained from working with North Korea, or the billions of dollars in financial flows that would otherwise occur. Unfortunately, after less than a year we decided that those sanctions were too dangerous to continue and sustain against North Korea.”

Dr. Michael Auslin, Resident Scholar and Director of Japan Studies at the American Enterprise Institute, agreed with Cheng, somewhat, saying “there are no good solutions to North Korea” but there are lots of bad solutions.

“Given the increasing erratic nature of the Kim Jong-un regime,” Auslin said, “the assassination of his half-brother – who is protected by China – just a few weeks ago in Malaysia, as well as the assassination in 2014 or 13 of Jang Sung-taek, who was Kim Jong-un’s uncle but more importantly China’s main agent in North Korea, means that Beijing is worried about their influence – as we’re worried about our lack-of – and there may be opportunities, out of pure self-interest, for the two of us to figure out ways of pressuring that regime, or at least talking more creatively about how to contain it.”

Dr. Auslin warned that at some point “we’re going to have to decide when we declare (North Korea) a nuclear power. It is a nuclear power. I understand that we do not want to shred the non-proliferation regime, but we have to wake up to reality one day.”

Michael D. Swaine, Ph.D. – Senior Fellow at the Carnegie Endowment for International Peace Asia Program: well I agree… that this is not a problem with a solution

“Unfortunately, what drives this situation the most is the behavior of North Korea which no country outside of North Korea has real control over including the Chinese,” said Michael D. Swaine, Ph.D., a Senior Fellow at the Carnegie Endowment for International Peace Asia Program. “I believe that the Chinese have moved in their position towards a greater degree of a cooperation and support in dealing with North Korea. They certainly wouldn’t fully endorse everything that the United States might want to see toward North Korea for legitimate national security interests of their own, as well as other interests which may not be – from our perspective – as legitimate. But I do think that we have choices here. The policy – thus far – has not worked, so we need to think about a new way of addressing this issue. We can’t simply regard the Chinese as being the panacea; that they’re going to solve it because they’re not going to solve it.”

“We have two different paths that we can go,” Swaine added. “One of them is towards a greater degree of unified sanctions against North Korea in the hope that the regime will collapse or give up its nuclear weapons. I think that’s very unlikely. I think they’re committed to these weapons and they’re not likely to give them up and they’re going to continue to move towards a deliverable ICBM capability with a nuclear warhead. And when they get close to that capability the question is what do we do about that?”

Swaine continued, “in my view the only thing that one can do is … you can be extremely clear about the consequences of any use – or threat of use – of a nuclear weapon by North Korea. That it involve the destruction of North Korea. And that this applies to … threats to South Korea and Japan, our allies for whom we have a nuclear umbrella. At the same time, however, I think we have to consider whether or not it’s possible to develop a diplomatic strategy in which you address each of the concerns that the North Koreans have said that they have on their security front.”

“Many people say this is all useless because the North Koreans will ignore all this and continue to take advantage of it,” Swain said, “but you can make the argument that the United States and the other powers have not fully tried to implement what you call an ‘omnibus approach’ to North Korea that would give them – over a period of time in response to certain actions that they would take – a certain level of benefits for them, economic and diplomatic. And if they turn those things down and you offer them all in good faith, and the Chinese sign onto that, then the basis for the Chinese to continue to not cooperate in dealing with North Korea will will be reduced, in my view.”

Rep. Gabbard told Dr. Swaine that the time to ask that question, ‘what will we do’ is now. “And understanding as we look at these other issues – whether it be the South China Sea or other issues in the region – we can’t operate in the silo with any of them because of the ripple effects that will occur as we look at the various threats that exist there,” Gabbard said.