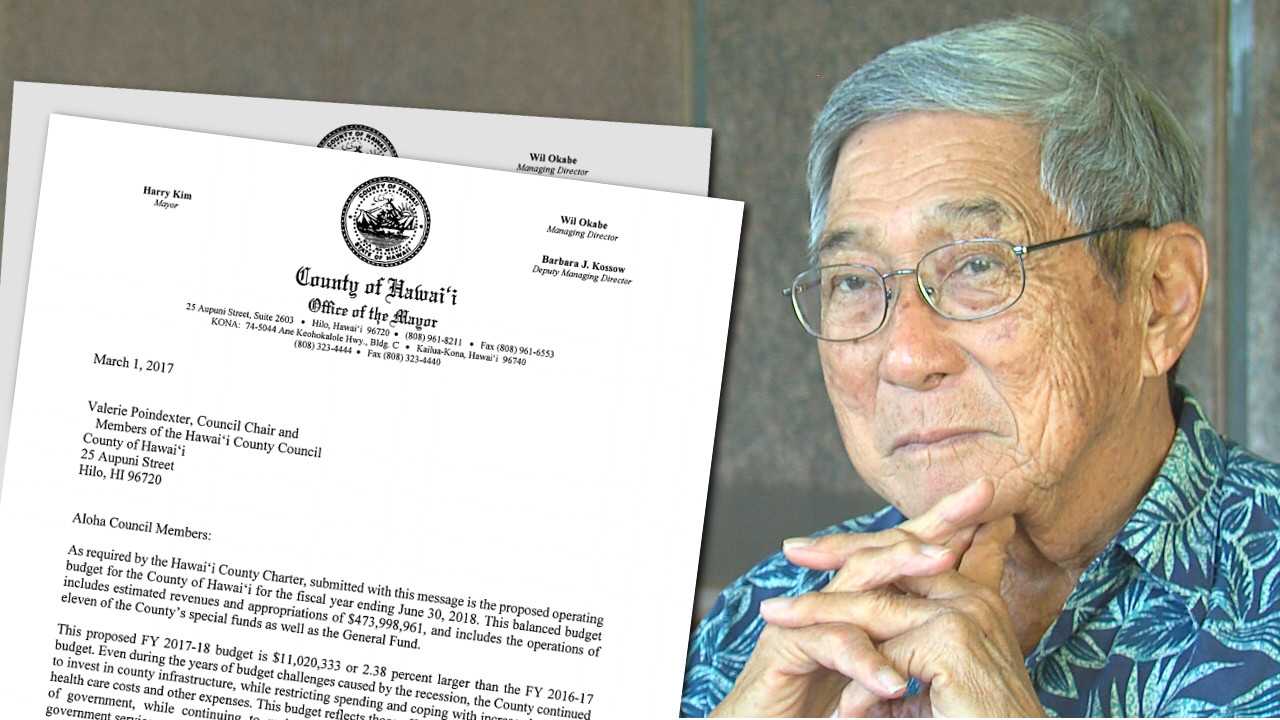 The following message was shared with Big Island Video News by the Office of Hawaii County Mayor Harry Kim. The message is addressed to the Hawaii County Council and presents the preliminary budget for the 2017-2018 fiscal year.

As required by the Hawai‘i County Charter, submitted with this message is the proposed operating budget for the County of Hawai‘i for the fiscal year ending June 30, 2018. This balanced budget includes estimated revenues and appropriations of $473,998,961, and includes the operations of eleven of the County’s special funds as well as the General Fund.

This proposed FY 2017-18 budget is $11,020,333 or 2.38 percent larger than the FY 2016-17 budget. Even during the years of budget challenges caused by the recession, the County continued to invest in county infrastructure, while restricting spending and coping with increased employee health care costs and other expenses. This budget reflects those efforts to control the size and cost of government, while continuing to maintain essential police, fire and other core County government services.

We face a challenge posed by $11.7 million in additional employee benefit expenses in the coming year. Most of these costs were the result of increases in health benefits, post-employment benefits, Social Security contributions and retirement obligations for our existing employees and retirees. These costs reflect the lion’s share of the difference between last year’s budget and this year’s budget.

Despite those additional costs, this budget does not require any increase in real property tax rates.

The following table describes the budgeted expenditures for FY 2016-17 and the proposed budget for FY 2017-18 for each fund: 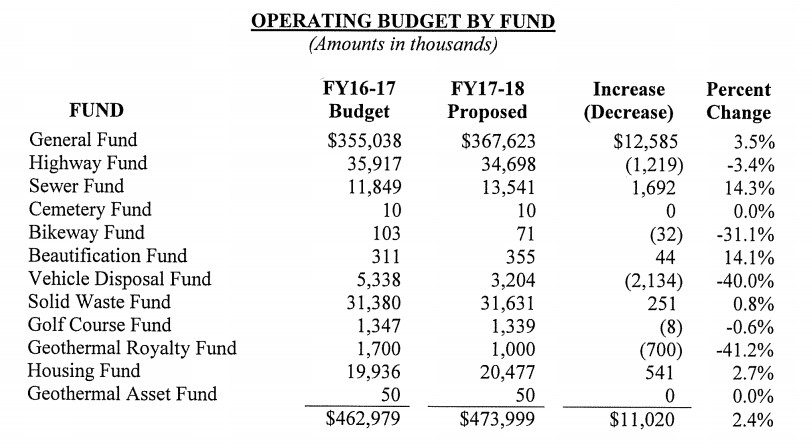 The following table presents a summary of projected FY 2017-18 revenues from various sources and the changes from the current budget: 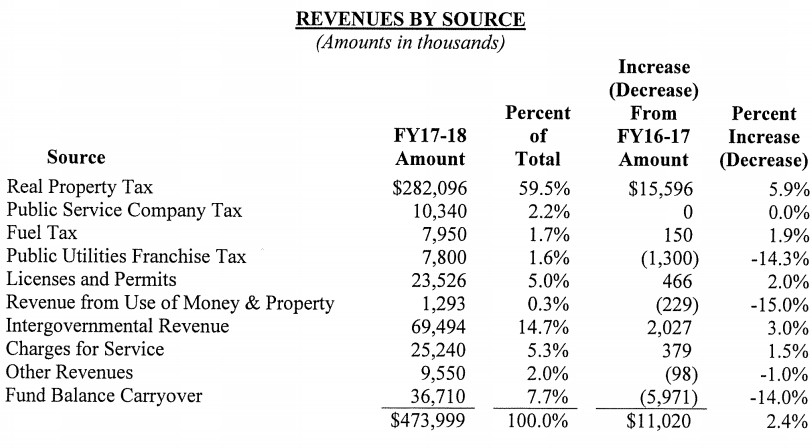 Real Property Tax. Real property tax revenues are expected to increase by 5 .9%, or $15.6 million, due to new construction and an increase in taxable values.

Public Utilities Franchise Tax. Decreased public utility revenues are expected to result in a decrease of $1.3 million, a reduction of 14.3% in franchise tax revenue.

Intergovernmental Revenue. Increases in grant revenues of about $2.0 million reflect those grants we are aware of at this time.

Fund Balance Carryover. This budget reflects $6.0 million less in carryover savings from the current year Operations of all funds.

The following table presents a summary of projected FY 2017-18 expenditures from various sources and the changes from the current budget: 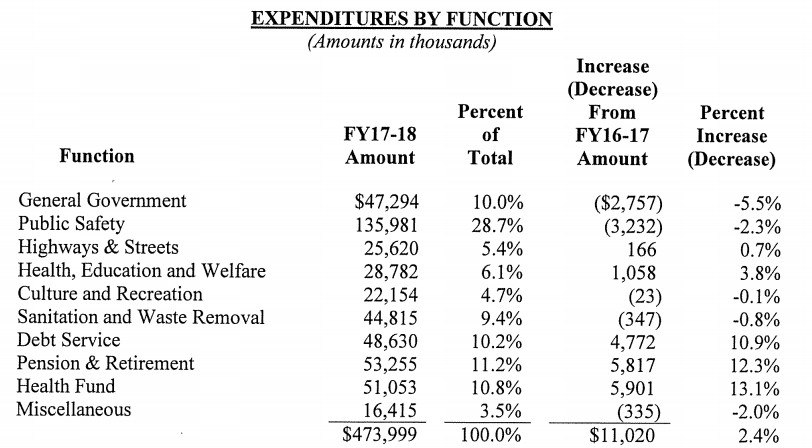 Savings were achieved throughout the budget as the result of cuts made by the departments, reductions in travel, and the decision to delay hiring and equipment purchases. Negotiations for all eight bargaining units are continuing at this time. No provision for pay raises has been included in the budget, as the amount is not yet known.

This proposed budget represents a collaborative effort by our departments to address the needs of our growing population in a way that is both responsive and fiscally responsible. Careful planning and conservative budgeting has positioned us to make planned investments in our communities, while maintaining core services and meeting our obligations to our employees.

The continued increase in property values, low unemployment rates, and steady hotel occupancy levels indicate continued economic stability. We remain optimistic that the County’s economic outlook will continue to improve, and believe that our efforts to promote renewable energy, agriculture, tourism, and higher education are an investment in the future of our island. The recent boost in our bond rating is assurance that the independent rating agencies share this same view of our County’s potential. We continue to manage our resources in a fiscally responsible manner, to support our youth, our communities, and to protect public safety, and ask for your support in these efforts.

We look forward to working closely with the County Council in the months ahead, to address our community’s new and ongoing demands for public services, while also maintaining a balanced and responsible budget.