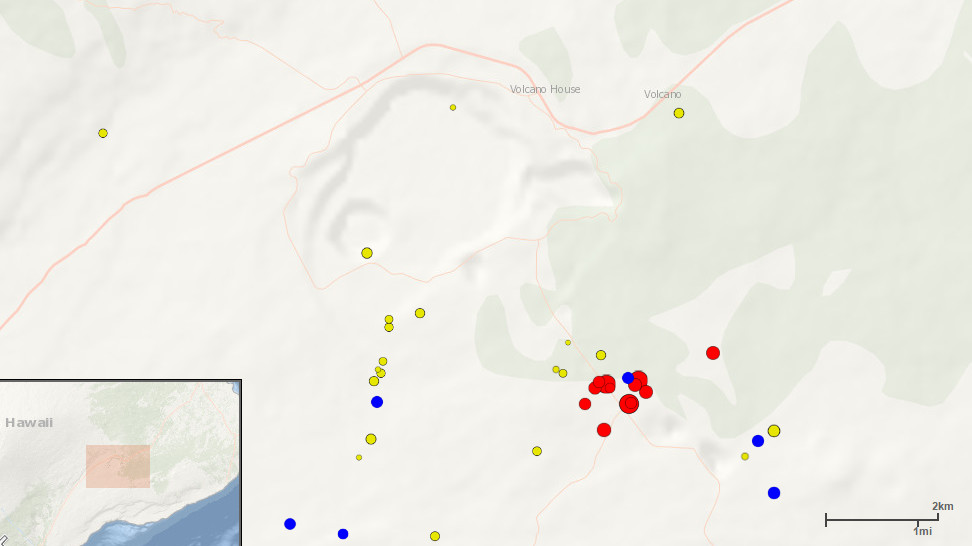 The USGS Hawaiian Volcano Observatory, which measures and tracks earthquakes, reports 31 earthquakes were recorded over a period of 42 minutes on Sunday. The activity began just before 6 a.m. on March 5. The swarm is located about 5 miles south of Volcano Village inside Hawaiʻi Volcanoes National Park (red dots in the USGS map above).

The strongest quake was measured at a magnitude 3.9. Most rest have been measured between magnitude 1.7 and 3.5.

The USGS “Did you feel it?” website received more than 30 felt reports within an hour of the largest earthquake, which occurred at 6:13 a.m. “Weak to light shaking, with maximum Intensity of IV, has been reported,” scientists say. “At that intensity, damage to buildings or structures is not expected.”

“The earthquakes were concentrated about 5-6 km (3-4 mi) southeast of Kīlauea’s summit in an area between Hi‘iaka and Koʻokoʻolau Craters on the Chain of Craters Road,” reported the USGS HVO in a later media release. “The sequence consisted of 31 earthquakes over a period of about 42 minutes. The eight largest events had magnitudes ranging from 1.7 to 3.9 and depths of about 2-4 km (1-2 mi) beneath the surface.”

Scientists say the “size and location of this morning’s earthquake sequence suggest a source that may be related to the ongoing pressurized magma storage system beneath the Kīlauea summit area.” According to Tina Neal, HVO Scientist-in-Charge, “the earthquakes caused no significant changes in Kīlauea Volcano’s ongoing eruptions. No changes in deformation or ground surface cracks were observed in the area.”