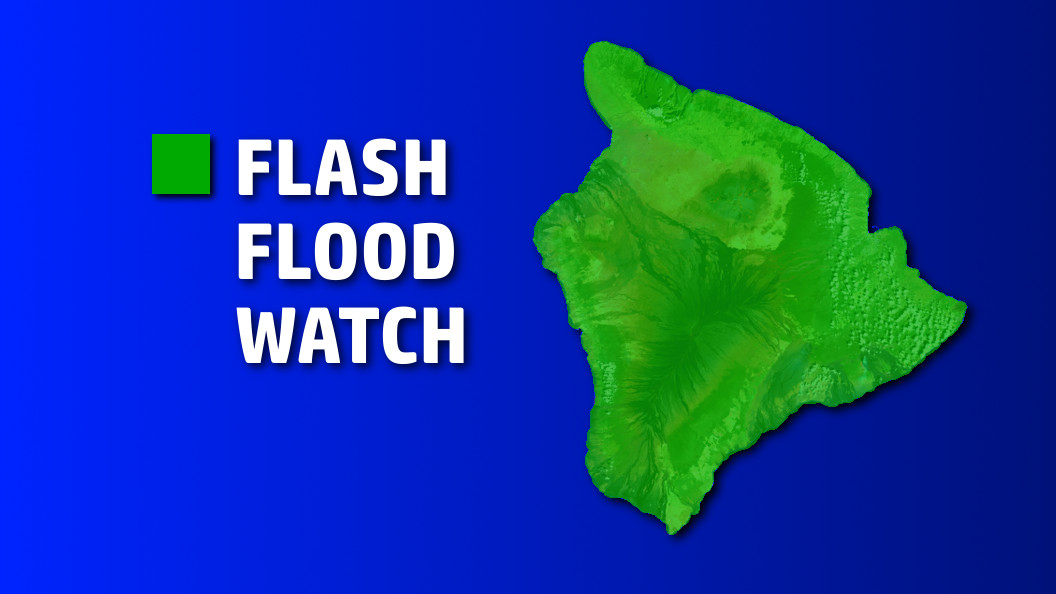 HAWAII ISLAND (BIVN) - A Wind Advisory is also in effect for the Big Island summits of Mauna Kea and Mauna Loa.

UPDATE (10:30 p.m.) – A Flood Advisory has been issued for parts of West Hawaii until 11 p.m. The National Weather Service in Honolulu reported that radar indicated heavy rain associated with a thunderstorm across the upper portions of the leeward Big Island at 9:25 p.m., mainly impacting Mamalahoa highway between Puuanahulu and Waikii.
Rainfall rates in excess of two inches per hour will lead to low visibility and ponding of water, forecasters said.

HAWAII ISLAND – The National Weather Service in Honolulu has issued a Flash Flood Watch for the entire state of Hawaii through late Wednesday night.

“An upper level trough will strengthen as it digs toward the islands during the next couple of days,” forectasers wrote in a 3:52 p.m. message. “While isolated heavy showers could develop over all islands, the main short term threat for heavy flooding rainfall will be along a band of moisture currently stalled over Maui and northern Big Island.” This band may drift northward on Wednesday night.

“Though the threat is marginal,” the National Weather Service wrote in another message that “mainly due to the isolated nature of the potential heavy showers, we felt that a Flash Flood Watch is appropriate, since there will be a prolonged period of heavy shower potential and the possibility of anchored showers under light winds. The Flash Flood Watch has been issued for all islands, with the greatest flood potential remaining along the low level moisture boundary.”

Deeper moisture is expected to surge northward over the state by Wednesday, maintaining the threat for flash flooding. “On Thursday, the upper level trough will gradually weaken overhead, but conditions will remain rather moist and unstable,” forecasters say. “The Flash Flood Watch currently runs through Wednesday night but may need to be extended into Thursday.”

A Wind Advisory is also in effect for Big Island summits until 6 p.m. Wednesday. Mauna Kea and Mauna Loa could see sustained winds of at least 45 mph, or gusts of at least 55 mph. Motorists should use extra caution.