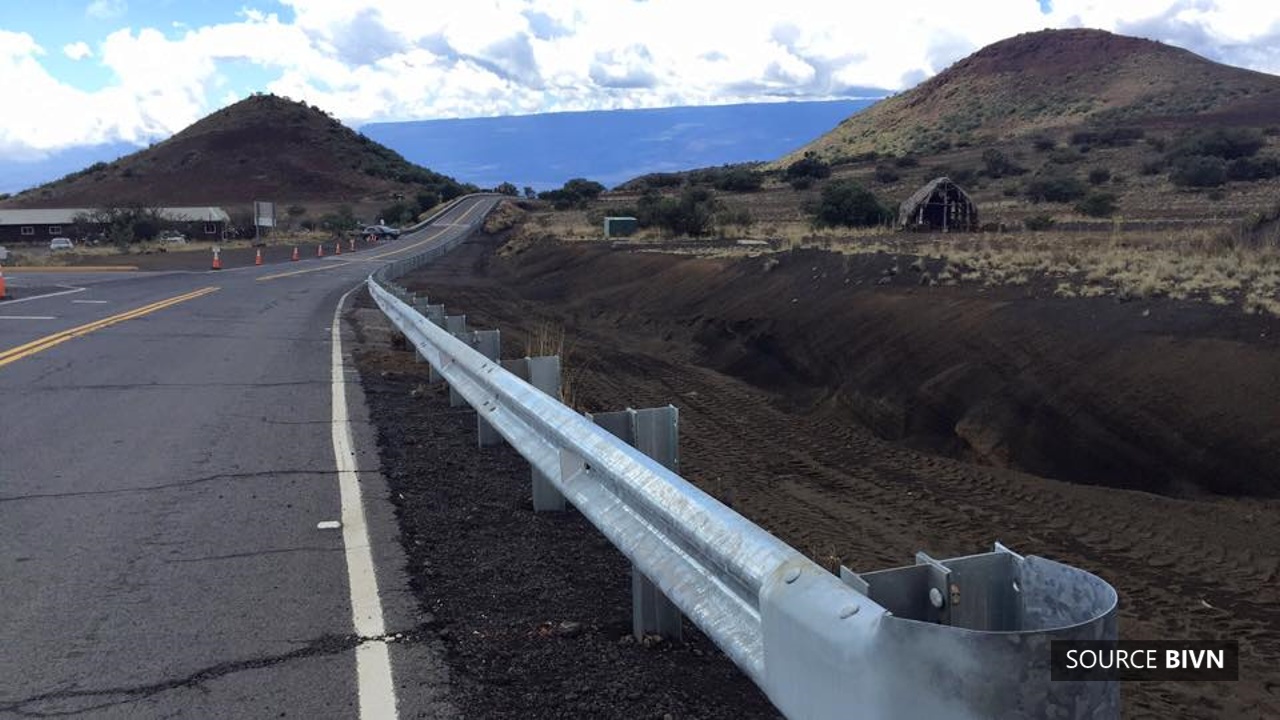 MAUNA KEA (BIVN) - A group of 15 individuals has submitted testimony for an environmental assessment, voicing opposition to university plans to improve the area around the Visitor Information Station.

MAUNA KEA, Hawaii – A plan to increase parking and make other improvement at the Mauna Kea Visitor Information Station has drawn criticism from the same group that has opposed other University of Hawaii projects on the mountain.

The letter was signed by 15 individuals and included two organizations, Mauna Kea Anaina Hou and the Temple Of Lono, and submitted as comment for the draft environmental assessment for the project. Many of the signatories are also participants in the Thirty Meter Telescope contested case hearing, taking positions in opposition to the permit to build the observatory high on the mountain. Debbie Ward is the group’s designated contact.

The University of Hawai’i Hilo is proposing a set of infrastructure improvements at the 19-acre Halepōhaku area, which is managed by the university under a lease from the Hawaii Department of Land and Natural Resources. The project would “accommodate and address the increase in the number of visitors to the mountain; ensure the safety of visitors and workers; prevent unintended impacts to natural, historic, and cultural resources on the Halepohaku and adjacent parcels; and comply with the BLNR-approved Maunakea Comprehensive Management Plan” the university states. 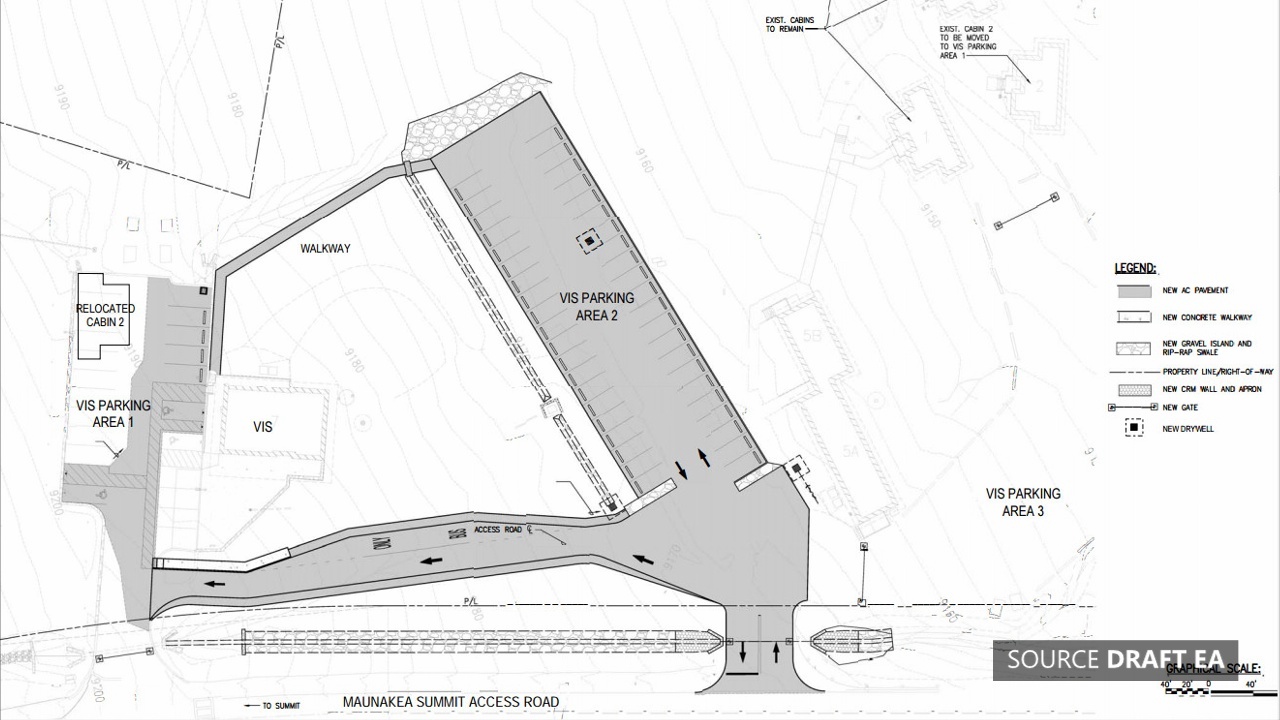 The project will include a new means of “ingress and egress for vehicles to the Visitor Information Station (VIS), a new access lane and parking area, paving of an unimproved path to provide access from the new parking area to the VIS, drainage features, a greenhouse, and relocation of a cabin.”

However, the hui against the project says a review of the draft EA “led us to conclude that the present and future anticipated cumulative impact is significant, and this project, added to other anticipated projects, would significantly impact critical habitat for the palila, pave over historic sites, impede cultural access to public lands at the whim of the University, continue to drive increased visitor capacity, and increase the potential for invasive species introduction.”

The group notes that “at the same time that the Institute for Astronomy has cut the hours of the visitor center, and cut the number of star-gazing nights from seven to four, they now propose the close gates to the parking area to close the public (rightholders) out of public lands. The University purports that this proposal is intended to improve public health and safety, but the benefits are marginal, and do not outweigh the costs.” 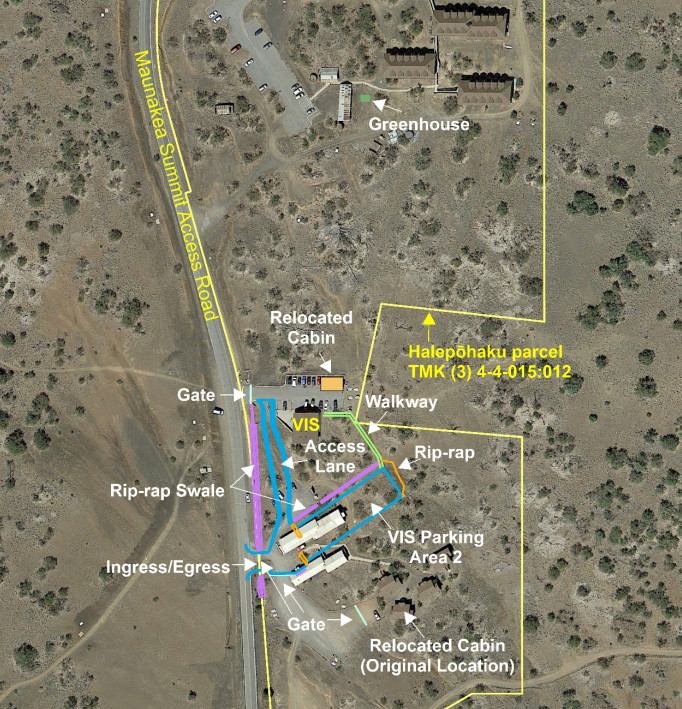 The 12 page document dissects the EA point by point, starting with the purpose and need for the project.

“With just over twenty years remaining on General Lease No S-5529,” the letter states, “and with Governor Ige’s stated intent to reduce the number of visitors, including commercial tours, to Mauna Kea, it is not clear in the section what justification can be made for construction of expanded parking areas. No mention is given to reducing the number of commercial tours, as outlined by the governor in 2016.”

“The stated purpose, to address the increase in the number of visitors to the mountain, cannot be justified, given the budgetary constraints of the Mauna Kea Support Services,” the letter states. “The VIS interior is largely devoted to promotion and sales of merchandise. Its hours of operation are not entirely relevant to public safety. Closure of a public parking area when the VIS is closed does not provide the public with access to toilets, water, space for acclimatization, nor does it allow access to areas used in cultural practice and ceremony.”

The recently constructed guard rail in place of the “ad hoc shoulder parking” across from the VIS – built under the scope of a separate project – was criticized by the group, which said the rail “was an ill-conceived attempt to justify the control and restriction of resident and tourist parking by gating the parking lot at will.”

“The new guardrail also restricts Practitioners from going to the Hale and the historic site conveniently and practically stops kupuna and disabled from that activity (in having to go around the “ends” of the guardrail to access the area). A cut in the guardrail large enough for access to the Hale and trails, along with re-instating the crosswalk, would be imperative to protecting public health and safety.”

The crosswalk – the site where TMT opponents made their stand in 2015 – was also removed.

“Did OMKM consult or request the guardrail emplacement and the removal of the crosswalk? What entity was responsible for these actions?” the group asked.

The group also takes issue with plans to relocate or demolish the Northern longhouse, the unspecified operation / funding of a proposed greenhouse, and proposed installation of gates which “signals the intent to disallow any stopping at the Hale Pohaku site outside VIS hours, which are now restricted.”

“In light of the punitive closure of the restrooms and portable johns in 2015,” the group writes, “it is clear that far from improving safety of residents, the OMKM intends to limit, not improve, access.”

Fritz Klanser with the Office of Mauna Kea Management said in an earlier interview that the proposed greenhouse will help OMKM “grow native plants so we can restore the surrounding area, and both manage the impact from visitors and parking and traffic, and promote restoration of native habitat in the remaining parcel.”

The group also targets a plan to relocate one cabin to the existing VIS parking area, which the group says would hamper access to the restroom, hamper handicapped parking, and act as an “imposing gateway to the cultural access of the ahu” located within the DLNR silversword enclosure.

The group also raises the issue of federally protected palila, which they say “have been recorded using the area.” The mamane woodland is critical habitat the endangered bird.

“Removal 60-65 mamane trees that are tens to hundreds of years old cannot be replaced 2:1, particularly in the area adjacent to the human use area, often over-run by hikers, photographers, picnickers, and more,” the group warns.

In the EA, the University states it has undergone consultation with a number of entities in regards to projects potential impacts the palila habitat, including the U.S. Fish and Wildlife Service.

With 42 stalls planned for the new VIS parking area 2, the group wants to know if the number of commercial tour permits will also be increased, while wondering if a different project would better meet the needs for safety on the mountain.

“Given that a recent fatality, and numerous other vehicular accidents have occurred on the Mauna Kea Access Road, a higher priority for CIP funding would appear to be a constructed runaway lane for cars and trucks whose brakes have failed descending the mountain,” they write. “Governor Ige narrowly escaped a possible accident from a brake failure above Hale Pohaku when the vehicle he was riding in experienced a serious problem, prior to his transfer to another vehicle. When considering the potential for overheating of brakes, such as the occurrence that led to a recent fatality, why would closure of visitor parking at mid-elevation ever be justified?”

The group is asking that the FONSI (Finding Of No Significant Impact) be denied, that the No Action Alternative be taken, and/or that that an EIS be conducted.