WASHINGTON D.C. – On April 26, President Donald Trump signed an Executive Order on the Review of Designations Under the Antiquities Act, which promises to take a look at the national monuments named over the last two decades.

“Today, I am signing a new executive order to end another egregious abuse of federal power, and to give that power back to the states and to the people, where it belongs,” Trump declared at a podium before moving to sign the order. “The previous administration used a 100-year-old law known as the Antiquities Act to unilaterally put millions of acres of land and water under strict federal control — have you heard about that? — eliminating the ability of the people who actually live in those states to decide how best to use that land.”

“Today, we are putting the states back in charge,” Trump said. “It’s a big thing.”

“Altogether, the previous administration bypassed the states to place over 265 million acres — that’s a lot of land, million acres,” trump said. “Think of it — 265 million acres of land and water under federal control through the abuse of the monuments designation. That’s larger than the entire state of Texas.”

According to the Department of the Interior, the Antiquities Act of 1906 authorizes the president to declare federal lands of historic or scientific value to be national monuments by designating the “smallest area compatible with proper care and management of the objects to be protected.”

“Since the 1900s, when the Act was first used, the average size of national monuments exploded from an average of 422 acres per monument,” the DOI wrote in a media release. “Now it’s not uncommon for a monument to be more than a million acres. The designations of the Grand Staircase-Escalante National Monument in 1996 and the Bears Ears National Monument in 2016 are considered the book-ends of modern Antiquities Act overreach. Each monument is more than 1.3 million acres.”

“Historically, the Act calls for the President to designate the ‘smallest area compatible with proper care and management of the objects to be protected,'” said Secretary Ryan Zinke. “Despite this clear directive ‘smallest area’ has become the exception and not the rule. Under the President’s leadership, I will work with local, state and Tribal governments to review monument designations made the past 20 years and make sure they work for the local communities.”

“This Executive Order is unnecessary,” responded Hawai‘i U.S. Senator Brian Schatz, “and I believe that it will prove to be a waste of federal resources because the expansion of the Papahānaumokuākea Marine National Monument had widespread support from the public and from Hawai‘i’s political leaders. The views of Native Hawaiians, Hawai‘i residents, Kaua‘i’s fishermen, the commercial longline fleet, and scientists were all carefully considered before expanding the boundaries which were first laid out in President Bush’s Executive Order that created the PMNM in 2006.”

The Democratic senator from Hawai‘i said the proclamation expanding Papahānaumokuākea accounted for many interests:

“Although unneeded, I am confident review will show we did the right thing the right way,” Sen. Schatz said. 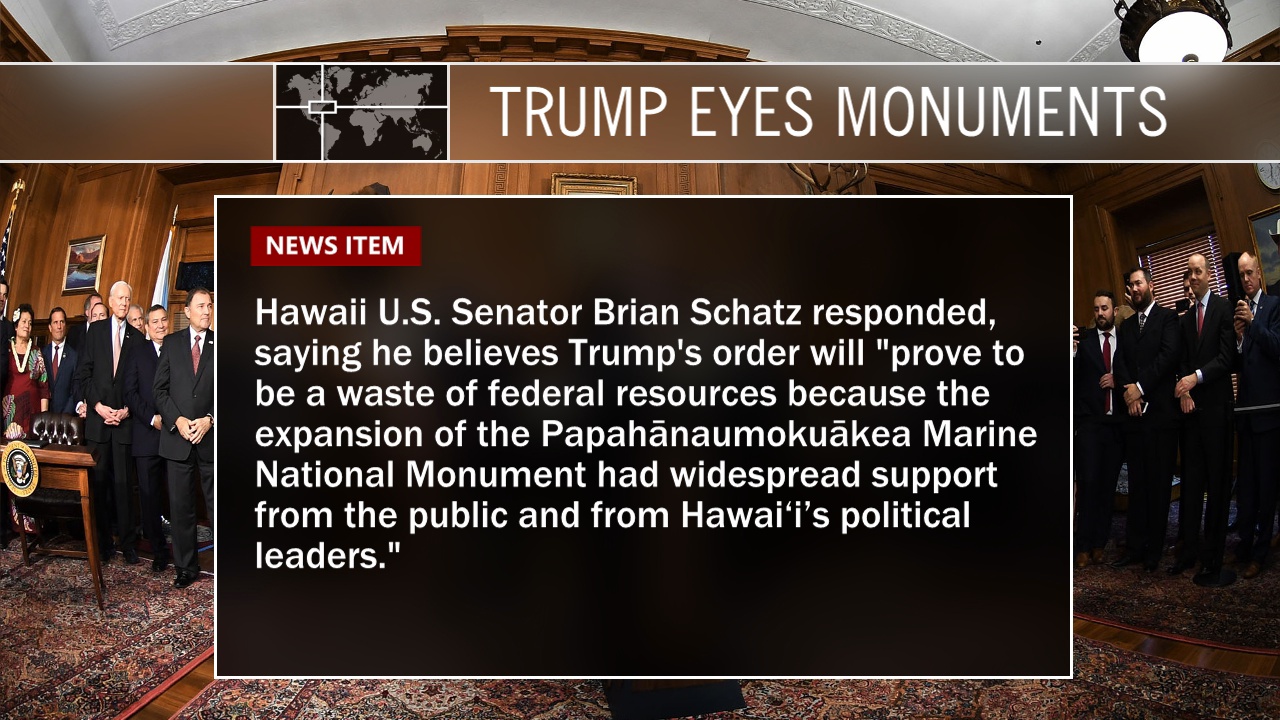