WASHINGTON D.C. (BIVN) - The Trump administration and the Democratic Party have very different opinions on how successful the president's first 100 days have been. 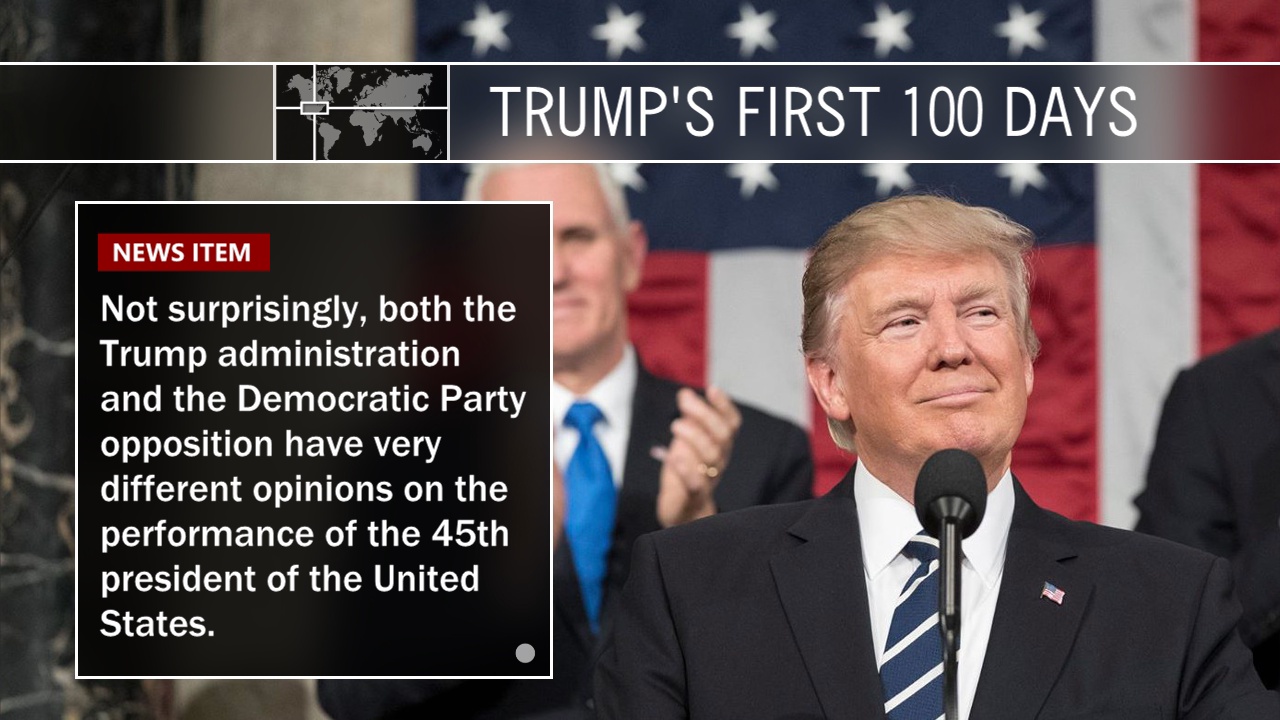 WASHINGTON D.C. – On April 29, the Donald Trump presidency hits the 100 day mark. In American politics, its considered an important milestone for judging an administration’s efficacy and accomplishments.

Not surprisingly, both the Trump administration and the Democratic Party opposition have very different opinions on the performance of the 45th president of the United States.

On the eve of the 100th day, President Trump and Hawaii Senator Brian Schatz pontificated in separate videos. In his weekly video message, Trump said his first 100 days “has been just about the most successful in our country’s history,” while Sen. Schatz began the Weekly Democratic Address by saying “it was unlike anything anyone has ever seen before.”

From day one, Schatz has been opposing Trump’s various executive orders and cabinet nominations, taking the administration to task on both policy and procedure.

“The American people expect bipartisan compromise from the President and the Congress,” Schatz said in the message. “But unless the President changes his approach and reaches out to the Democrats, the next 100 days will be just like the first: a series of broken promises to the families of America.”

In his speech, Schatz outlined the “broken promise after broken promise President Trump made to the American people,” according to the news release announcing the Democratic Address, and “how he has not only failed to improve life for America’s working families but has made things worse.”

But Trump appears to see things differently. “Since my inauguration, economic confidence has soared, reaching higher than any time in 9 years,” Trump said in his weekly video message, adding that “optimism among manufacturers is at a record high. And small business confidence has seen its largest increase in nearly four decades.”

“Perhaps the greatest change of all is the renewal of the American Spirit,” Trump said.

According to a special section of the White House website devoted to Trump’s first 100 days, the President “has taken bold action to restore prosperity, keep Americans safe and secure, and hold government accountable. At an historic pace, this President has enacted more legislation and signed more executive orders than any other president in over a half century.”

The White House and the Democrats also produced separate mash-up videos to further their arguments:


Here are the transcripts from the weekly addresses by Trump and Schatz.

I truly believe that the first 100 days of my Administration has been just about the most successful in our country’s history.

Our country is going up and its going up fast. Our companies are doing better they just announced fantastic profits all because of what’s happened in this rather short period of time. And that’s just the beginning. We’re putting in a massive tax cut for the middle class and for business. Its going to have an enormous effect.

The massive Keystone Pipeline, the Dakota Pipeline. Tens of thousands of jobs right there. And so many other businesses. We’re really proud of what we’re doing.

The F-35 fighter jet program it was way over budget. I’ve saved 725 million dollars plus, just by getting involved in the negotiation. We’re cutting costs, and were going to have a truly competitive and great country again.

In just 14 weeks, my administration has brought profound change to Washington.

The most fundamental change can be found in the relationship between the people and their government. For too long, politicians cared more about special interests than they did about a very successful future for all Americans. They took our taxpayers money, and sent their jobs and wealth to other countries.

Not anymore. From the first day of my administration, I have governed by a simple idea: My only allegiance is to you, our wonderful citizens.

Together we are seeing that great achievements are possible when we put American People first.

That is why I withdrew the United States from the Trans-Pacific Partnership. That day was a turning point for our nation. It put the countries of this world on notice that the sellout of the American worker was over.

In the following weeks, I took unprecedented actions to reverse Federal overreach and unleash job creation. We have slashed burdensome regulations, and imposed a policy that for each new regulation, two regulations must be erased

We’ve done it all while moving quickly to restore the most basic protection for all citizens, the rule of law. A truly great judge, Neil Gorsuch, now sits on the United States Supreme Court. Justice Gorsuch is deeply devoted to our Constitution. My Administration is the first in the modern political era to confirm a new Supreme Court Justice in the first 100 days the last time it happened was 136 years ago in 1881.

Defending the rule of law is a priority, not just in the courts, but also on the streets and on the border. We’ve told the incredible police of our nation that they have our full support as they work to bring down violent crime rates. We’ve taken bold action to go after criminal cartels, and made it a top priority to prosecute anyone who targets law enforcement.

This has been the work of my administration fighting for the American worker, defending the rule of law, and returning the power to the American people.

Since my inauguration, economic confidence has soared, reaching higher than any time in 9 years. Optimism among manufacturers is at a record high. And small business confidence has seen its largest increase in nearly four decades.

Perhaps the greatest change of all is the renewal of the American Spirit. As long as we have faith in each other, and trust in God, then the sun will always shine on our very Glorious Republic.

Thank you, God Bless You, and God Bless America.from the books.

“This week marked the first 100 days of Donald Trump’s presidency, and it was unlike anything anyone has ever seen before. From the nominations of unqualified cabinet secretaries like Betsy DeVos and Scott Pruitt, to the failed attempt at banning Muslim refugees from our country, this administration and this Congress have governed with cruelty and have broken every promise they made to the American people.

“During the campaign, we heard the President promise he would keep jobs here at home, buy and hire American, and hold countries like China accountable for their unfair trade practices. But as President, Donald Trump has proposed deep cuts to job training programs, refused to label China a currency manipulator, and has done nothing to stop companies from outsourcing jobs.

“As a candidate, Donald Trump promised time and time again to “drain the swamp.” But he has filled the swamp in his first 100 days. He has done the opposite, filling his administration with lobbyists and friends. And his conflicts of interests and the ongoing investigation into his Russian ties continue to cast a shadow over his Administration and its policies.

“President Trump made a lot of promises to make life better for working- and middle-class Americans. But when he proposed his first budget, it was clear his priorities are making life better for the rich, not for every day Americans.

“The American people expect bipartisan compromise from the President and the Congress. But unless the President changes his approach and reaches out to the Democrats, the next 100 days will be just like the first: a series of broken promises to the families of America.”