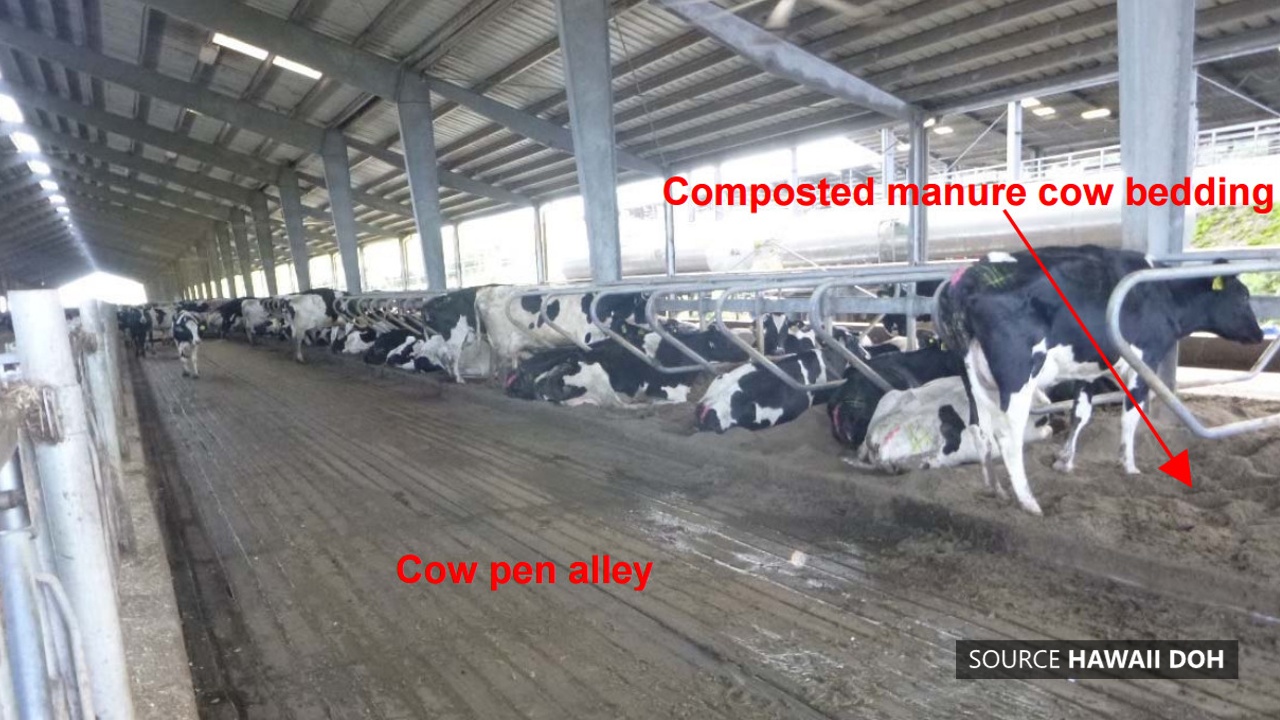 O'OKALA - Kupale Ookala and the Center for Food Safety say they are taking Big Island Dairy LLC to court for allegedly violating the Clean Water Act.

(BIVN) – Community concerns over a growing dairy operation in ʻŌʻōkala are heading to court.

In a media release issued today, the Hawaii Center for Food Safety announced they are joining with Kupale Ookala to take Big Island Dairy to court for allegedly polluting the waters around the Hāmākua coast village.

OOKALA, HAWAII — Community groups Kupale Ookala and the Center for Food Safety will take to court a polluting megadairy on Hawai‘i’s Big Island for endangering local waterways with massive amounts of manure waste. The groups notified Big Island Dairy LLC, a large concentrated animal feeding operation (CAFO), that they intend to sue the corporation for violating the federal Clean Water Act by illegally polluting streams and ocean waters. In their notice, the groups claim that Big Island Dairy’s improper manure management and storage practices have caused, and continue to cause, discharges of liquid and solid manure into streams flowing into the Pacific Ocean.

“The residents of Ookala were disappointed that the State Department of Health and Department of Agriculture didn’t take action in 2014 when reports from an investigation clearly showed wrongdoing by the Big Island Dairy. Our community is standing strong and we want to be in the driver’s seat so we can hold this polluter accountable and protect our community,” said Charlene Nishida, member of the community group Kupale Ookala.

Big Island Dairy confines nearly 2,000 cows on fewer than 2,500 acres uphill from Ookala, northwest of Hilo, HI. All of its animal waste is supposed to be stored and used onsite, including storage in open-air waste lagoons and sprayed as liquid manure on its crop fields. Residents of Ookala have observed the dairy spraying liquid manure on its crop fields during high wind days, or immediately before or during rainfall, leading to increased spillage and pollution drift. The local community has also witnessed brown murky water smelling of animal feces, which has been shown to contain high levels of dangerous bacteria, flowing from the dairy into the community’s waterways, and ultimately into the Pacific Ocean.

“So-called industrial solutions do not make sense for our fragile island ecosystem or for promoting Hawai‘i’s food self-sufficiency. Intensive confined animal operations like Big Island Dairy have devastating environmental and human health impacts, and our local communities unfairly must bear the brunt of those harms,” said Dr. Ashley Lukens, Director of the Hawai‘i Center for Food Safety.

In 2014, inspectors from the Hawaii Department of Health confirmed manure runoff from the dairy had discharged into local streams, but no fines were issued. In a December 2016 inspection report, the Department noted that the dairy’s lagoon systems were poorly maintained and found that there was “a high potential” of discharge. Any unpermitted discharge from Big Island Dairy would violate state and federal water pollution laws.

“The Clean Water Act prohibits Big Island Dairy from releasing animal waste pollution,” said Sylvia Wu of the Center for Food Safety and attorney for the groups. “These laws and regulations are in place to protect our communities and waterways, and it is time for the Big Island Dairy to play by the rules.”

“Big Island Dairy’s pollution is akin to dairies that wantonly discharged manure decades ago on the mainland,” said Charlie Tebbutt, attorney for the groups. “The Clean Water Act provides communities such as Ookala the means to protect themselves. It is long past time for this illegal pollution to cease.”

The community groups intend to take the dairy to court after the 60-day notice period required by the Clean Water Act. They are jointly represented by the Law Offices of Charlie Tebbutt and the Center for Food Safety.

Hāmākua resident Koohan Paik is also spreading the work about the Malama Hamakua Facebook group, which is focusing on the ʻŌʻōkala dairy issue. Paik said the group will help members “to learn about simple actions to take to stop the heavily polluting Ookala dairy from violating the Clean Water Act… to learn about a possible connection between the population explosion of semi-slugs in Ookala and the dairy,” and to “learn how the people of Ookala are challenging the dairy that is producing raw sewage run-off into people’s homes, down the gulches, into the groundwater and over the pali.”