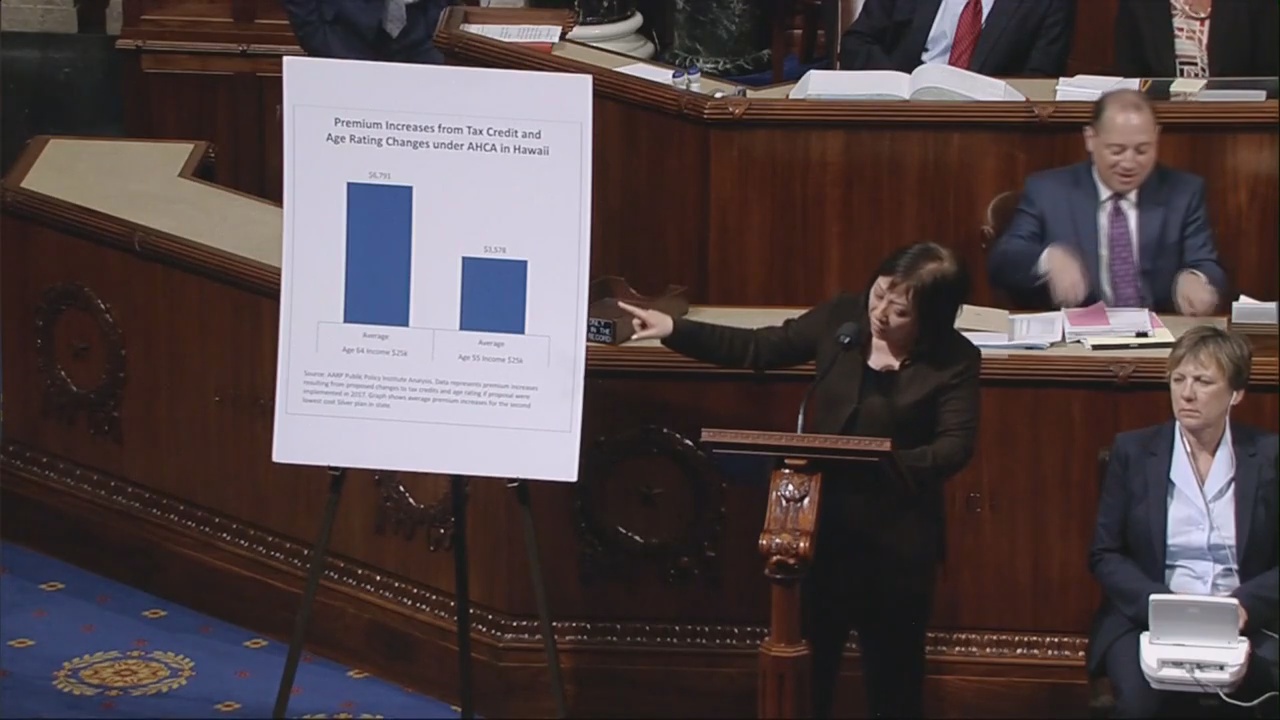 WASHINGTON D.C. - The U.S. House of Representatives passed the American Health Care Act today, the first step in fulfilling the president's promise to repeal and replace the Affordable Care Act.

(BIVN) – With just one vote over the 216 needed, the House of Representatives today passed the Republican plan to replace Obamacare, an acheivement for Speaker Paul Ryan and the Donald Trump presidency that seemed just out of reach a few weeks ago.

“This bill … delivers on the promises we have made to the American people,” Speaker Ryan said on the floor of the House in the moments before the vote. “Yes, many of us have been waiting seven years to cast this vote. But many of us are here because we pledged to cast this very vote. To repeal and replace Obamacare. To rescue people from this collapsing law.”

Democrats – including Hawaii Congresswoman Colleen Hanabusa – took to the floor to decry the GOP’s American Health Care Act (which they call Trumpcare) in vain.

The House erupted in cheers after the 217 to 213 vote was cast. Republicans taunted ‘hey hey hey goodbye’ after the win.

“The bill that passed today is not a healthcare bill — it’s a big handout to insurance and pharmaceutical companies,” Rep. Gabbard stated in a media release. “This bill slashes $880 billion from Medicaid, strips away health benefits like maternity care, substance abuse treatment, and mental health services, expands a crippling age tax on our seniors, eliminates healthcare tax credits for over 7 million veterans, and breaks the bank for those with pre-existing conditions. While corporations rake in over $600 billion in tax breaks, many low-income Americans will see their coverage drop completely. This partisan bill was rushed through, resulting in corporate benefits on the backs of the people.”

After the victory at the House, Republican lawmakers rallied around Trump and Vice President Mike Pence outside at the White House, making speeches and congratulating eachother.


President Trump said, “we have an amazing group of people standing behind me. They worked so hard and they worked so long. And when I said, let’s do this, let’s go out, just short little shots for each one of us and let’s say how good this plan is — we don’t have to talk about this unbelievable victory — wasn’t it unbelievable? So we don’t have to say it again. But it’s going to be an unbelievable victory, actually, when we get it through the Senate.”

Hawaii’s Democratic Senators are already gearing up for the fight ahead.

“House Republicans rammed through a bill that would strip at least 24 million Americans of their health care and raise the costs for those with pre-existing conditions,” said Sen. Brian Schatz. “It’s shameful and immoral. But it can stop here. The Senate has the opportunity to walk away from Trumpcare and instead work in a bipartisan way to improve people’s health care, not take it away.”

“Today, I’m thinking of the thousands of Hawaii residents I’ve heard from who are living in fear of losing their insurance and other protections they’ve received thanks to the Affordable Care Act,” said Sen. Mazie Hirono. “Constituents like Kathryn, a teacher and single parent, who is afraid of losing her insurance because of a preexisting condition; and Anne, who gave birth to a healthy baby boy thanks to Medicaid coverage. The fight to save the Affordable Care Act in the Senate starts today. I will stand strong to ensure Trumpcare does not undermine Prepaid Health Care and Affordable Care Act protections for Hawaii families.”