HILO - President Remengesau, Jr., of the Republic of Palau delivered the keynote address in the packed Edith Kanaka'ole Stadium.

(BIVN) – The University of Hawaii at Hilo livestreamed the spring commencement held on Saturday, May 13, including a speech by the president of the Republic of Palau.

For the first time, the university awarded master’s degrees in a Heritage Management program at UH-Hilo.

Another first: graduates wore a red kihei, a Hawaiian cloak worn over one shoulder. “We introduced this at the request of student government,” announced UH-Hilo Chancellor Donald Straney, “and we want to thank them for their idea.”

According to the university, 591 students have petitioned for degrees and/or certificates from the colleges of Arts and Sciences, 28 students from Agriculture, Forestry and Natural Resource Management, 52 from Business and Economics, 153 from Pharmacy, 40 from Ka Haka `Ula O Ke`elikōlani College of Hawaiian Language and 25 others for various post-graduate honors.

The President of Palau, Tommy Esang Remengesau, Jr., (as well as proud father of two UH-Hilo graduates) delivered the keynote address. Remengesau is the ninth president of the Republic of Palau and the first Palauan to be elected president four times. He also recently delivered another keynote speech in Hawaii; at the opening ceremony of the 2016 International Union for the Conservation of Nature (IUCN) World Conservation Congress in Honolulu.

“His leadership on environmental issues has earned him numerous awards and accolades,” the university wrote, “which include the International Game Fish Association’s IGFA Conservation Award in 2014 and the 2016 Peter Benchley Ocean Award for Excellence in National Stewardship for leading the historic effort to implement the Palau National Marine Sanctuary. The protected, no-take sanctuary covers 80 percent of Palau’s territorial waters and is the world’s sixth largest, fully protected marine area. Remengesau has been named one of the heroes of the environment by TIME magazine, received the Pacific Islands Environmental Leadership Awards inaugural Pacific Champion Award, The United Nations’ Champion of the Earth Award, and the Inspiring Conservation Award from the international conservation organization known as Rare.”

Karla Kapo`aiola Ahn, a Performing Arts major, was the student speaker. Ahn – a former radio broadcaster on Maui and an entertainer – is a non-traditional student.

“When I came to UH-Hilo as a student in 2010, I was lost,” Ahn said from the podium. “I had begun transitioning from a male to a female two years prior in 2008. The question I was facing then was what am I going to do in life as a woman? I didn’t want to continue the same line of work or activities I did as a man. Attending this university was one of the best decisions I have ever made,” Ahn said.

Ahn served as College of Arts and Sciences Senator for the University of Hawai`i at Hilo Student Association (UHHSA) during the 2011-2012 academic year, and is involved with the University Chorus and Kapili Choir. 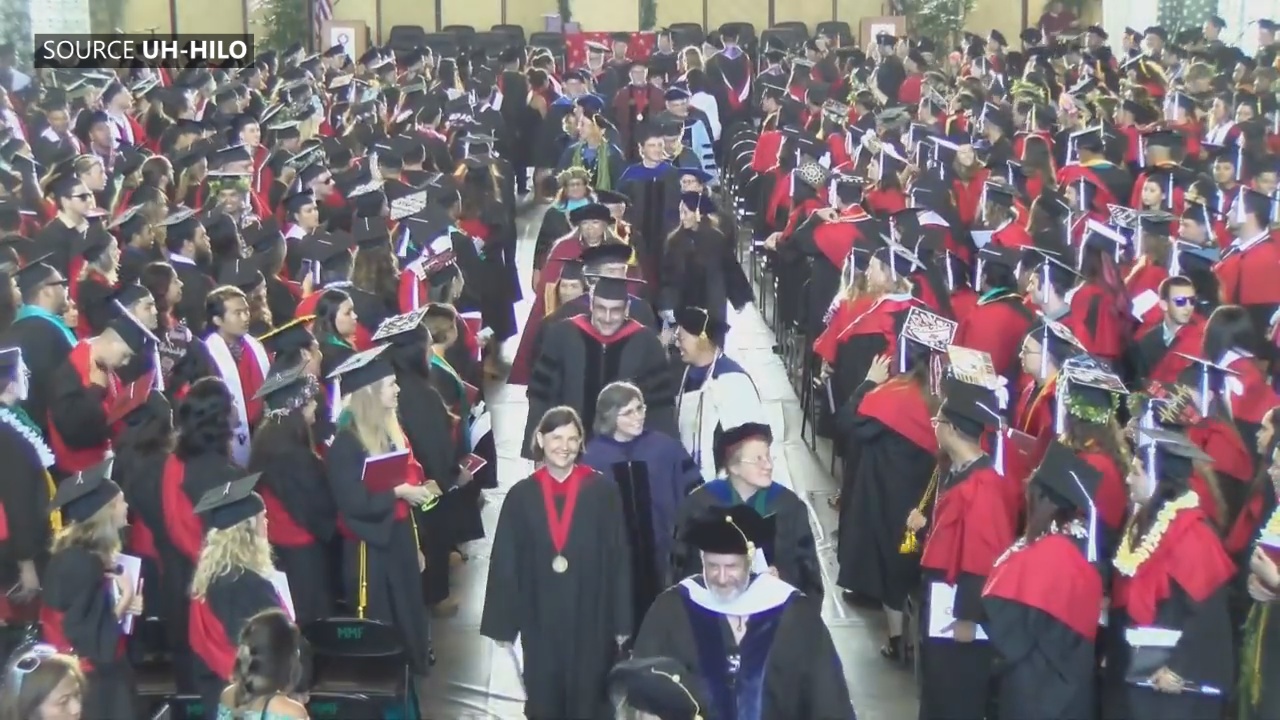