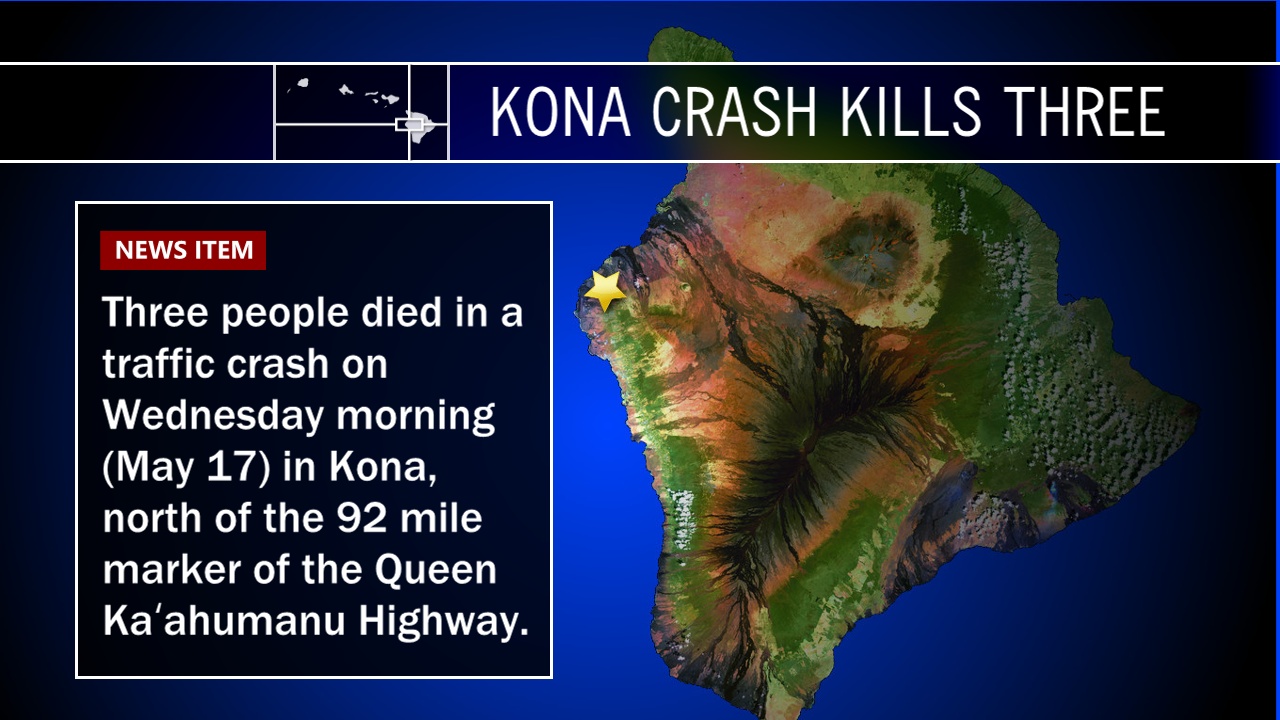 KONA - Three people died in a traffic crash Wednesday morning (May 17) in Kailua-Kona, north of the 92 mile marker of the Queen Kaʻahumanu Highway, police say.

Hawaii County Police issued an afternoon media release, saying the names of the victims are being withheld pending positive identification and notification of next of kin.

The crash, which occurred north of the 92 mile marker of the Queen Kaʻahumanu Highway at around 6:26 a.m., shut down the road in both directions and snarled traffic around Kona for hours.

Police determined “that a 1998 Toyota 4Runner operated by an unidentified male party had been passing several vehicles as he traveled North on the Queen Kaʻahumanu Highway, and as he completed his pass the operator lost control of his vehicle which caused it to veer back into the oncoming (Southbound) lane where it was then involved in a broadside collision with a 2008 Nissan Titan operated by a 37-year-old Kamuela man.”

Police say a 32-year-old female passenger of the Nissan Titan was taken to the Kona Community Hospital for treatment of her injuries of which she is currently in critical condition.

The driver and passenger of the Toyota 4Runner, and the driver of the Nissan Titan were all taken to the Kona Community Hospital where they were pronounced dead today at 12:20 p.m, 12:21 p.m, and 12:22 p.m respectively.

This is the thirteenth, fourteenth, and fifteenth traffic fatalities this year compared to ten at this time last year.

Police believe speed was a factor in the crash, but is not immediately known if alcohol was a factor. Autopsies have been order to determine the exact cause of death and to identify the parties.

Police say the Traffic Enforcement Unit has initiated a negligent homicide investigation and is asking for anyone who may have witnessed the accident to contact Officer Kimo Keliipaakaua at 326-4646 ext. 229. Tipsters who prefer to remain anonymous may call Crime Stoppers at 961-8300 in Hilo.