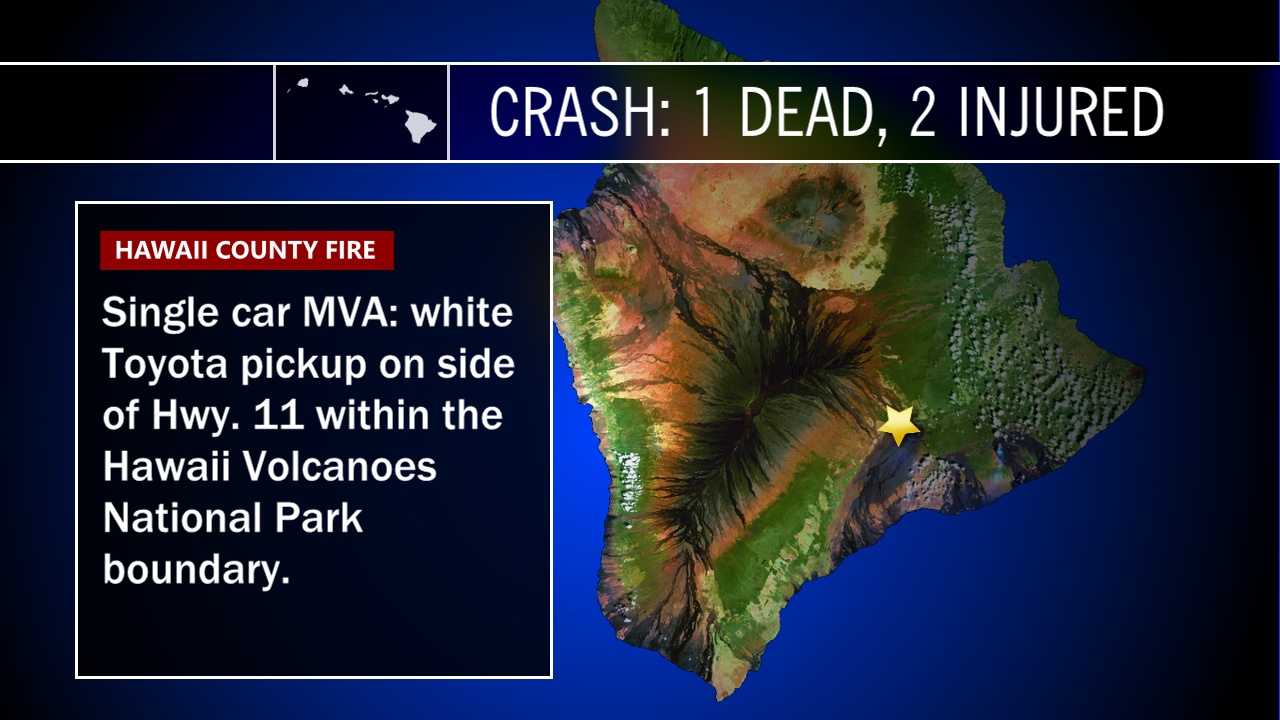 HAWAII VOLCANOES NATIONAL PARK - One person is dead after a single car motor vehicle accident on Highway 11 near the 33 mile marker.

(BIVN) – One person was killed and another two people were injured in a single car crash that occurred just before 9 p.m. on Sunday, near the 33 mile marker of Highway 11 in Volcano.

Fire crews arrived to find a white, single cab Toyota pickup on the side of the highway, within the Hawaii Volcanoes National Park boundary.

“Single car MVA noted on the road laying on the driver side,” a fire department dispatch described. “One person noted pinned under the mid section of the vehicle without signs of life. Another occupant was outside of the vehicle laying face down and not moving, complaining of pain to his legs. A third occupant self-extricated and ambulatory. No fire, no other vehicle involved roadway is open with traffic control.”

The cause of the crash is unknown, fire crews say. The incident is under investigation by National Park Rangers and the Hawaii County Police Department.

UPDATE (11 p.m. on May 29, 2017) – The National Par Service provided some additional information in a media release issued Monday.

“The vehicle, a white Toyota Tacoma truck, was traveling in the Ka‘ū-bound lane when it rolled over and ejected all three occupants,” NPS said. “A 48-year-old male passenger was found pinned beneath the truck and pronounced dead on the scene by Hawai‘i County Fire Department medics.”

“The 43-year-old male driver, a Pāhoa resident, was placed under arrest for suspicion of driving under the influence of alcohol,” the park reported. “He was transported by ambulance to Hilo Medical Center for further evaluation, and escorted by National Park law enforcement personnel. The third occupant, a 53-year-old male, was also transported to Hilo Medical Center for treatment.”

Names are being withheld pending notification of next of kin, and further investigation, federal officials say. This is the second fatal traffic accident in Hawaii Volcanoes National Park this year.