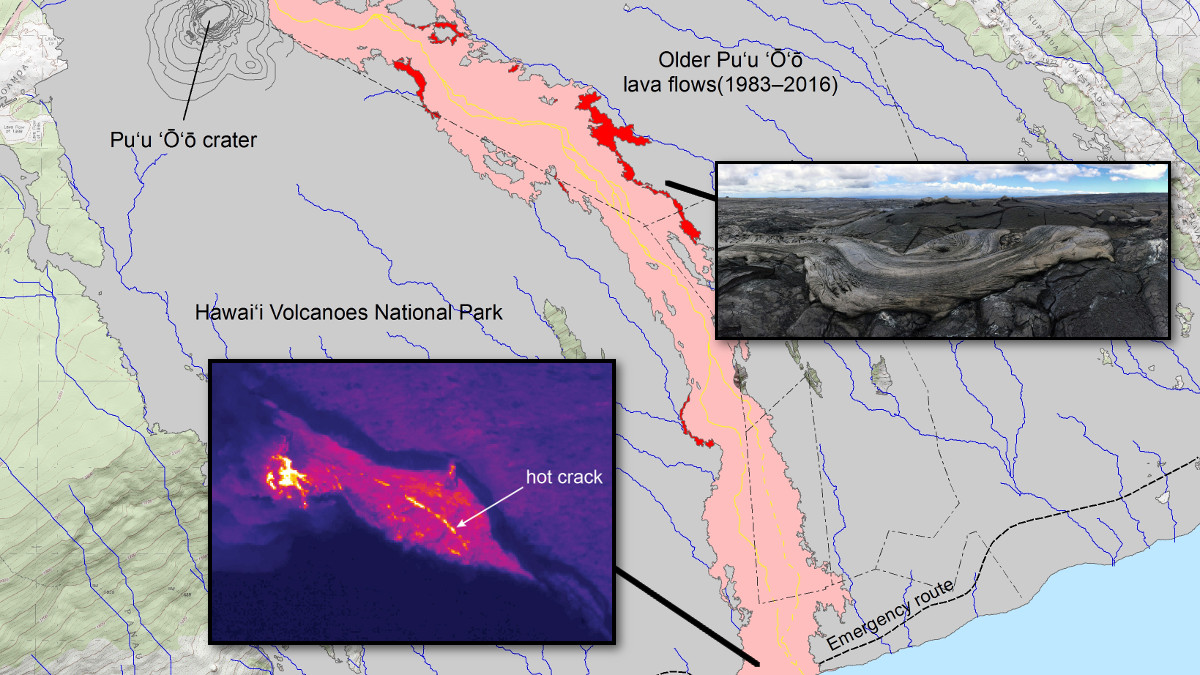 HAWAII VOLCANOES NATIONAL PARK - Thermal images show a hot crack on the delta at the Kamokuna ocean entry, and new breakout a mile from Puʻuʻōʻō was active.

(BIVN) – Scientists with the USGS Hawaiian Volcano Observatory have posted some new photos to its website, and mapped out the latest activity of the episode 61g flow.

The lava flow is still active and entering the ocean at Kamokuna. The new lava delta being formed where the lava meets the sea is approximately 3.2 acres in size, extending about 328 ft. out from the sea cliff. 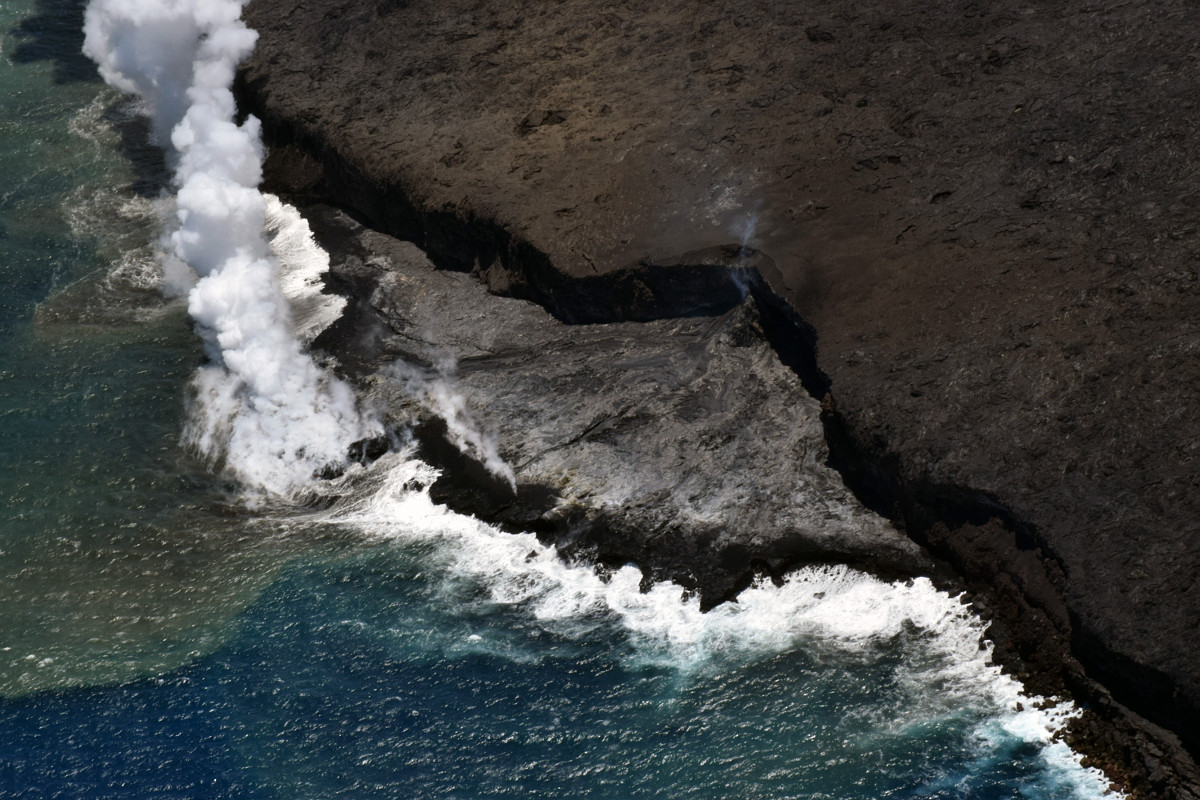 (USGS) The ocean entry remains active and continues to increase the size of the Kamokuna lava delta.

Photos from a June 21 overflight show activity concentrated towards the western side of the delta (left center in the above image), and building outward in a narrow lobe.

Scientists say that although surface flows have covered most of the delta with new lava, thermal images collected during the overflight show a hot crack on the delta. Such cracks are common on lava deltas, USGS says, and suggest sagging and instability at the front of the delta.

(USGS) Thermal images collected during the overflight on Wednesday, June 21, show a hot crack spanning much of the width of the lava delta at the Kamokuna ocean entry.

At Puʻuʻōʻō, flows continue on the upper portion of the flow field.

“On June 13 at about 6:00 am, there was a new pāhoehoe breakout along the episode 61g tube system approximately 1.1 km (0.7 miles) from the vent,” scientists wrote.

(USGS) On June 21, geologists visiting the site of the new breakout found that the ground had been cracked and uplifted about 2 m (6.6 feet) where the breakout originated (center).

“This is the closest active breakout to Pu‘u ‘Ō‘ō and the 61g vent, and also the largest on the flow field,” USGS reported. “Smaller scattered surface flows from the March 5 breakout remain active, but all lava flow activity is on the upper flow field above the pali.”

These flows do not pose any threat to nearby communities at this time, scientists say.

On June 21, USGS HVO published a new map of the flow field. 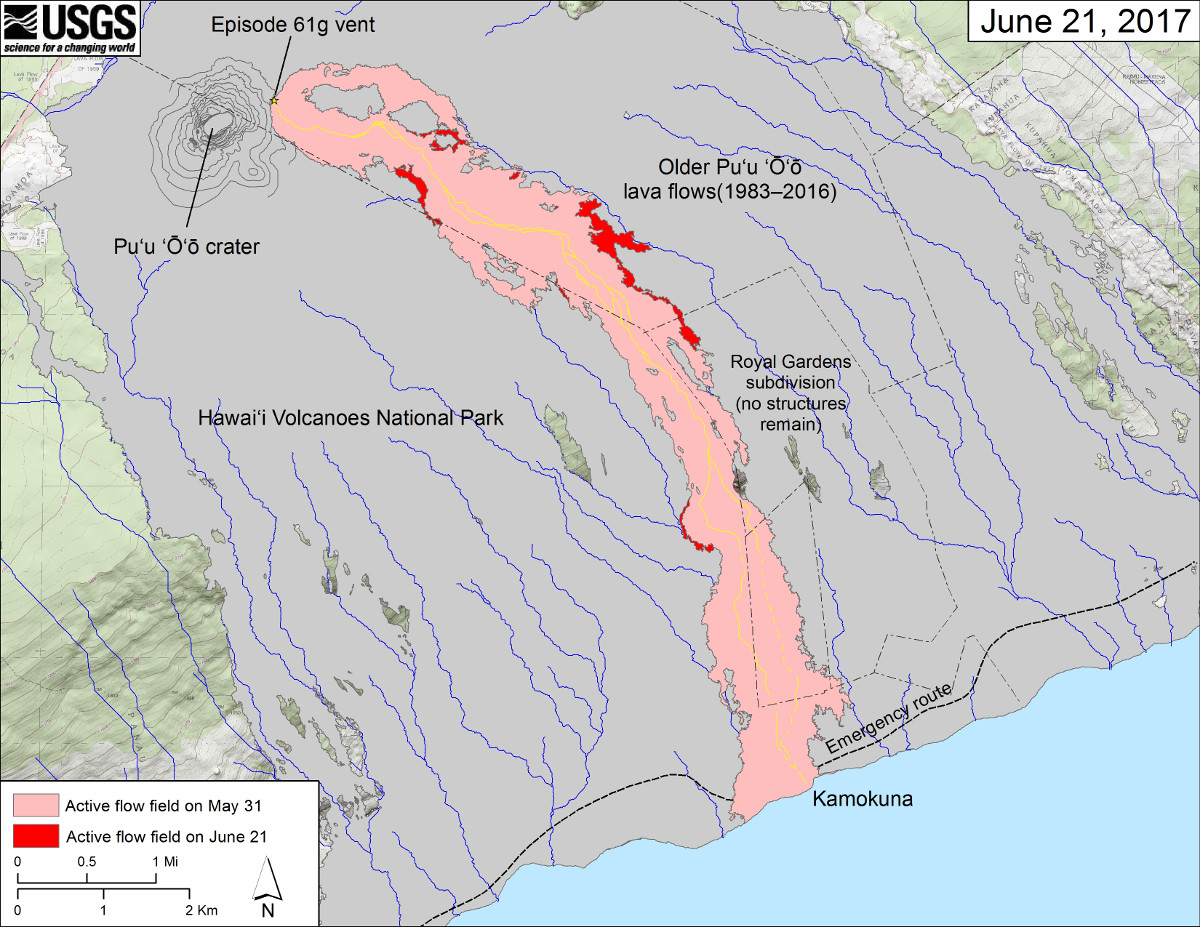