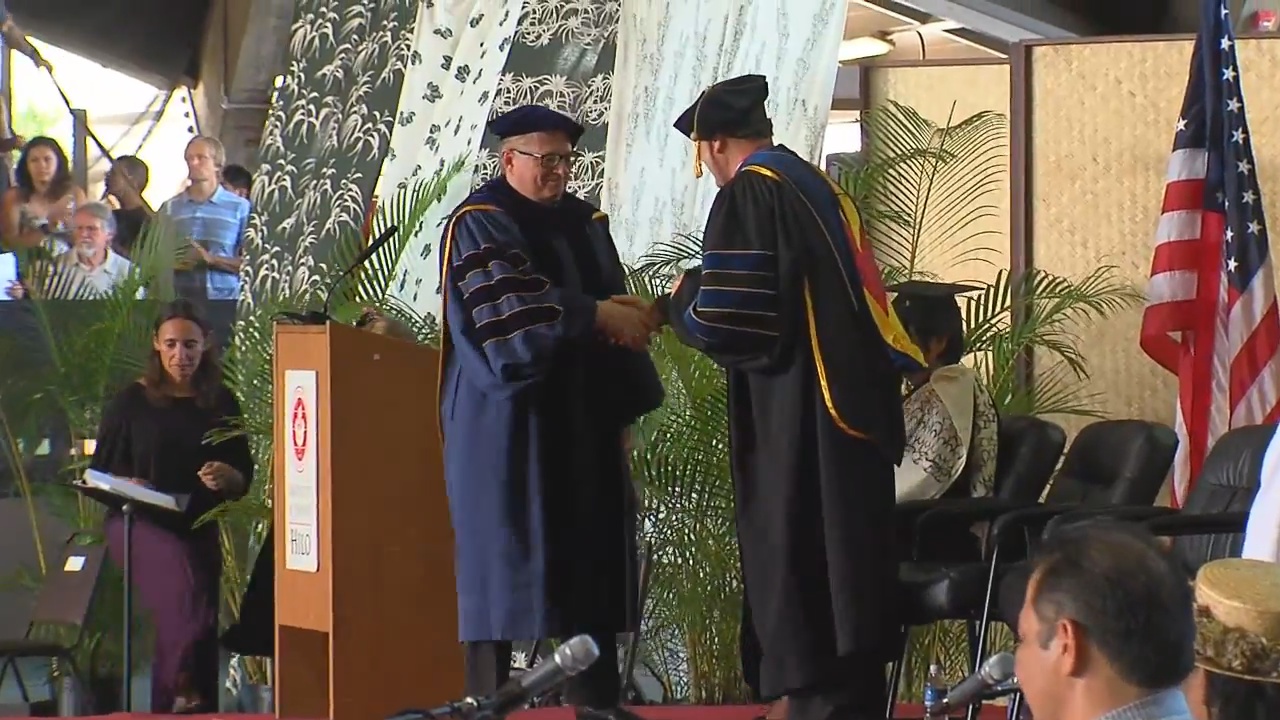 ABOVE: UH-Hilo Chancellor Donald Straney at a 2015 graduation ceremony.

HILO, Hawaii - The UH System confirms the search for a new chancellor begins this fall, on the same day the pharmacy college attains full accreditation.

(BIVN) – The University of Hawaiʻi at Hilo will soon need a new chancellor.

The University of Hawaiʻi system confirmed what has been rumored for weeks: Current chancellor Donald Straney will be leaving his position, moving to a UH Systemwide leadership role as vice president of academic planning and policy, effective August 1, 2017.

A national search for a permanent UH-Hilo chancellor will begin this fall. Marcia Sakai, UH Hilo vice chancellor for administrative affairs, will serve as interim UH Hilo chancellor during the transitional period. Both appointments are subject to Board of Regents approval at their July 20, 2017 meeting, UH officials say.

A media release issued by the UH System detailed the changes, and included statements from University of Hawaiʻi President David Lassner.

Straney has served as UH Hilo chancellor since 2010 and is credited with improving graduation rates and increasing the number of Native Hawaiian, STEM and transfer students from local community colleges. Under his leadership, the campus worked closely with local educational, agricultural and business communities to address economic, workforce and quality-of-life issues.

“Don has done an outstanding job at UH Hilo, and I know he will excel as our vice president of academic planning and policy, a position critical to the entire UH System as we continue to improve our collaborative efforts to meet the needs of the entire state,” said UH President David Lassner. “Don has 38 years of proven higher education experience on campuses and within systems, including here in Hawaiʻi.”

Sakai joined the UH Hilo faculty in 1991 after distinguished public service to the state and was promoted and tenured there. She was the founding dean of the College of Business and Economics, leading the college through its initial AACSB accreditation, and has brought her experience and ability to bear in serving as Vice Chancellor for Administrative Affairs since 2011.

“Marcia has been a highly successful faculty member, dean and senior administrator at UH Hilo,” said Lassner. “She truly understands and appreciates the university, its mission and its importance to Hilo, Hawaiʻi Island and the state.”

Straney is replacing Risa Dickson as vice president of academic planning and policy. Dickson notified UH leadership in fall 2016 of her intention to return to faculty at the end of the 2016–2017 academic year and the 2017 legislative session. She is assisting during the transition period.

“Risa has a laid a solid foundation that will allow us to move the university into the 21st century,” said Lassner. “She has accomplished so much in her time here at UH, and we thank her for all of her hard work, which will have a long-lasting impact on the university.”

The official announcement of Chancellor Straney’s departure was joined by news that, for the first time, the UH-Hilo Daniel K. Inouye College of Pharmacy has attained full accreditation from the Accreditation Council for Pharmacy Education (ACPE) for a full eight years.

Straney helped oversee the rise of the DKICP, which is presently constructing a permanent building to house the college.

DKICP was found to be “compliant” or “compliant with monitoring” in all 25 standards set by ACPE with no “partial” or “noncompliant” findings, UH officials reported. In a prior ACPE evaluation in 2015, DKICP was granted full accreditation for two years with the provision that it was “contingent on continuous progress” and monitored by ACPE, a press release stated.

According to their report, particular attention was made to the progress and changes that have occurred since the last focused on-site evaluation in fall 2014. It cited the appointment of a new dean (Carolyn Ma) as well as new chairs for each of the College’s departments.

The report to the Board noted that while research is still regarded critical activity for faculty, the College has revisited its mission and vision so that “evaluative expectations have been revised to more realistic levels.”

Other changes noted in the report include progress on construction for the College’s permanent building.

“This is affirmation of the significance of maintaining excellence in all ways at UH Hilo,” said Chancellor Straney. “As DKICP passes the 10-year anniversary as the only College of Pharmacy in the Pacific Region, we can celebrate with all stakeholders, both at the University level and in the community, to recognize their hard work that has gotten us this far.”