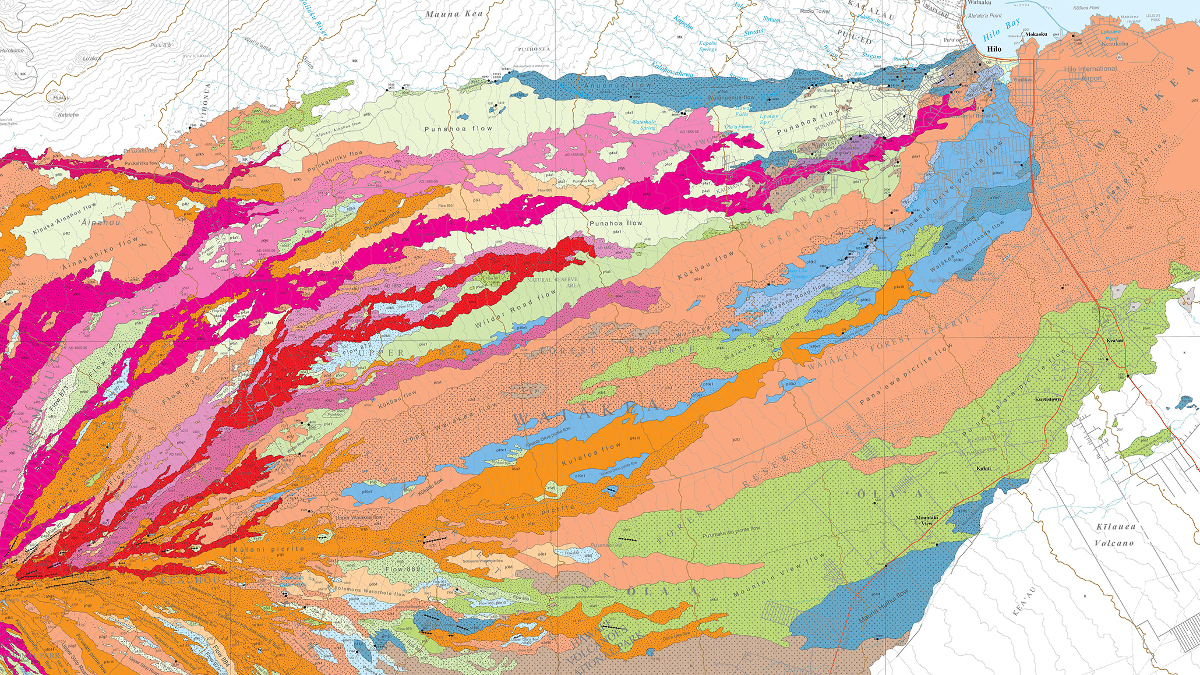 INSET of USGS “Geologic map of the northeast flank of Mauna Loa volcano, Island of Hawaiʻi”

HAWAII ISLAND - Scientists have created a detailed map of the various lava flows on the northeast flank of the world's largest volcano.

A closer look at the USGS “Geologic map of the northeast flank of Mauna Loa volcano, Island of Hawaiʻi”

(BIVN) – Scientists with the U.S. Geological Survey Hawaiian Volcano Observatory have published a new Volcano Watch article, focusing on an years-long effort to map the northeast flank of Mauna Loa, revealing the geologic history of that portion of the world’s largest volcano.

The new “Geologic map of the northeast flank of Mauna Loa volcano, Island of Hawaiʻi,” the culmination of many years of work by Hawaiian Volcano Observatory (HVO) geologists, was recently published by the U.S. Geological Survey. The work was spearheaded by John P. Lockwood (affectionately known as “Mr. Mauna Loa”), who is now retired from USGS and HVO, and Frank Trusdell, HVO’s current Mauna Loa Project geologist.

Encompassing 440 square miles (1,140 sq km) of the northeast flank of Mauna Loa, the new map comprises an area equivalent to the islands of Moloka‘i and Lāna‘i combined! The mapped area extends from an elevation of 10,880 feet (3316 m) to sea level, from Pu‘u‘ula‘ula (“Red Hill”) on the southwest to Hilo on the northeast.

Eruptive fissures and ground cracks cut volcanic deposits and flows in and near the crest of the rift zone. Lava typically flows from the NERZ to the north, east, or south, depending on vent location relative to the rift crest. For instance, during the 1880–1881 eruption of Mauna Loa, flows initially traveled south towards Kīlauea, but later, northeast towards Hilo.

Although most of the NERZ source vents are more than 19 miles (30 km) from Hilo, one branch of the 1880–1881 flow nearly reached Hilo Bay. In fact, Hilo is built entirely on lava flows erupted from the NERZ, most of them older than 1852.

The map shows the distribution of 105 eruptive units (flows)—separated into 15 age groups ranging from more than 30,000 years before present to 1984 CE—as well as the relations of volcanic and surficial sedimentary deposits. The color scheme adopted for the map is based on the age of the volcanic deposits. Warm colors (red, pink, and orange) represent deposits from recent epochs of time, while cool colors (blue and purple) represent older deposits.

From the geologic record, we can deduce several facts about the geologic history of the NERZ. For example, in the past 4,000 years, the middle to uppermost sections of the rift zone were more active than the lower section, perhaps due to buttressing (compression) of the lower northeast rift zone by the adjacent Mauna Kea and Kīlauea volcanoes.

Other interesting tidbits gleaned from the new map include: The Hāla‘i Hills near Hilo High School are 15,000- to 20,000-year-old eruptive cones from Mauna Loa, which are among the oldest geologic units found in Hilo. The lava flow at the top of Rainbow Falls is 10,000 years old! The largest flow in the map area is called the Pana‘ewa picrite, an olivine-rich lava flow that erupted from a vent near the Kūlani Correctional Facility, and which, at the coast, extends from Hā‘ena (Shipman Estate property) through Keaukaha to Mokuola (Coconut Island).

The geologic map provides fundamental information on the long-term eruptive behavior of Mauna Loa Volcano. In addition, it offers a valuable foundation from which collaborative studies in geology and biology can be launched. The map can be viewed or freely downloaded from USGS Publications. “Geologic map of the northeast flank of Mauna Loa volcano, Island of Hawaiʻi,” published by the U.S. Geological Survey in May 2017, shows the distribution of lava flows and other deposits covering an area from Pu‘u‘ula‘ula (“Red Hill”) on the southwest to Hilo on the northeast. Ages of the geologic units are indicated by color: reds and oranges are younger, blues and purples are older. The largest salmon-colored lava flow on the map is the Pana‘ewa flow, which erupted from Mauna Loa about 1,470 years ago. This USGS map is freely available at https://doi.org/10.3133/sim2932A.