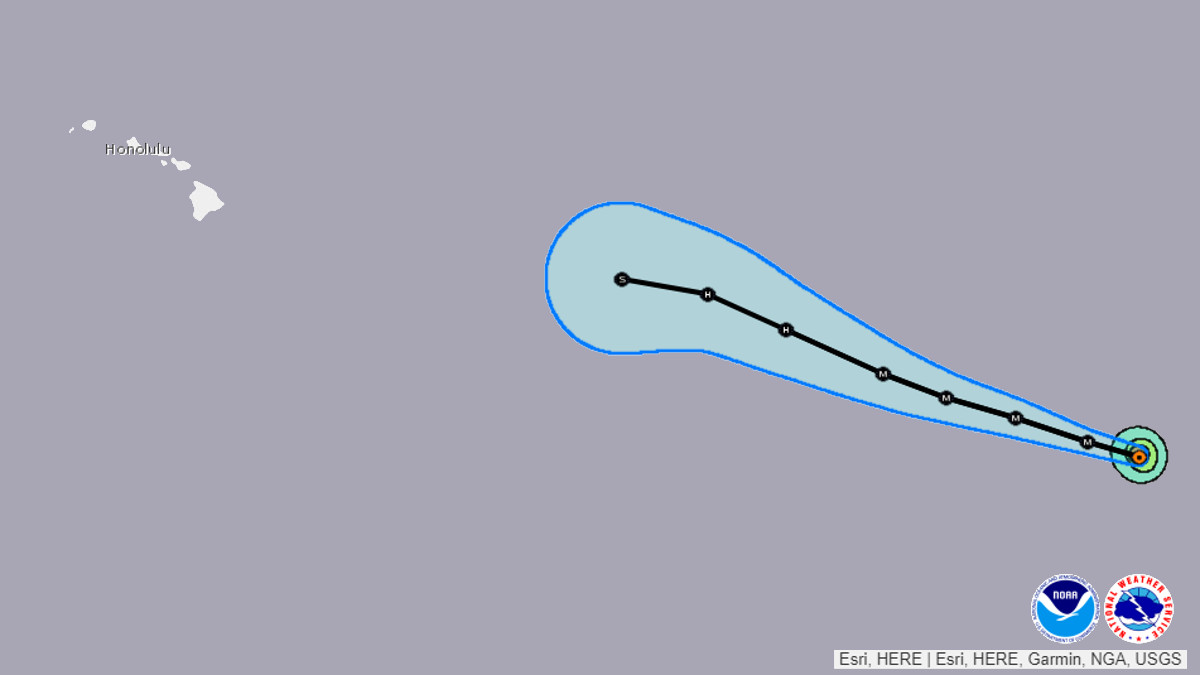 HAWAII ISLAND - Hurricane Fernanda weakened a little but could intensify again as the hurricane is is undergoing an eyewall replacement cycle.

(BIVN) – Category Four Hurricane Fernanda is 2,210 miles east southeast of Hilo and moving toward the west near 13 mph.

Fernanda has weakened a little. Maximum sustained winds are near 140 mph with higher gusts. Some fluctuations in intensity are expected during the next two days, forecasters say, but Fernanda is forecast to remain a major hurricane into early next week.

It is much too soon to determine if there will be any impacts to the state at this time other than the surf. “Wavewatch 3 guidance continues to indicate a long-period, east swell from Fernanda arriving Tuesday night or Wednesday,” the National Weather Service reports. “Current guidance indicates that advisory level surf is possible along exposed east facing shores, however, the size of this swell will be highly dependent on the eventual track and intensity of the system.”

Although the tail end of the official five day forecast shows Fernanda’s predicted northwest motion becoming more westerly towards the islands, it is also currently predicted to rapidly lose intensity and becoming a tropical storm as it moves into the Central North Pacific later next week. 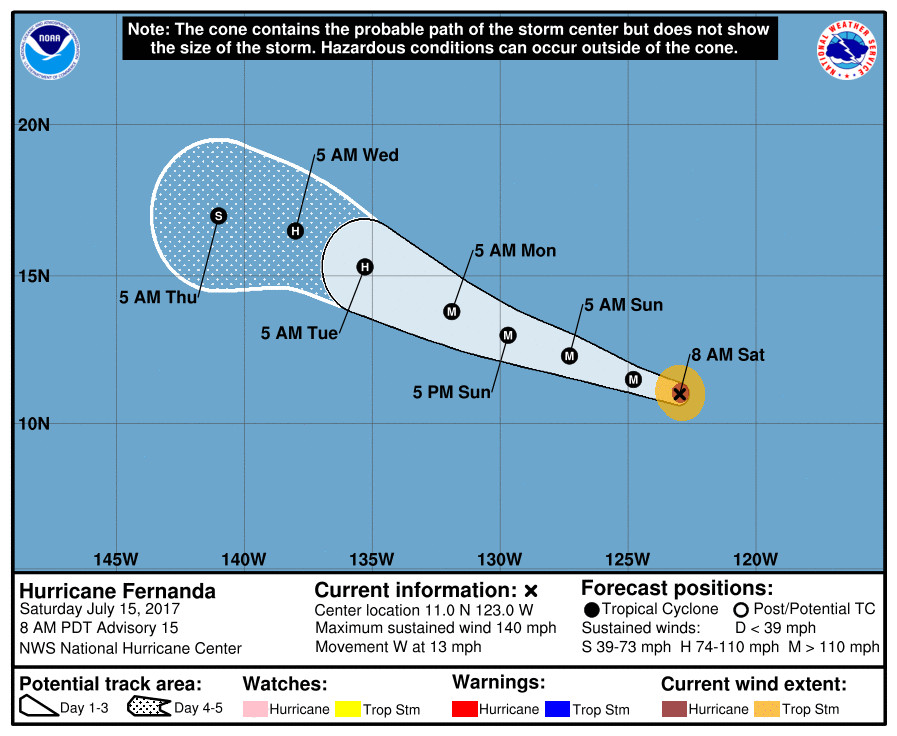 Here is the most recent discussion by the National Hurricane Center, written at 5 a.m. HST:

An AMSR2 overpass around 0925 UTC shows that Fernanda is undergoing an eyewall replacement cycle (ERC). Based on the 36 GHz composite image from that pass, the inner core at that time consisted of a very small, 10 nm-wide, inner eyewall surrounded by a 30 nm-wide outer eyewall. An earlier WindSat pass at 0149 UTC suggests that the ERC began about 12 hours ago. This is consistent with a warming trend observed in the cloud top temperatures that began a little before 0000 UTC yesterday. The initial intensity has been decreased to 120 kt, based on a blend of Dvorak estimates from TAFB, SAB, and the UW-CIMSS ADT.

Assuming a typical ERC weakening period of about 15 hours, the hurricane could reintensify later today, once the outer eyewall contracts. The environment should support intensification for another 24 hours or so, and the forecast reflects this. Additional ERCs could lead to fluctuations in intensity that aren’t explicitly shown in the forecast. After about 36 hours, the hurricane will become embedded in a drier and more stable environment, so steady weakening is anticipated. The new forecast is similar to the previous one, despite the weaker initial intensity, and is above most of the intensity guidance for the first 36 hours. It is close to the intensity consensus by the end of the forecast period.

Fernanda is beginning to make a long-anticipated turn toward the west-northwest and the initial motion is now just north of due west, or 275/11. Almost no change has been made to the track forecast, which remains on top of the various multi-model consensus aids. A west-northwest to northwest motion is expected for the next several days while the cyclone moves along the southwestern periphery of a deep-layer ridge. The track guidance is still tightly clustered, and confidence remains high in the track forecast.