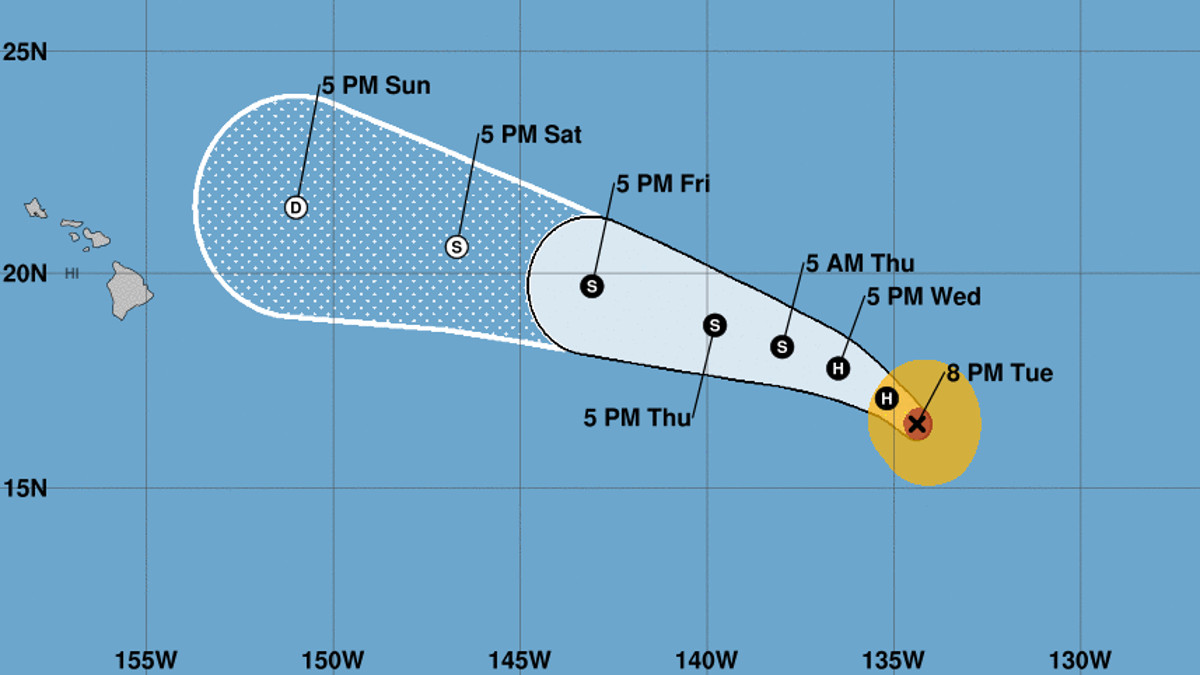 PACIFIC OCEAN - Fernanda is still a Category 2 hurricane, after an unexpected strengthening Tuesday. However, the storm is still expected to weaken before nearing Hawaii.

Maximum sustained winds have decreased to near 100 mph (155 km/h) with higher gusts, forecasters say, and continued weakening is expected during the next couple of days.

Fernanda surprised the weather experts when it intensified somewhat earlier this afternoon. The storm made a “small comeback”, forecasters reported at 11 a.m. HST, “as its eye has become distinct in the visible satellite imagery in the midst of a ragged ring of very cold cloud tops.” However, the hurricane is still lose steam with a turn toward the west-northwest on Wednesday.

The five-day forecast shows Fernanda weakening to a depression as it nears Hawaii early next week. 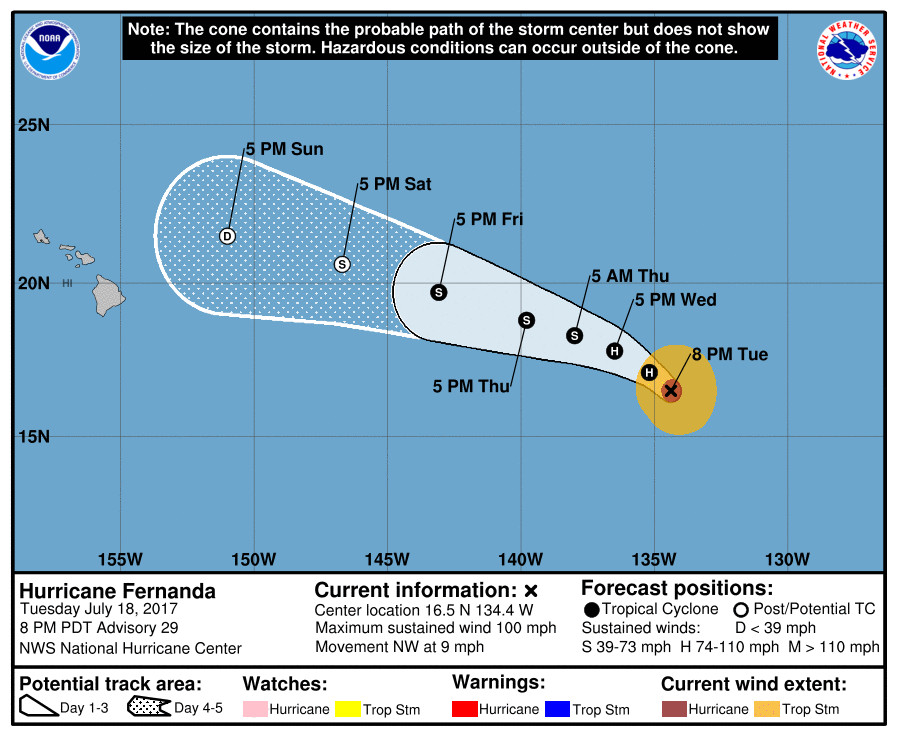 “Fernanda is forecast to become a remnant low about 500 miles east of the Big Island on Saturday,” the National Weather Service stated on Tuesday afternoon. “Since Fernanda is still far from the islands, and since the global models show some significant differences, it is not yet clear what impact the system may have on the Hawaiian Islands.”

“An east swell from Hurricane Fernanda has been slow to arrive in the islands, but is expected to build through the week,” the Honolulu forecasters wrote. “The size of this swell will be dependent on the exact track and intensity of Fernanda.”

A swell from Fernanda could enhance the effects of the King Tides phenomenon predicted for this weekend.

“The largest high tides of the month (king tides) will be occurring during the afternoons and evenings for the next several days,” the NWS Honolulu said. “The highest tides in most areas will be on Saturday. The high tides and the swell from Fernanda could combine to produce coastal flooding in some areas.”

Here is the Fernanda discussion at 5 p.m. HST:

Enhanced Infrared BD-curve GOES-15 imagery indicates considerable cooling of the eye this evening. In fact, the eye has cooled nearly 30 degrees C during the past 6 hours, and is no longer visible in conventional imagery. A blend of Dvorak satellite intensity estimates from TAFB and SAB yields an initial intensity of 85 kt for this advisory. The cyclone should continue on a steady weakening trend during the next 48 hours as it traverses decreasing oceanic SSTs and moves into a more thermodynamically stable air mass. Toward the end of the forecast period, increasing southwesterly shear associated with a developing cut-off low north of the Hawaiian Islands is expected to further support a gradual spin-down of Fernanda. The NHC intensity forecast reflects weakening to a post-tropical cyclone in 4 days, and further degenerating to a remnant low at day-5. The forecast is again based primarily on the IVCN consensus model.

The initial motion is estimated to be northwestward, or 310/8 kt. The NHC forecast track philosophy remains unchanged for this advisory. Fernanda is expected to turn toward the west-northwest during the next 24 hours and continue on that general heading through day 5 in response to a subtropical ridge reestablishing to the northeast of the Hawaiian Islands. The official forecast has been adjusted slightly to the right of the previous advisory and lies close to the HFIP Corrected Consensus (HCCA), and the GFS/ECMWF (GFEX) model blend. 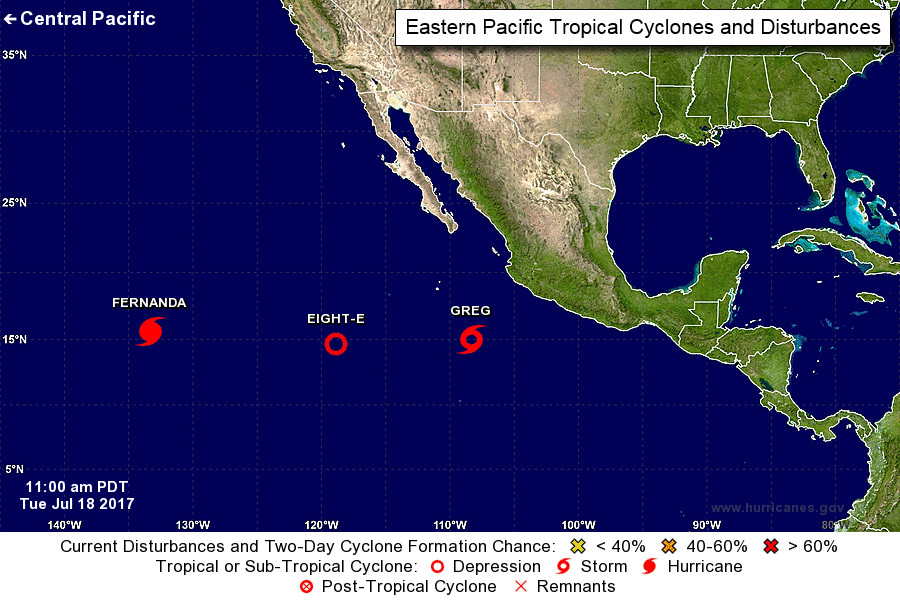 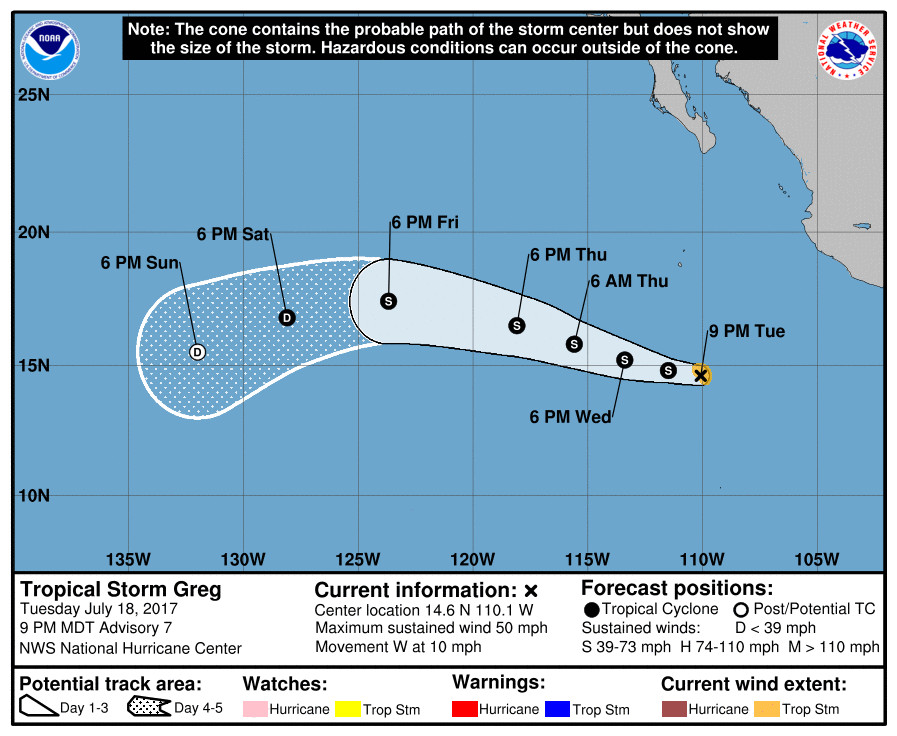 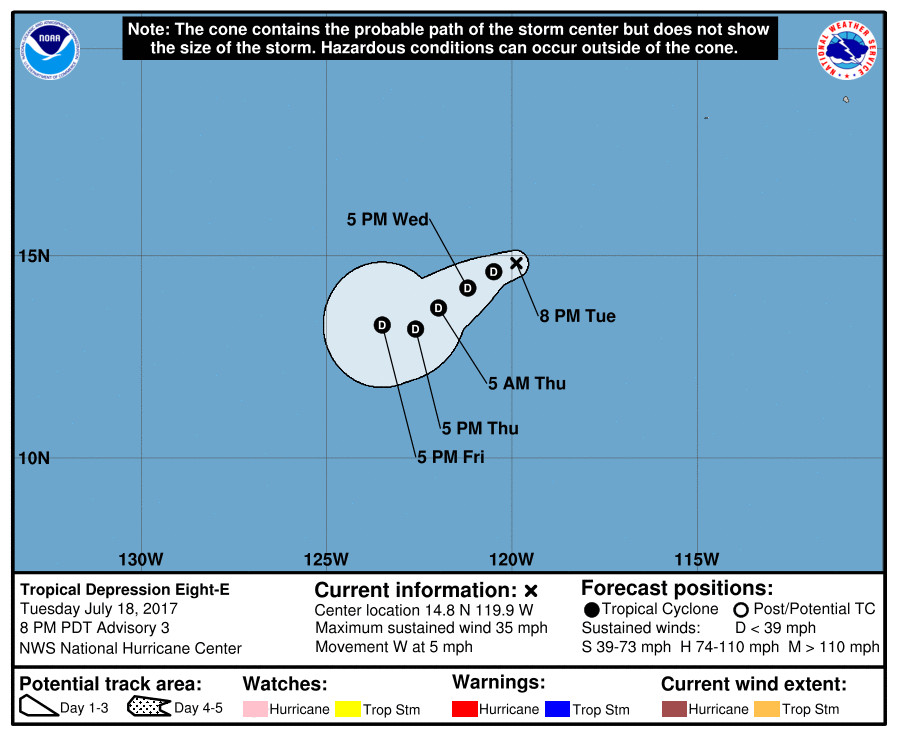