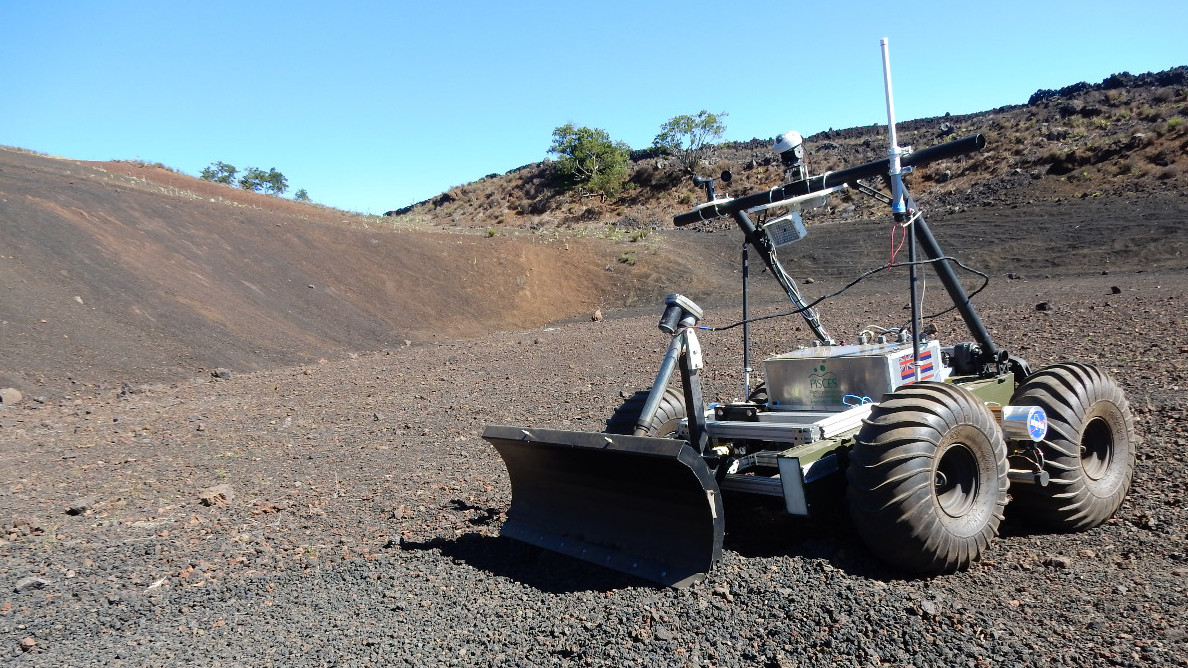 (BIVN) – The Pacific International Space Center for Exploration Systems, or PISCES, and Honeybee Robotics, Ltd. are on the receiving end of a $118,690 grant from NASA.

From the PISCES and State Department of Business, Economic Development and Tourism media release:

ISRU takes raw, natively sourced materials and converts them into usable resources. On places like the Moon and Mars, ISRU can transform regolith (or surface soil) into critical necessities like oxygen, water, rocket fuel and construction materials.

PISCES and Honeybee Robotics have partnered on the 12-month ISRU project to design and develop an automated construction process that creates building blocks made entirely of sintered Hawaiian basalt. Since Hawaii’s basalt closely resembles Martian and lunar regolith in chemical composition and appearance, the blocks will have applications both on Earth and in space. ISRU basalt materials could enable the construction of habitats, tools, shelters, roads, landing pads and other critical infrastructure required for space settlement. Basalt building blocks could also provide a sustainable new construction material for the State of Hawaii in place of imported cement.

Through the STTR grant, PISCES is currently investigating the ideal sintering temperature to create these building blocks with an optimal balance of strength and volume. Honeybee Robotics is designing a robotic process for creating and/or deploying the blocks to automate the ISRU construction process. The Brooklyn-based company designs, builds and integrates technologies for a range of challenging environments including space exploration. It has contributed sample acquisition and processing tools for NASA rovers currently exploring Mars.

“We are excited to be working with Honeybee Robotics again on this NASA STTR project,” said PISCES Program Manager, Rodrigo Romo. “Honeybee was a key partner in our robotically built launch and landing pad that we constructed using only local basalt materials. This grant award will take the process a step further, allowing us to optimize the building block design and construction materials to allow for both vertical and horizontal construction applications that can be used both on Earth and on other celestial bodies for space settlement.”

“Hawaiian basalt is a great analog to the challenging environments we are likely to find on Mars or the Moon, where autonomous ISRU systems will need to work reliably and autonomously in tough conditions,” said Kris Zacny, vice president of the Exploration Technology Group at Honeybee Robotics. “Using local resources will be critical to enable new mission architectures by harvesting materials from the planet as needed. Also, approaches we develop for ISRU can also have applications in space mining, opening doors for both exploration and commercial missions. That’s why we’re so excited to be working with PISCES to advance our experience and robotic technologies.”

The STTR-funded project is Phase I in the development for planetary building blocks. If successful, PISCES and Honeybee Robotics will solicit a proposal for a Phase II STTR award which provides funding awards up to $1 million over two years.