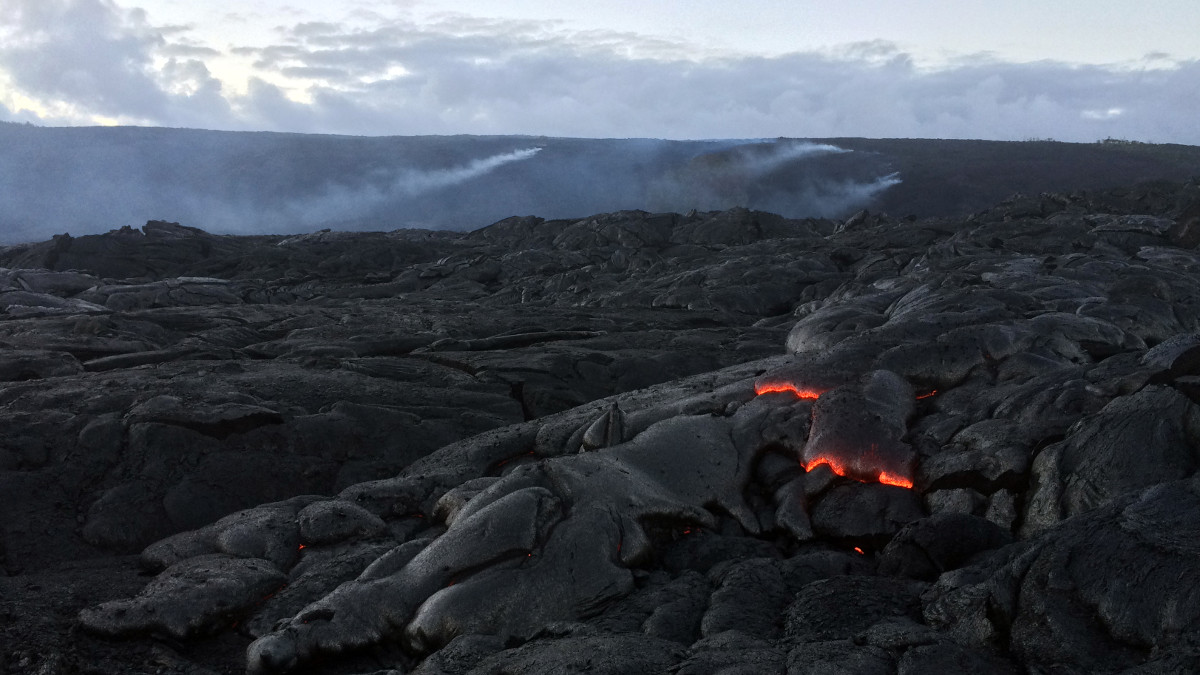 Scattered breakouts on the coastal plain, photo by USGS

HAWAII VOLCANOES NATIONAL PARK - In this week's Volcano Watch article, USGS scientists say the June 8 earthquake was a reminder for Hawaii Island to be prepared.

(BIVN) – The magnitude 5.3 earthquake that struck the South Flank of Kilauea volcano just after 7 a.m. on June 8 was the strongest quake in ten years and reminder to island residents, geologists say.

The earthquake is the focus of this week’s Volcano Watch article, written by U.S. Geological Survey Hawaiian Volcano Observatory scientists.

On June 8, 2017, many Island of Hawai‘i residents were awakened by a sharp jolt just past 7 a.m. This natural wake-up call was caused by a magnitude-5.3 earthquake, the largest to strike Hawaii in over a decade.

As seismic waves rippled across the island, people described a roaring or rumbling sound as vibrations passed through their homes, rattling items on walls and shelves. Almost 1000 people submitted felt reports for the earthquake through the USGS Did You Feel It? website. Submissions came in from as far away as the leeward coast of O‘ahu some 500 km (310 miles) distant.

The USGS Hawaiian Volcano Observatory (HVO) received several reports of moderate shaking from across Hawaiʻi Island. There were also reports of minor damage from Volcano to Hilo, including a small rockfall on the Chain of Craters Road in Hawai‘i Volcanoes National Park.

Mahalo to everyone who submits Did You Feel It? (DYFI) reports after an earthquake. By doing so, you contribute to the USGS monitoring program, and help us keep you informed and safe.

Data from DYFI reports are translated into felt intensity, which describes what people experience during an earthquake. The USGS also records ground shaking intensity with strong motion accelerometers.

The geographic distribution of these intensities is portrayed through a USGS product called ShakeMap. The maps combine both quantitative data from seismometers and qualitative data from DYFI felt reports to paint a picture of shaking for each earthquake. This information aids post-disaster response, as well as earthquake risk mitigation.

The ShakeMap for the June 8 earthquake shows that the strongest ground motions corresponded to a maximum intensity of VI on the Modified Mercalli Intensity Scale. An intensity value of VI means that strong shaking was felt by all and minor damage occurred in the earthquake vicinity. This was the highest intensity recorded for any earthquake in the State of Hawaii since the Kīholo Bay and Māhukona earthquake sequence in 2006.

Instruments near the epicenter of the June 8 earthquake recorded maximum accelerations of 0.16g, which is 16 percent as strong as Earth’s gravitational force. Accelerations vary up and down as the seismic waves pass. If the earthquake had been larger (greater than magnitude-6.0), the acceleration likely would have exceeded 1g, or 100 percent times Earth’s gravity. When that happens, objects can be lifted off the ground momentarily. People have observed such ‘jumping rocks’ during past large earthquakes on the Island of Hawai‘i.

The June 8 earthquake occurred at a depth of 7 km (4 mi) beneath Kīlauea Volcano’s south flank, slightly above the fault separating the old oceanic crust from younger volcanic rocks that make up the island. Earthquakes along this fault occur when the massive volcanic pile shifts relative to the oceanic crust. The largest Hawaiian earthquakes in recorded history, including the destructive magnitude-7.9 and 7.7 events in 1868 and 1975, respectively, have occurred along this interface.

Thankfully, the impacts of last month’s magnitude-5.3 earthquake were relatively light. But the next big earthquake could have a different outcome. Before it happens, create a quake-safe plan, put together an emergency kit, and keep it handy. And the next time you feel strong shaking, remember these three actions: Drop, Cover, and Hold on!.

If you’re near the beach when a strong earthquake strikes, head to higher ground away from the shore as soon as shaking stops. This could save your life in case of a locally-generated tsunami.

To learn more about how you, your family, and co-workers can prepare for the next big earthquake, we invite you to participate in the Great Hawaii ShakeOut on October 19, 2017. The ShakeOut website features educational videos, flyers, and other materials that describe what to do in a variety of earthquake hazard scenarios.

The June 8 earthquake, our largest in over a decade, served as a wake-up call in more ways than just disturbing sleep. It reminded us that Hawai‘i is earthquake country, and we all should be prepared for the next one. 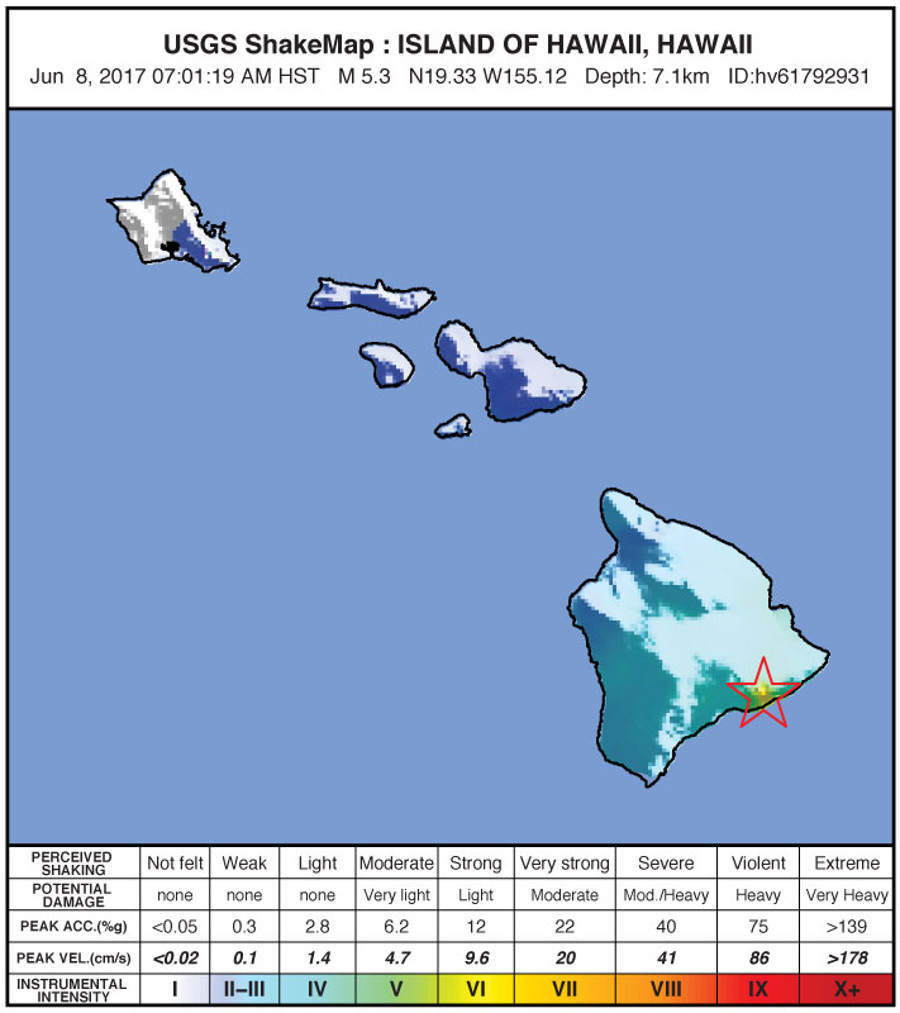 The above ShakeMap for the June 8, 2017, earthquake shows that strong intensities (yellow color) occurred near the epicenter, and weak intensities could be felt as far away as O‘ahu. Maps like this are produced by a combination of data from strong motion accelerometers and felt reports submitted by the general public through the USGS Did You Feel It? website