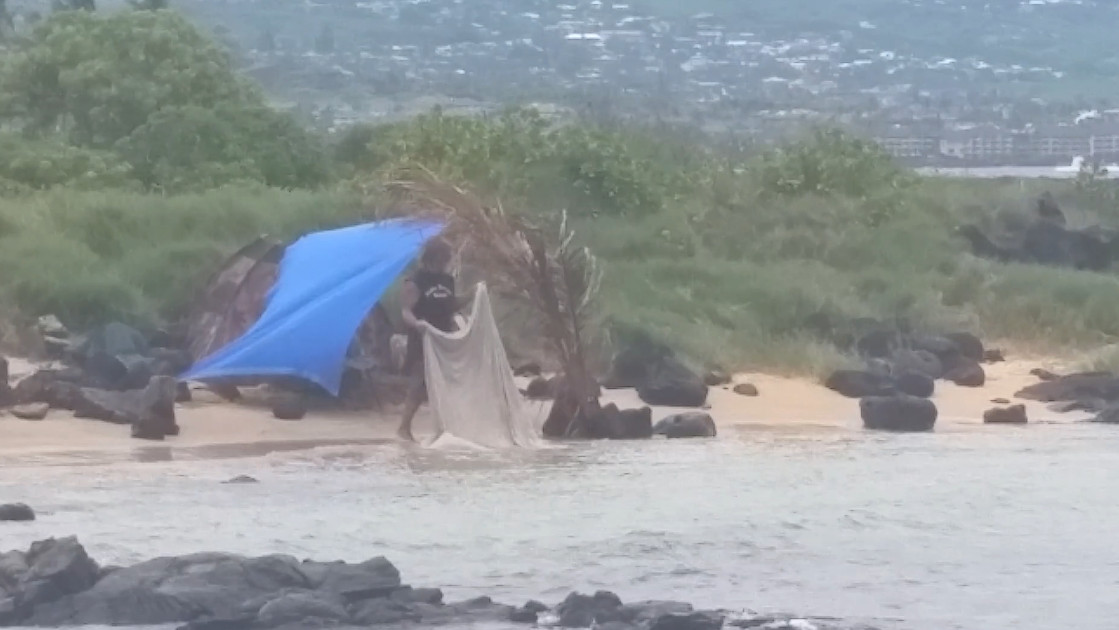 Image from video by Bolo Mikiela Rodrigues on Facebook

KAILUA-KONA, Hawaii - The day before the county will enforce a no-camping policy at the Old Airport Park in Kona, Mayor Kim issues an Emergency Proclamation regarding the Hale Kikaha Project.

(BIVN) – Today, the County of Hawai’i will begin enforcing a no-camping policy at the Old Airport Park in Kona. All belongings and housing structures in the park must be removed by that date, officials say.

Homeless people camping at the park are being instructed to leave, and a limited number of spaces at homeless shelters are available to receive them.

WHEREAS, homeless individuals have established an encampment at the County of Hawaii’s Old Kona Airport Park, District of South Kona, County and State of Hawaii; and

WHEREAS, the homeless individuals at the Old Kona Airport Park were removed from the park grounds; and

WHEREAS, these homeless individuals could be temporarily sheltered at the grounds of the Hale Kikaha Project located in the District of North Kona County and State of Hawaii; and

WHEREAS, these unsheltered homeless individuals are without access to adequate bathroom, shower and living facilities; and

WHEREAS, these unsheltered homeless individuals require health and social services in order to maintain themselves safely and in reasonable health; and

WHEREAS, the lack of secure, safe and sanitary shelter, and adequate health and social services for these homeless people is endangering the health, safety and welfare of these people and pose a threat to the environment and public health, and demands emergency action to prevent or mitigate suffering, injury, loss, or damage to persons and property; and County of Hawaii is an Equal Opportunity Provider and Employer

WHEREAS, pursuant to section 127A- 13( b)( 1) Hawaii Revised Statutes the Mayor has the authority to relieve hardships and inequities, or obstructions to public health, safety or welfare found by the Mayor to exist in the laws of the County and to result from the operation of federal programs or measures taken under Chapter 127A Hawai’ i Revised Statutes, by suspending the county laws, in whole or in part, or by alleviating the provisions of county laws on such terms and conditions the Mayor may impose; and

WHEREAS, pursuant to section 127A- 13( b)( 2) Hawai’ i Revised Statutes the Mayor has the authority to suspend any county law that impedes or tends to impede or to be detrimental to the expeditious and efficient execution of, or to conflict with emergency functions, including the laws by which Chapter 127A Hawai’ i Revised Statutes, specifically are made applicable to emergency personnel; and

WHEREAS, due to the possibility of threat to the environment and public health to residents of the District of South and North Kona, Hawaii Island, and the need for government agencies and representatives from the private sector to mobilize and provide immediate services to our island residents, a state of emergency is authorized pursuant to Chapter 127A Hawai’ i Revised Statutes, and Chapter 7, Hawaii County Code.

NOW, THEREFORE, I, HARRY KIM, Mayor of the County of Hawai’ i, do hereby proclaim and declare that an emergency contemplated by section 127A- 14, Hawaii Revised Statutes has occurred in the County of Hawai’ i and hereby proclaim an emergency for the purposes of implementing the emergency management functions as allowed by law, effective August 1, 2017, and continuing thereon for 60 days or until further act by this office.

I FURTHER DECLARE, that pursuant to sections 127A- 13( b)( 1) and ( 2) the following County laws are suspended during the emergency period as they relate to the grounds of Hale Kikaha Project located in the District of North Kona, County and State of Hawaii:
1. Chapter 5 Building Code.
2. Chapter 25 Zoning Code.
3. Chapter 26 Fire Code.

IN WITNESS WHEREOF, I have hereunto set my hand and caused the Seal of the County of Hawaii to be affixed. Done this 1st day of August, 2017 in Hilo, Hawai’ i.

The county says outreach workers from HOPE Services, Veterans Outreach, the West Hawai’i Health Clinic, Access Capabilities, County Parks and Recreation, Office of Housing and Community Development, the Mayor’s Office (Kona), and faith-based volunteers, have been reaching out to the people living in the park.

HOPE Services is one of the organizations reaching out to the people living in the park. The organization is “coordinating existing housing inventory, and available housing options are being offered to the most vulnerable homeless people first, i.e., families, the elderly, chronically homeless, as well as those with substance abuse or mental health issues,” the county says.

“HOPE Services is doing their very best to house those who qualify in the short time we have before August 2,” said Assistant Housing Administrator Lance Niimi in a media release. Niimi asked that the public notify his office if other housing options may be made immediately available for the homeless. “Every bed space helps.”