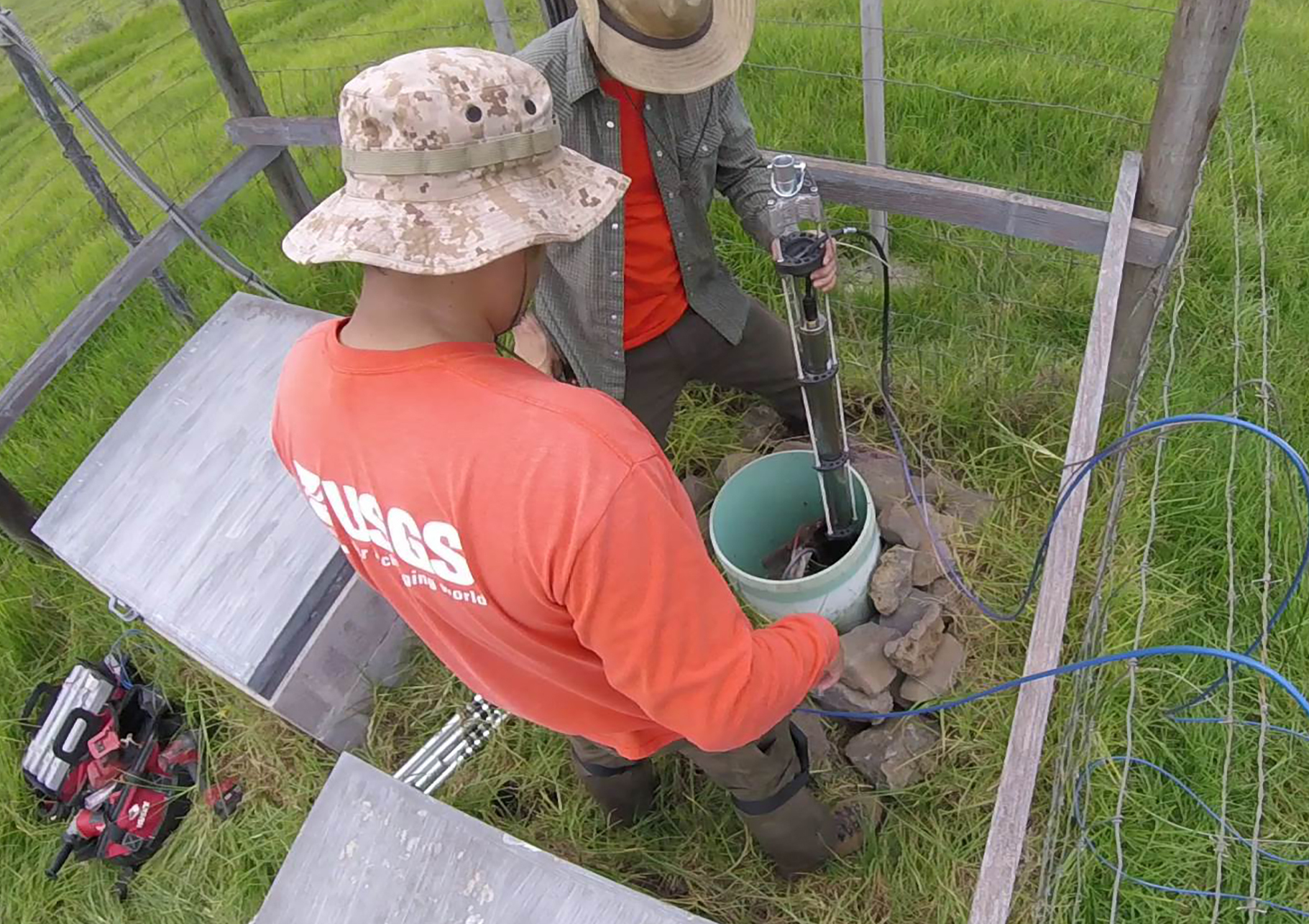 USGS Hawaiian Volcano Observatory field engineers begin the process of lowering a tiltmeter into a deep borehole on the west flank of Mauna Loa. USGS photo. 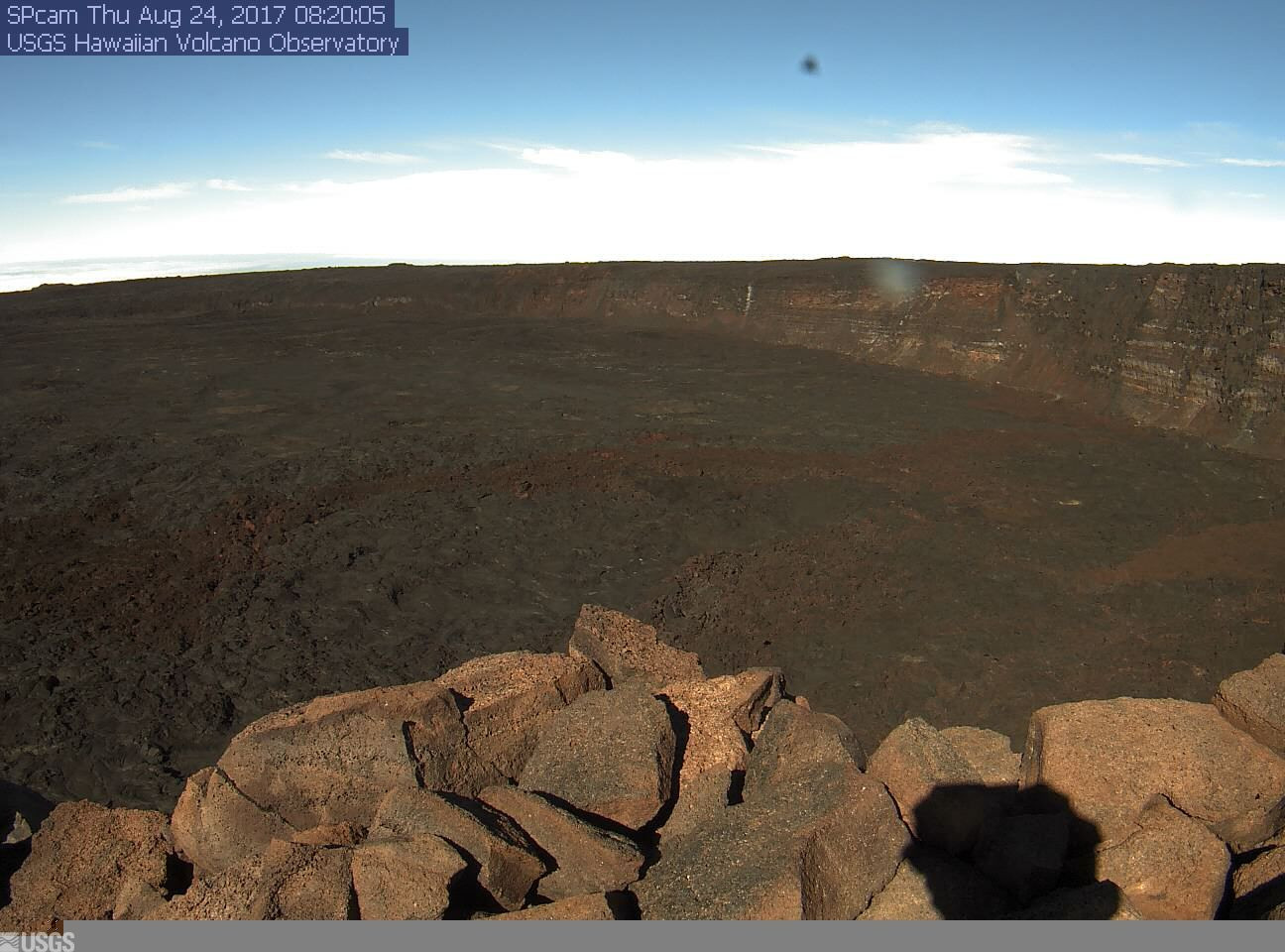 USGS Webcam: the South Pit of Moku‘āweoweo Caldera at the summit of Mauna Loa.

(BIVN) – Mauna Loa is not erupting, however scientists say GPS measurements continue to show deformation related to inflation of a magma reservoir beneath the massive volcano’s summit and upper Southwest Rift Zone. During the past week, small-magnitude earthquakes continued to occur beneath the volcano, the USGS reports, primarily in the south caldera and upper Southwest Rift Zone, at depths less than 3 miles. Additional deeper events occurred beneath the upper west and southeast flanks of the volcano.

No significant changes in volcanic gas emissions were measured, the scientists say.

In order to bring us such a detailed weekly activity update, scientists rely on sensitive – and functioning –
equipment. The use of creative engineering to monitor Mauna Loa is the focus of this week’s Volcano Watch article, written by U.S. Geological Survey Hawaiian Volcano Observatory scientists:

The USGS Hawaiian Volcano Observatory (HVO) has a long tradition of innovation when it comes to the tools that we use to monitor the status and activity of volcanoes. Since HVO’s inception in 1912, observatory staff have developed techniques and manufactured instruments that have been used worldwide for volcano monitoring.

The tradition continues to this day, with HVO continually adapting and creating equipment and methods in response to changing conditions and to take advantage of new technologies. For example, a recent equipment installation challenge was met with enthusiasm as an opportunity to design and implement new tools.

The challenge was presented by a malfunctioning tiltmeter in a deep borehole on the west flank of Mauna Loa Volcano. The tiltmeter, which was originally installed 17 years ago, had a long and fruitful career before giving up. But we were not ready to let go of the data it provided, especially considering how restless Mauna Loa has been over the last few years.

This particular installation is part of a network of several deep sites on Mauna Loa that include seismometers, tiltmeters and strainmeters. These extremely sensitive instruments are housed in boreholes more than 15 m (50 ft) deep to help isolate them from the effects of temperature, rainfall, and atmospheric pressure fluctuations, all of which can cause spurious signals.

The tiltmeter itself is a metal tube, 1 m (3 ft) long and 5 cm (2 in) in diameter, which contains precision electrolytic sensors that detect tiny tilt variations in two perpendicular directions. It can measure tilts smaller than 1 microradian, which is about the same as the slope created by putting a dime under one end of a board that is 1 km (more than half a mile) long!

Now imagine lowering that tube about 15 m (50 ft) into a 10 cm (4 in) diameter hole that also has a bunch of cables (from the strainmeter, seismometer, and old tiltmeter) snaking up through it. You also have to position the tiltmeter so that it stays upright and doesn’t rest on any of those cables or the sides of the hole while you pour sand to keep it in place. Pretty tough, right?

But the challenge continues. Now add the requirement that you must orient the tiltmeter so that its sensors are aligned to north-south and east-west directions, or at least know the exact direction to which those sensors are pointing. This calls for some rather heroic feats of engineering.

The solution HVO’s technical crew came up with was to use computer assisted drawing (CAD) software to design a specialized jig that sits around the tiltmeter and gently channels all the cables out of the way while the instrument is lowered into the borehole. The jig was manufactured using a 3-D printer, which put down layer after layer of thermoplastic to build a solid object with customized specifications.

Another specially built apparatus holds the jig, the tiltmeter, a light, and a video camera that provides a real-time view of the tiltmeter’s descent as it is lowered into the borehole and positioned at the bottom.

Weʻre glad to report that the installation was successful, and the new tiltmeter is now faithfully recording ground tilt on the west flank of Mauna Loa. These data are sent back to the observatory via radio links so that HVO receives them in less than a minute.

Our hope is that this tiltmeter will help provide the earliest possible warning of rapid magma movement toward the surface, which would signal an impending Mauna Loa eruption. We also hope that these data will help us understand the processes and conditions that lead to eruptions so that we can continue to advance the field of eruption forecasting. Whatever the outcome, the innovation of HVO’s technicians will continue to be valuable well into the future, both in Hawai‘i and abroad.