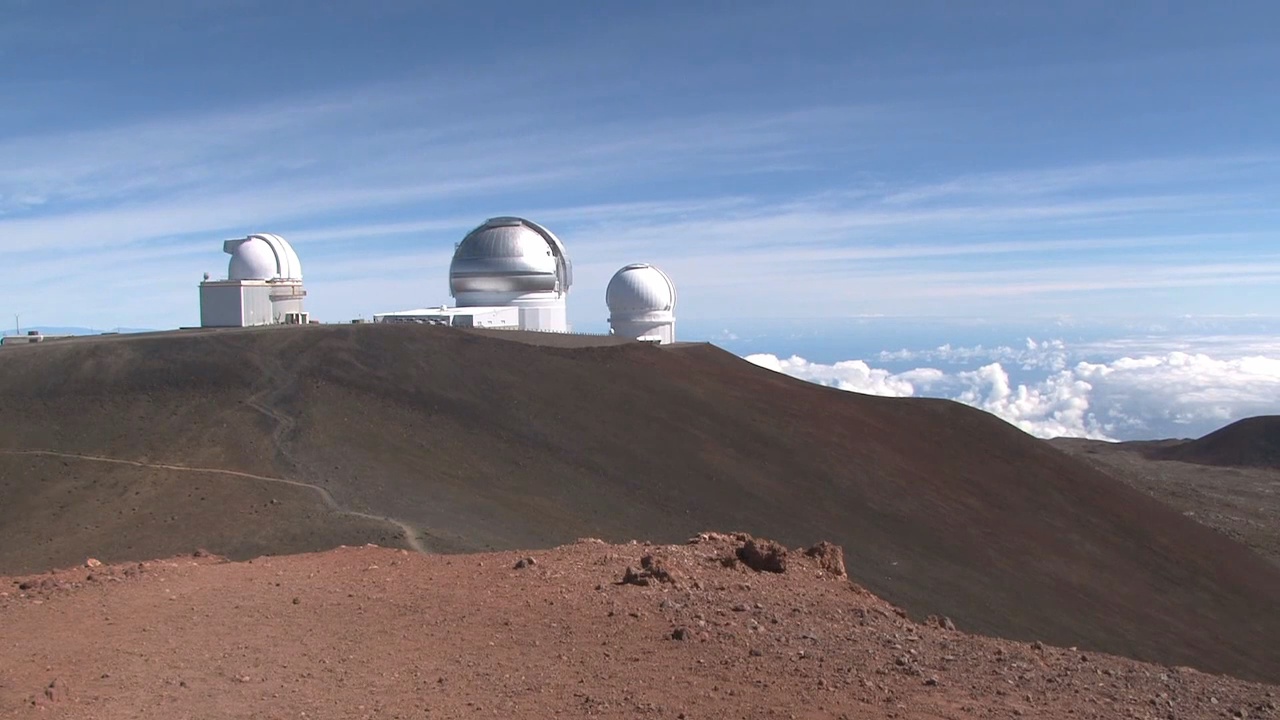 file image of observatories on the Mauna Kea summit

hearing officer's recommendation, the University lays out its future commitments should the Thirty Meter Telescope be granted a permit.

(BIVN) – The University of Hawaii-Hilo does not take exception to much of what the hearing officer, retired Judge Riki May Amano, recommended in her June 26 proposed order for the Thirty Meter Telescope contested case hearing. Amano says the conservation district use permit for the TMT should be granted to UH by the Hawaii land board.

In a six page document filed on August 21, university attorneys mainly requested typographical and grammatical corrections, and wanted to see mentions of “the University” clarified by substituting the word “UH-Hilo”.

However, the University did propose some substantive additional conditions, to be added after condition No. 9 of Amano’s Proposed Order.

From page five of the UH-Hilo exceptions document:

The following are proposed additional conditions of the Conservation District Use Permit (“CDUP”) to further explain and clarify the University’s decommissioning commitments:

Proposed New Conditions Nos. 10 through 13.1 The University shall meet its decommissioning commitments, as set forth in the letter from University President David Lassner to BLNR Chair Suzanne Case dated November 7, 2015, and in the Decommissioning Plan for the Mauna Kea Observatories, in accordance with the following conditions. Condition Nos. 10 through 13 shall be applicable only upon approval and development of the TMT Project.

10. The TMT Project site will be the last new area on Mauna Kea where a telescope project will be contemplated or sought by the University;

11. The University will decommission three telescopes permanently, as soon as possible and before TMT can go into Operation, and no new observatories will be constructed on those sites;

12. These commitments will be legally binding on the University and may be regarded as a condition of the University’s current leases, and of any lease renewal or extension proposed by the University, for Mauna Kea; and

13. Notwithstanding any lease renewal or extension, consistent with the Decommissioning Plan, at least two additional facilities will be permanently decommissioned by December 31, 2033, to include the Very Long Baseline Array antenna and at least one additional observatory.

The proposal is in line with Governor David Ige’s May 26, 2015 announcement of a 10 point action plan for the stewardship of Mauna Kea, issued at the height of the tensions over the TMT project. That was before the Hawaii Supreme Court vacated the observatory permit and remanded the matter back to the land board in order to conduct a second, now-concluded, contested case hearing.

A few days after the filing of exceptions, the University of Hawaiʻi Board of Regents approved a resolution affirming the university’s commitment to the collaborative stewardship of Mauna Kea’s cultural, natural, educational and scientific resources.

Lengthy, passionate testimony for and against the resolution took place at the August 24 meeting on Oahu, before the regents approved the resolution that “directs the university to move forward to build a global model of harmonious and inspirational stewardship that integrates traditional indigenous knowledge and modern science,” a press release stated.

WHEREAS, the Board of Regents believes that Maunakea can and should be a global model that provides inspiration, harmony and peaceful co-existence among culture, education, the environment and scientific discovery; and

WHEREAS, the Board of Regents for the University of Hawaiʻi embraced the university’s commitment to its responsibilities to Maunakea beginning with the adoption of the Maunakea Science Reserve Master Plan in 2000, the Maunakea Comprehensive Master Plan, Cultural Resources Management and Natural Resources Management Plans in 2009, and the Public Access and Decommissioning Plans in 2010; and

WHEREAS, the board and the university administration also aspire for the university to become a model indigenous-serving university and have committed to principles of sustainability across its mission; and

WHEREAS, the board now hereby affirms the commitment of the university to fulfill its obligations under the plans that have been approved, as well as its broader commitment to the community at large; and

WHEREAS, the board wishes to additionally acknowledge the dedicated work and commitment of the Office of Maunakea Management, the Maunakea Management Board, and the Native Hawaiian Kahu Kū Mauna Council, on behalf of the University of Hawaiʻi and the Board of Regents; and

WHEREAS, subsequent to the adoption of the various plans, and with the understanding that collaborative stewardship will continue to be prioritized on all Maunakea lands, the university has now agreed to return approximately 10,000 acres of land on Maunakea that it currently leases that is not used for astronomy, to the State of Hawaiʻi; and

NOW, THEREFORE, BE IT RESOLVED that the university intends to return the 10,000 acres to the State of Hawaiʻi if possible and pursue a new lease or land tenure for the reduced acreage that will support the continued viability of astronomical research and education in the State; and

BE IT FURTHER RESOLVED that the university work with the State, County of Hawaiʻi, Native Hawaiian organizations, and the broader community to evolve collaborative and coherent management and stewardship plans that are consistent with the Comprehensive Management Plan, and that are supported by appropriate administrative rules; and

BE IT FURTHER RESOLVED that the university make it a priority, including through additional financial support, to meaningfully increase the education and engagement of Native Hawaiian students, Hawaiʻi Island residents, and residents of the State of Hawaiʻi in the areas of astronomy, celestial navigation and exploration; and that such initiatives include an active educational and outreach program that highlights indigenous knowledge as well as enhanced student access to and utilization of Maunakea-based astronomical resources in the field; and

The Board of Regents, through this Resolution, hereby affirms its commitment to the collaborative stewardship of Maunakea’s cultural, natural, educational and scientific resources, and directs the university to move forward to collaboratively build a global model of harmonious and inspirational stewardship that is befitting of Maunakea.

Mayor Harry Kim sent a letter in support of the resolution, and the shift of Mauna Kea management towards a collaborative model that furthers the pursuit of “knowledge to make us a better people and better stewards of the land; an international symbol of world peace, and a living museum embracing the values and contributions of the people of the First Nation.”

“We are encouraged by the spirit and intent of the Resolution,” Mayor Kim wrote, “and look forward to working with the University and other stakeholders, such as the Office of Hawaiian Affairs, on the next steps to create a transformative independent body comprised of a carefully-selected representative membership to manage all of Mauna Kea consistent with this vision of peace and respect.”

Governor David Ige issued a statement after the resolution was passed.

“I am pleased that the University of Hawai‘i has affirmed its intention to take action to strengthen the collaborative stewardship of Mauna Kea and its resources,” Gov. Ige stated. “I look forward to working with the university and its partners to make meaningful changes that further contribute to the co-existence of culture and science on this special mountain.”