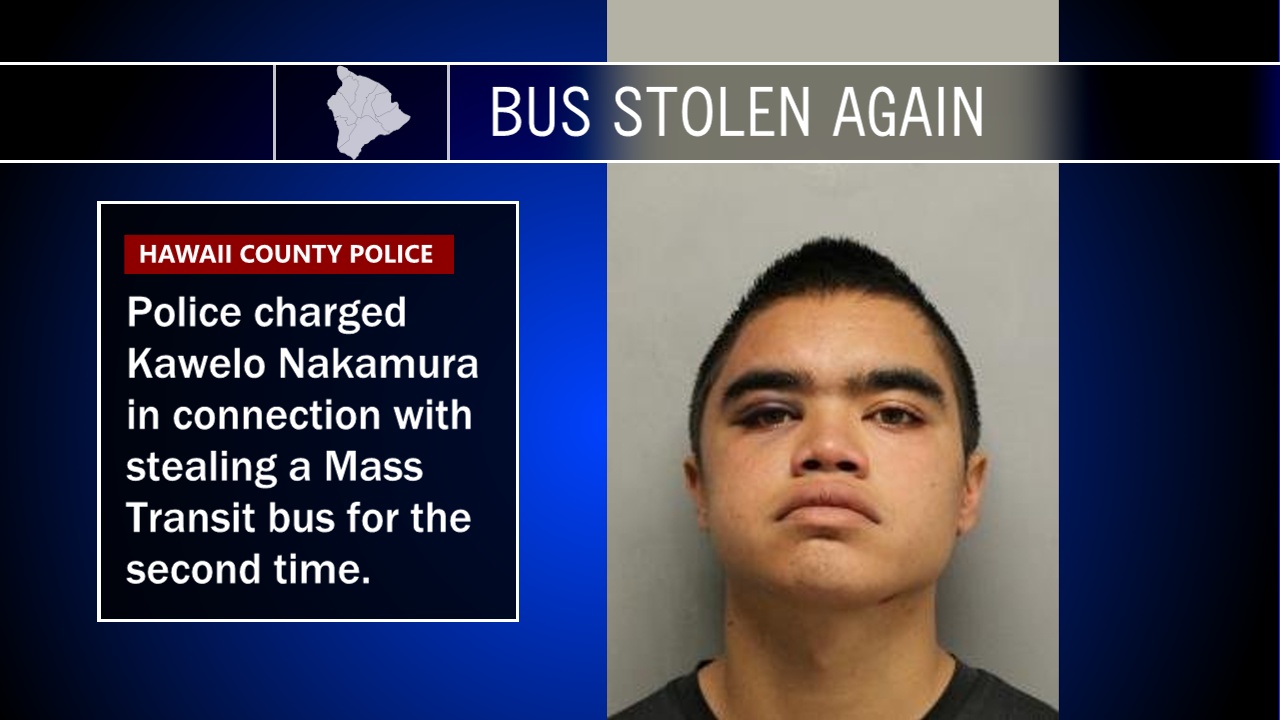 HILO, Hawaii - The 21-year-old Hilo man faces a new slate of charges in connection with the August 28 incident, just a few weeks after being arrested for stealing a bus on August 6.

(BIVN) – 21-year-old Kawelo Nakamura has been charged by police for stealing a county mass transit bus for the second time.

On Tuesday afternoon police charged Nakamura with one count each of first-degree theft, resisting an order to stop, second-degree reckless endangering, reckless driving, driving without a commercial driver’s license, unauthorized control of a propelled vehicle, criminal property damage and two counts of inattention to driving. His bail has been set at $42,000, and he is being held at the Hawaiʻi Community Correctional Center pending his initial appearance Wednesday afternoon (August 30), in District Court.

At 1:36 a.m., Monday morning (August 28), county employees reported that the lock on the gate to the County of Hawaiʻi Mass Transit base yard was cut and the gates were found opened. Reports received indicated that a 42-passenger bus was taken from the base yard and may have been seen heading in the Hāmākua direction over the Wailuku Bridge on Highway 19 and later on Queen Ka’ahumanu Highway near Mauna Lani.

At 6:24 a.m., police briefly pursued the bus after it was observed traveling into Hilo on Bayfront Highway, but the pursuit was discontinued in the interest of public safety. At 6:45 a.m., the bus was located at the Kawamoto Swim Stadium where the suspect, Kawelo Nakamura was taken into custody without incident. He was transported to the Hilo cellblock while detectives with the Criminal Investigation Section continued the investigation.

On August 6, police arrested Nakamura after stopping a stolen county bus on Highway 130 near Pāhoa. The day before, the bus had reportedly been involved in a hit-and-run traffic accident on Railroad Avenue in Hilo. Later that day, police were informed that the bus was stolen from the County’s Hilo base-yard.

At the time, Judge Diana Van De Car granted Nakamura supervised release, with conditions. Nakamura was scheduled to be back in court on August 24 for a preliminary hearing. Court records show Nakamura was indicted that same day and a Bench Warrant was issued on August 25.