HAWAII VOLCANOES NATIONAL PARK - Filming from an area closed to the public, the USGS Hawaiian Volcano Observatory captures a view of the restless Halema'uma'u crater that is rarely seen by visitors.

(USGS) Panorama taken from the eastern rim of Halema‘uma‘u. Mauna Loa spans much of the skyline near the center of the image; HVO and Jaggar Museum can be seen on the distant caldera rim (right side of image).

(BIVN) – Wispy fumes provided a clear view of the western wall of Halema‘uma‘u Overlook crater Wednesday morning, and scientists with the USGS Hawaiian Volcano Observatory took advantage of the opportunity by capturing some new images to share with the public.

Close-up views of Kilauea’s spattering summit lava lake were recorded in a video posted to the USGS website. “Spattering is common in Kīlauea Volcano’s summit lava lake,” the scientists wrote in the video caption, “and consists of many large bursting gas bubbles. The fluid nature of the lake can be seen when lava hits the wall and flows downward like syrup.”

“The thin, flexible nature of the crust is also shown here,” USGS said, “as the bursting gas bubbles rip and fold the thin skin on the lake.”

This video was taken from the rim of Halema‘uma‘u, an area that remains closed to the public due to ongoing volcanic hazards.

A wider view of Halema‘uma‘u also provided some a view of the “bathtub ring” just above the lava lake surface, marking a recent high stand of the lake. 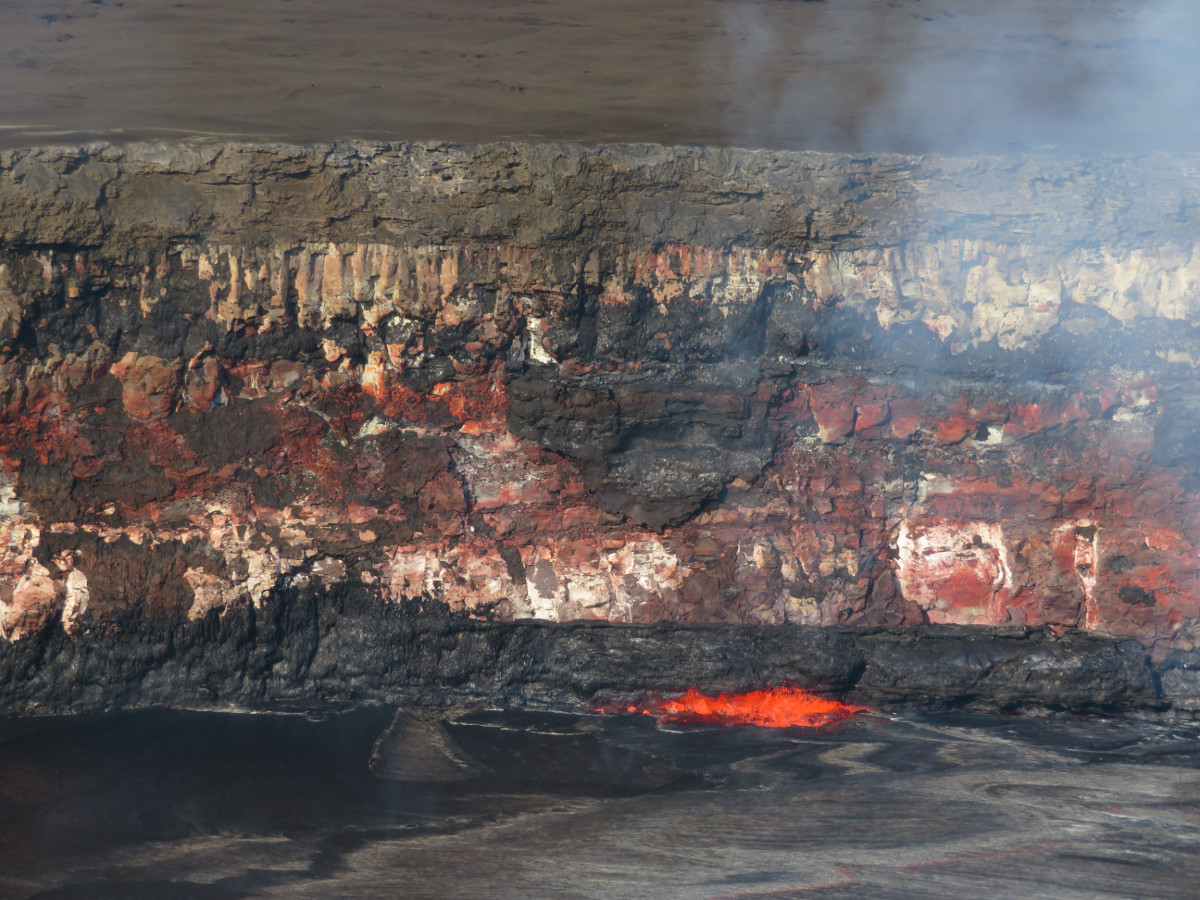 (USGS) Above the “bathtub ring”, a thick span of red, white and yellow rock is exposed in the crater wall. The colors originate from oxidation and alteration of older lava that filled Halema‘uma‘u in the 1960s and 1970s. Above the colorful rocks is an 8 m (26 ft) thick section of darker rock layers, which were formed by lava overflowing the vent rim in April and May 2015. The top of the photo shows the flat floor of Halema‘uma‘u, blanketed in a continuous layer of Pele’s hair.

Summit tiltmeters recorded slightly inflationary tilt over the past three days, consistent with the inflation phase of a summit DI event (see definitions below). The lava lake surface rose to about 31 m (102 ft) below the rim of the Overlook crater when measured this morning. Webcam views of the lava lake can be found at this webpage. Seismicity is within normal, background rates with tremor fluctuations associated with lava lake spattering. Summit sulfur dioxide emission rates remain high.