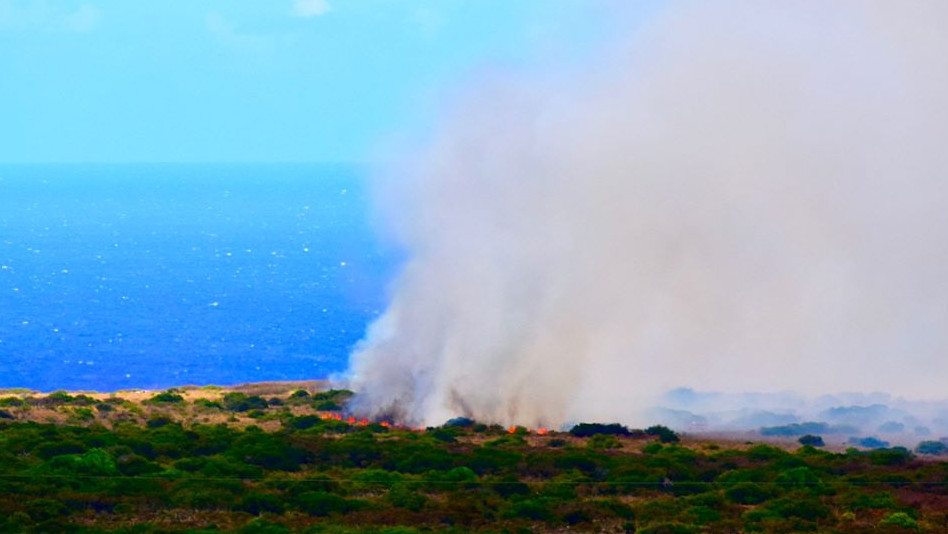 (BIVN) – The brushfire in Ka’u “grew substantially from prior operational period”, fire officials say, and was contained Saturday, “with no further fires outside of 4 wheel roads widened by bull dozers.”

No structures have burned or are in immediate danger, the fire department said.

The 1,600 acre fire is long, a Saturday evening fire dispatch stated, reaching from Waikapuna Bay to within .75 miles of Green Sands Subdivision, with “more than a dozen spot fires outside of the main burn area.” Spot fires rangde from 100 square feet to several acres, burning through uneven terrain described as “primarily cattle pasture, with some native trees and archeology of unknown periods.”

“Air support by two helicopters using water drops assisted ground units who were extinguishing fires that had jumped fire breaks,” the fire dispatch said. “By nightfall, the fire was contained, with no further fires outside of 4 wheel roads widened by bull dozers, creating a perimeter for the approximately 1600 acre fire.”

The cause of the fire remains undetermined. On Saturday evening, the fire department said it would remain on the scene overnight, and operations would resume in the morning with choppers and ground fire fighting.